US Consumers are Confident (That Things Could Get Worse)

Consumer sentiment fell to a 10-year low, according to the preliminary University of Michigan Consumer report. Citing the Delta variant, supply chain shortages and reduced expectations from the government’s economic policies, the report suggests consumer spending will remain lower though 2022.

Some observations from October’s survey: 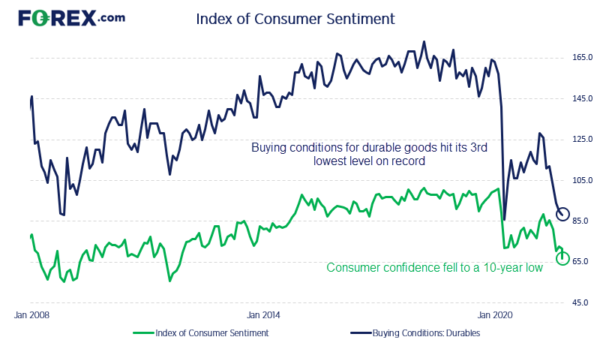 The high levels of growth are not likely to be sustainable with the current levels of inflation. Furthermore, concerns of elongated levels of inflation could be enough to cut back consumer spending to weigh on growth, and to some degree inflation as well, as demand presumably dies down. This is counter to the logic that ‘anticipation of rising prices can result in higher demand now’, but we have two ideas as to why ‘this time it is different’.

Moreover, if consumers are concerned about the future, they’re more likely to cut back on spending which will ultimately weigh on growth, as they opt to save money instead of chasing inflationary prices. And data within this survey suggests this may be the case.

Historically, consumers mostly expected their finances to improve. Not anymore.

Taking the chart below, the two ‘personal finance’ indices have seemingly topped out on the long-term charts to suggest a long-term cycle peaked in Q4 2019. And if we look at the spread between the two (expected – current) it shows two clear patterns. 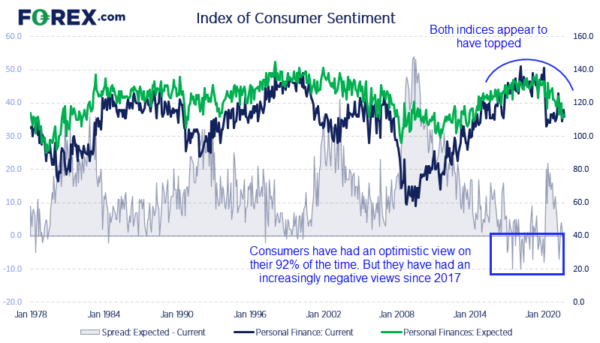 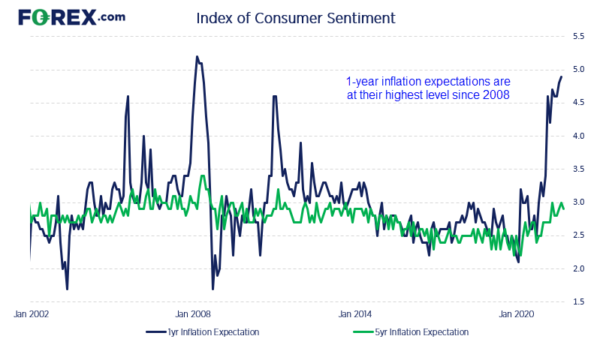 Now let’s throw inflation expectations into the mix, as the 1-year outlook for inflation has risen to 4.8% (its highest level since 2008). Is that what consumers want to see if they’re concerned about their finances? Probably not. And it is a good reason to tighten the purse strings if so. However, we expect inflation expectations to rise notably in next month’s report as it would likely include the reaction of hot consumer prices, which were only released last Wednesday. We would not be surprised to see 1-year inflation expectation rise above 5%, and perhaps closer to 6% than 5%.

So, is inflation transitory?

Possibly, and lower demand would help diminish upside pressures, but it does not solve the supply side issue of bottlenecks in the system. For inflation to come back down to anywhere near 2% next year, supply chains need to be fully functional. And we doubt that to happen quickly enough.

Yet for us, the biggest takeaway from this report is that consumers are clearly concerned with their finances alongside higher prices. We therefore suspect consumption to drop and help take some of the sting out of consumer prices, yet weigh more heavily on growth figures. And that leaves the Fed in a tight spot as they’ll likely need to raise rates to fend inflation at elevated levels, yet may be hesitant to do so if growth suffers.

So, it may be worth keeping an eye on today’s retail sales report to see if demand is actually dwindling. Although we’d expect it to come in strong next month due to Black Friday sales. But as we head into next year we’d need to see a material improvement in sentiment (and retails sales) to turn this dismal ship around, and until then it looks like growth will suffer in 2022

Last hurrah for the dollar?

Of course, anticipation of a hawkish Fed (having finally began tapering their balance sheet) has seen dollar bulls gain traction. The US dollar index is now at its highest level since July 2020 and seemingly a day or two’s trade away from 96.0. Bullish momentum has accelerated since the May lows and have respected a bullish trendline from the June low. Furthermore, a bullish engulfing candle formed yesterday to close above 95.0.

Over the near-term we fancy its chances of probing the resistance zone around 96.0 which also includes the upper trend channel. And perhaps it could even creep up that trendline and head for the 96.40 highs, assuming US yields continue to move higher with it. Yet now would be a good time to remember that December is traditionally a bearish month for the US dollar, and we could find that a correction is due as momentum peters out and Santa’s rally takes hold.