As a result of inflation and manufacturing data, fears started creeping into the markets of the dreaded “R” word – Recession.

OPEC+ meets this week on Wednesday and Thursday to discuss whether it should increase oil production in August more than the 648,000 bpd it promised last month.  In addition, last week, markets saw worse than expected PMI data from Europe and the US, as well as high CPI data from the UK and Canada. As a result, fears started creeping into the markets of the dreaded “R” word – Recession. This week, the inflation prints continue to roll out as the US will release its PCE data and the EU will release it June preliminary CPI.  In addition, manufacturing data continues to be released as well.  Markets will see China PMI, final PMIs from Europe and the US, as well as, US ISM data.  Will theses numbers continue to come out weaker than anticipated?

OPEC+ meets this week to discuss whether it should increase oil output by more than the 648,000 barrels per day in August that it promised at its last meeting.  In all likelihood, the Organization of Petroleum Exporting Countries will stick to the plan and provide markets with the scheduled output it had promised.  For one, as mentioned above, fears of recession are creeping into the markets.  If a recession does occur, there will be less of a demand for oil and less of a need for additional output.  In addition, Joe Biden is set to visit Saudi Arabia in July.  He is expected to discuss oil output while he there.

Last week, the UK released its inflation reading for May at 9.1% YoY.  In addition, Canada released its own CPI data for May at 7.7% YoY.  The UK and Canadian inflation prints were the highest since the early 1980s!  This week markets will get to see US PCE data for May and the EU Preliminary CPI for June.  The US Core PCE, which excludes energy and food prices, is said to be the Feds favorite indicator of inflation.  However, after the June FOMC meeting, Powell said that price pressures have broadened, and he is concerned about all inflation.  Does that mean that the headline PCE print will be a better gauge for the Fed to watch instead of the Core print?  Watch both carefully. Recall that last week as Powell was testifying to the Senate Banking Committee, he said that “It is a possibility our rate rises could cause a recession”. In addition, the May reading for the EU CPI was 8.1% YoY. On Friday, markets will get their first look at June’s preliminary CPI print.  8.3% is expected.  This print may help determine whether the ECB hikes rates by 25bps or 50bps at its July meeting!

Last week, markets got their first look at June PMI data.  The results in Europe and the US were worse than expected and markets began to fear an economic slowdown, or possibility even a recession.  This week, we’ll get to see the final readings of the PMI data for June.  If confirmed, concerns may be warranted.  In addition, China will release its official NBS Manufacturing PMI for June.  Expectations are for a headline print of 48.6 vs 49.6 in May.  This would be an unwelcome print as the number moves further below the 50 contraction/expansion level.  In addition, the US will release the ISM Manufacturing PMI for June.  Expectations are for a reading of 55 vs 56.1 in May.  However, given the recent worse than expected manufacturing data from the US, this print is at risk of coming out weaker.  Again, recall from testimony last week in which Powell said, it will be “very challenging to achieve a soft landing.”

Friday is the first day of the 3rd Quarter and a new round of earnings are ahead.  However, there are just a few more major names to round out the 2nd quarter which will report this week, such as NKE, BBBY, and MU.

In addition to the inflation and manufacturing data discussed above, there are a host of other economic data points due out this week.  They include US Durable Goods, the Gfk Consumer Confidence Index, CPI, and Unemployment Change from Germany, and Retail Sales from Japan and Australia.  Other important economic data is as follows:

Chart of the Week: Weekly Copper 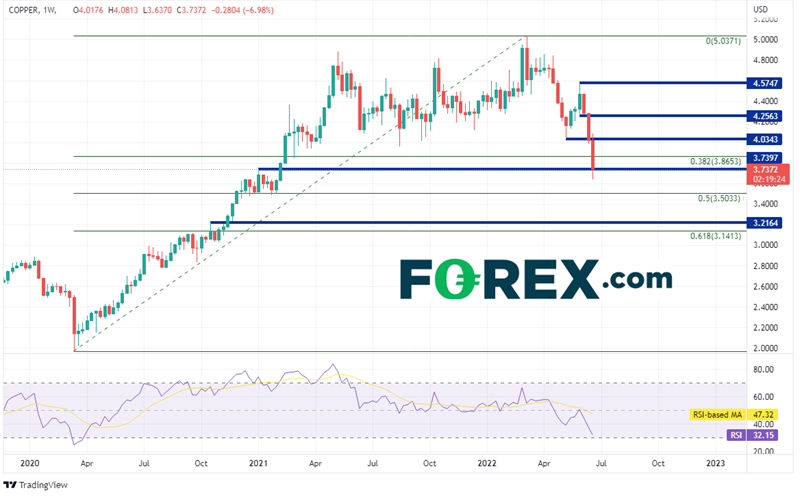 During the week of March 16th, 2020, Copper made a low of 1.9695.  Since then, it has rallied in dramatic fashion as the global pandemic began to ware off and demand began to rise again.  The industrial metal made a high of 5.0371 nearly 2-years later during the week of March 7th. Price has been selling off since then, and last week, copper fell over 7% as recession and lack of demand worries crept into the markets. The low of last week was 3.637, just below the 38.2% Fibonacci retracement level from the lows of March 2020 to the March 7th highs, near 3.8653.  It also closed at horizontal support near 3.739.  If price continues lower, the next support is at the 50% retracement from that same timeframe near 3.5033, then horizontal support at 3.2164.  However, if support holds and price bounces, horizontal resistance is at 4.0343, 4.2563, and the highs from the week of May 30th near 4.5747.

This week, inflation data and manufacturing data continues to roll out.  Will worries of a recession continue to rule the markets?  In addition, OPEC + meets to decide whether to increase output in August more than already promised.  However, it seems unlikely they will do anything.  Continue to watch commodity prices, especially copper, to gauge the health of the economy and whether traders think a recession is ahead!