As my colleague Fawad Razaqzada noted earlier today, the euro spiked briefly after this morning’s ECB meeting before reversing violently back to the downside in a mirror of yesterday’s price action in the US dollar.

While the ECB’s plan to end its quantitative easing program at the end of the year was a hawkish development, traders had already anticipated that decision; instead, it was the central bank’s comment that it would refrain from raising interest rates until after summer of 2019 that caught the market off guard. As a result, we’ve seen the single currency plunge against all of its major rivals, including a 1.5%+ drop against the greenback so far today.

The price action in EUR/CHF is particularly interesting. The European cross is showing a big “bearish engulfing” candle on the daily chart, signaling a shift toward strong selling pressure after the late May/early June bounce off its 9-month lows near 1.1400. As the chart below shows, the bounce was relatively shallow, stalling out between the 38.2% and 50% Fibonacci retracements of May’s collapse.

The strong bearish momentum through the middle of this quarter, combined with the bearish engulfing candle on the daily chart, suggests that the sellers have retaken control in this pair. If that is indeed the case, EUR/CHF could drop to revisit Q1 support near 1.1500 or last month’s low below 1.1400 from here. If the pair is somehow able to overcome the near-term bearish sentiment and break above 1.1650, bulls will likely look to target the 50% (1.1685) or 61.8% (1.1760) Fibonacci retracements next. 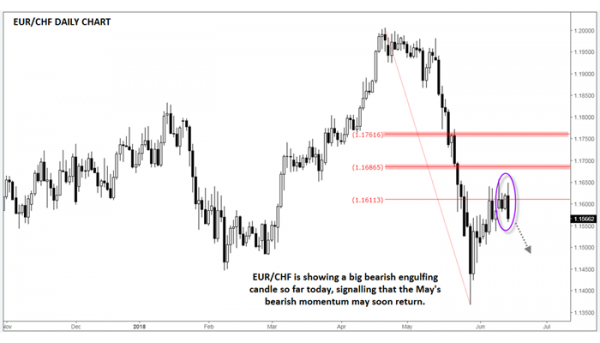