As US traders return to their desks after yesterday’s bank holiday, we’re seeing a bit of a “Turnaround Tuesday” emerge in the FX market, with the US dollar falling against all of its major rivals after showing relative strength in yesterday’s trade (see “Dollar Index Holding Above Key Area in the Mid-95.00s” for more).

While the broad dollar index is still (barely) holding above a key previous-resistance-turned-support level, the greenback’s near-term outlook is far more suspect against the Japanese yen. Last week, USD/JPY’s consistent rally brought the pair up to test a critical previous resistance level near 114.50. As the weekly chart below shows, bears had stepped in to stop the last three rallies (in May, July, and November of last year) into that area.

Unfortunately for those with a bullish persuasion, the early evidence suggests that the bears are defending that level once again. USD/JPY sold off sharply to close last week (despite generally bullish Fedspeak and jobs data), and has followed through with selling pressure through the first half of this week as well.

Rates formed a “bearish pin,” or inverted hammer, candle last week. For the initiated, this candle signals an intraweek reversal from buying to selling pressure and often marks a near-term top in the market. Combined with the strong resistance level in the mid-114.00s and the bearish continuation so far this week, the near-term odds suggest that USD/JPY may dip further over the next few days/weeks. There’s little in the way of meaningful previous support until around the 110 handle, though near-term buyers may step in around the Fibonacci retracements of the August-October rally (not shown) near 112.75 (38.2%), 112.15 (50%), and 111.60 (61.8%). 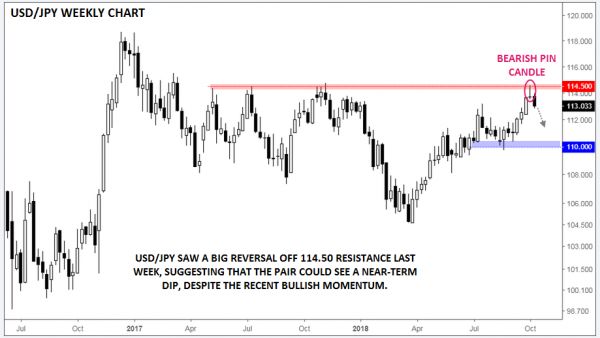 USD Index Outlook: The Dollar Falls Across the Board after ECB

ECB Meeting Is In The Focus Of Attention

EURUSD Pulls Back From 3-Month Top