Brexit developments continue to draw all the headlines, with my colleague Fawad Razaqzada characterizing today’s cabinet resignations as a disaster for PM May. While the updates from the UK continue to come in hot and heavy, we’re aware that some readers may be suffering from ‘Brexit fatigue’; thankfully, there are plenty of other market opportunities to highlight, including in major US stock indices.

After gapping lower this morning, the S&P 500 has fought back to breakeven after losing sessions the past five days. To put it politically, we’re highly skeptical of President Trump’s claim that the selloff is due to fears of ‘Presidential Harassment’ in the wake of Democrats taking control of the House of Representatives. Instead, forward-looking equity traders are increasingly worried that the economy may be reaching peak growth.

According to the earnings mavens at FactSet, the ‘blended’ earnings (using actual results for the 90%+ of the companies that have reported and estimated earnings for the companies that have yet to report) for the S&P 500 are expected to grow at 25.2% year-over-year, which would represent the highest growth rate since 2010. While the strong tax-cut-fueled growth is expected to carry over into next quarter, the outlook for earnings growth starting in Q1 2019 is more mediocre.

In other words, traders are not rewarding strong earnings reports and are punishing earnings misses more than usual, indicating elevated concern about future growth in corporate profits.

Technically speaking, the S&P 500 is in the midst of a brutal week, with the index trading nearly 4% lower than Friday’s close. Prices have now completely ‘filled’ the bullish gap from the end of October. Given the relentless selling pressure so far this week, we could certainly see a bounce into the weekend as bears take profits. That said, the longer-term structure is ominous for bulls, especially after the false breakout to record highs in August/September, a move that accompanied by a bearish divergence in both the weekly (not shown below) and daily RSI indicator.

In the short term, bulls will need to see rates break above last week’s high near 2815 before growing more constructive on the index. Meanwhile, bears will look to take the pair down toward previous support levels at 2595, 2553, and the yearly low at 2533 heading into the holiday season. 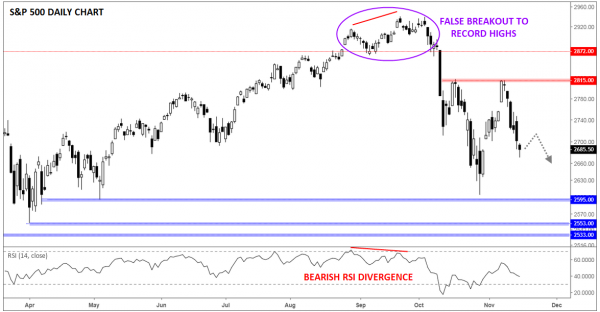