The Dollar Index is trading near the top of its 6-month trading range ahead of Friday’s US jobs report. The greenback’s strong performance is surprisingly to say the least given the fact, for example, that the Federal Reserve recently made a big dovish shift in its policy stance. Obviously dovish central banks elsewhere help explain away some of the dollar’s bizarre strength. Even so, it is remarkable that the dollar is still showing this much strength despite the Fed’s U-turn on interest rates. Not only do rate setters at the central bank expect to hold interest rates unchanged this year, the markets have gone a step further by pricing more than 50% odds of an interest rate cut in 2019. Are investors being unreasonably too dovish or is the Fed being too complacent over the risks facing the economy?

Tomorrow’s jobs report could provide some answers and it may help fuel the dollar’s next move. A very poor nonfarm payrolls report may finally help to derail the dollar’s rally, while a surprisingly strong figure could cause the DXY to breakout above its key resistance range in the 97.47-97.71 area. In the event of a potential breakout, the next question would be this: Can the dollar form a base above this 97.47-97.71 technically-important area, given the central’s dovish stance? We would turn negative towards the dollar if the bulls fail to hold the breakout (i.e. in the event of a fakeout) above this resistance zone. In any case, we will turn decidedly bearish if and when the DXY eventually falls below its most recent low at 97.75. 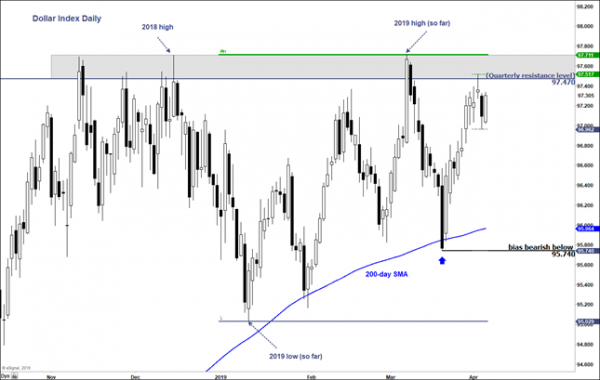