Dollar Index Uptrend Intact, Bulls Watching For A Break Above 97.70

In the last 30 hours alone, we’ve discussed the outlooks in EUR/USD, GBP/USD, and AUD/USD, but we haven’t reset the bigger picture outlook for the world’s reserve currency.

The US Dollar Index was able to shrug off the weaker-than-expected April Retail Sales report, but it finally succumbed to selling pressure on news that President Trump would delay tariffs on EU automobiles.

Turning our attention to the chart, the dollar index broke above previous resistance in the 97.70 late last month, but bulls were unable to maintain that move. Over the past three weeks, the index has formed a “descending wedge” pattern; despite its name, this pattern is generally seen as bullish, especially when it comes in the context of a longer-term uptrend, as we see today: 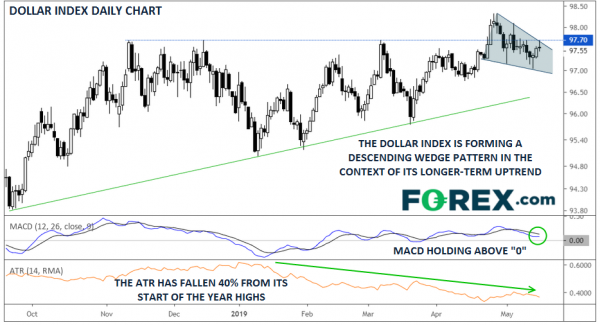 Furthering the optimistic perspective, the MACD indicator is holding in bullish territory above the “0” level, signaling generally bullish momentum. Crucially, the index’s average true range (ATR) has fallen 40% from its start-of-the-year highs. Because market volatility tends to be cyclical, the current low ATR reading could hint at a higher-volatility breakout in the coming days.

As it stands, the chart favors a bullish breakout in the buck and a potential run toward 98.50 or 99.00 from here. That said, a break below Monday’s low near 97.00 would signal that the bulls are losing momentum and could foreshadow drop toward the longer-term bullish trend line near 96.50 or lower.