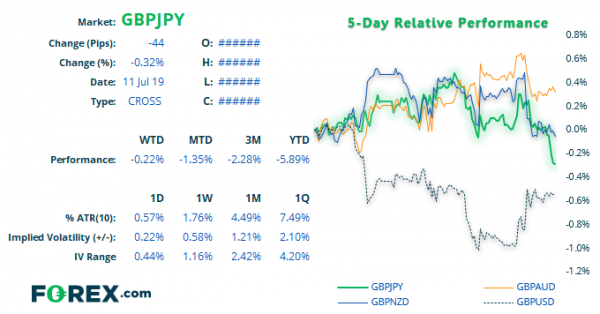 GBP weakness persists with it falling against all crosses parts from the USD. Here are the three setups we prefer from a reward to risk perspective.

Data was mixed for the UK yesterday. Industrial and manufacturing output missed expectations following their large drops in May. Whilst they did rebound to a degree, it’s a minor victory at best given it was fuelled by a delay in car plant closures. GDP great at 0.2% versus 0% expected, and the annual rate was upwardly revised to 1.5% YoY (from 1.3%). Construction output also slightly beat expectations. However, economists see little to get excited about in the numbers and see further weakness ahead for the UK economy.

Furthermore, dovish comments from BOE’s Tenreyro has weighed on Sterling, suggesting a rate cut would be more likely in event of a no deal Brexit and sees no pressure to vote for a UK rate hike any time soon. A dovish Powell yesterday may have been enough to lift GBP/USD from its lows yet has done little to lift Sterling against other peers. Whilst its remains in strong downtrends against all other majors, the following three appear the most appealing from a reward to risk perspective. 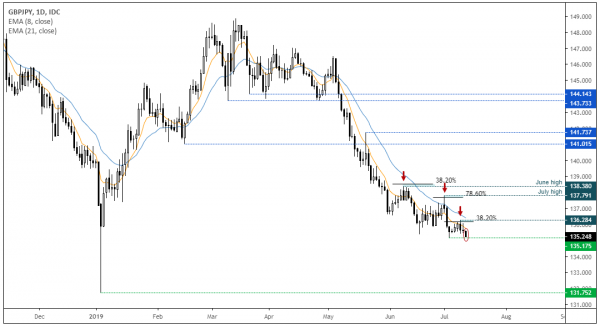 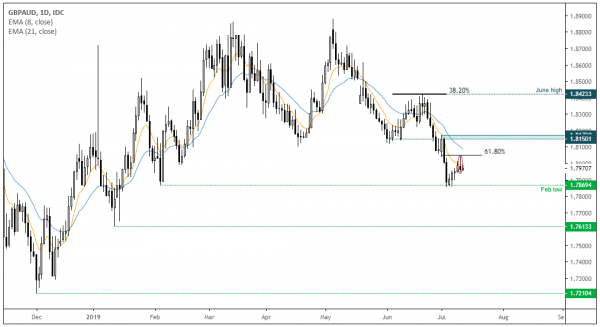 GBP/AUD could be setting itself up for a short swing trade. A larger bearish reversal appears to be playing out since its break beneath 1.8100, and momentum has remain bearish overall since stalling at 38.2% Fibonacci level after an underwhelming rebound. We’re now looking to identify a higher low. 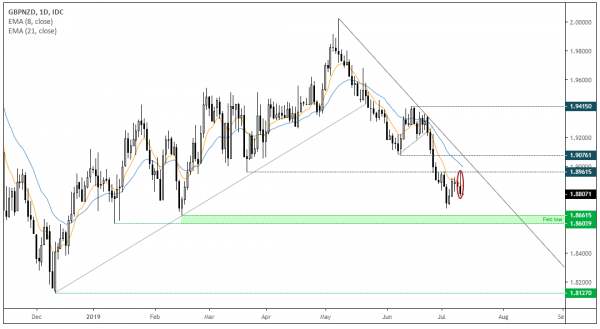 Bearish Engulfing candle on GBP/NZD suggests the high is in. Since breaking out of compression, GBP/NZD’s bearish trend has developed nicely and now brings the 1.8660 low back into focus.