Gold has risen sharply ever since bottoming out at $1160 in August 2018, with the rally gaining renewed momentum in May this year. But after a 4-month rally, the precious metal looks overbought and could be in for a correction of some sort. This won’t necessarily be a bad thing as it would reduce short-term technical overbought conditions. However, while the metal has hit key resistance in the $1555 area, it is yet to show a clear bearish reversal sign. Still, given the following considerations, I favour the downside for now:

The Dollar Index has hit a new high on the year and is up for the 4th consecutive day. The greenback has been supported thanks mainly to weakness in European currencies with the euro, pound and franc all losing out in recent days. Commodity dollars have also remained soft while the yen has eased back on recent revival of hopes for a trade deal between the US and China. Usually, when the dollar appreciates, buck-denominated gold falls out of favour.

Stocks have meanwhile found renewed support since last week on US-China trade deal optimism and loose central bank policy. The S&P 500 rose for the first time in three weeks while Germany’s DAX scored its first weekly gain in 5 weeks. The rebound in stocks reduce the appeal of haven assets, which includes gold.

There are also several reasons from a technical point of view that point to weaker gold prices: 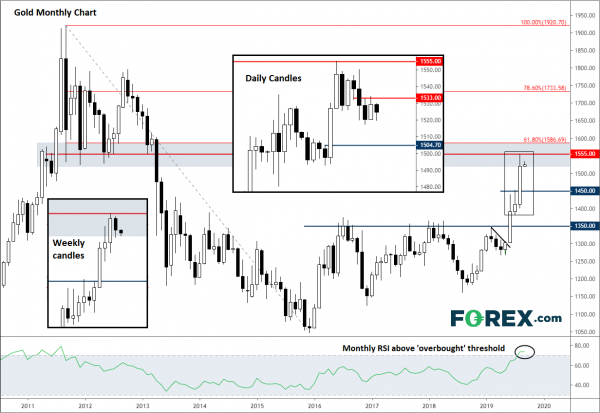 Given the above considerations, I would not be surprised if gold prices broke lower from here. The next potential support comes in around $1450 on the weekly time frame, although $1504.70 is also an interesting level to watch as it marks the nearest breakout point on the daily.