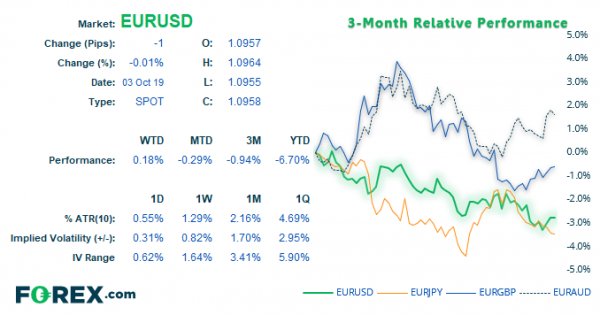 Sentiment-wise, the USD is on the back foot following the deterioration of ISM manufacturing data. Yet we’d argue the dollar’s weakness could be temporary, like when the USD weakens following a Fed cut only to see it appreciate over subsequent weeks (even if counterintuitive to conventional wisdom regarding rates). If ISM manufacturing is signalling a weaker economy and traders expect the Fed to ease, then it may not take too long for the same pattern to play out; the dollar falls after weaker, bullish hands have been shaken out before turning materially higher. Of course, other factors are it play but we’re focussing on the negative reaction that ISM appears to have prompted. Besides, the dollar’s trend remains bullish, so we’ll monitor price action on EUR/USD for a potential short opportunity. 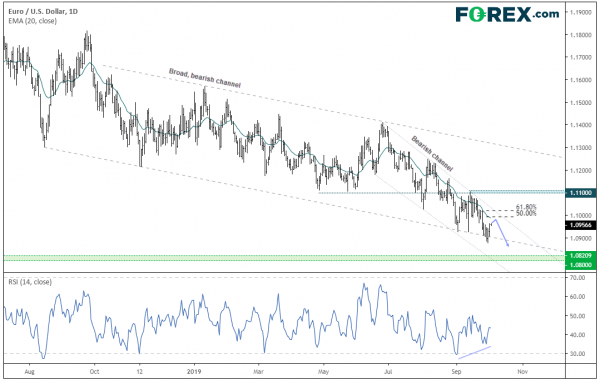 EUR/USD remains within a broad bearish channel which began in August 2018. However, with a span of around 400-pips, the channel could allow for some broad, counter-trend rallies within it. We’ll continue to monitor its potential for a larger counter-trend rally, but over the near-term greater focus can be placed on the smaller bearish channel which could signal fresh lows. Moreover, price action has already tested the lower bounds of the broader channel so perhaps it’s already on its last legs. A bearish divergence formed with RSI and prices are retracing from recent lows, so we’ll look for signs of weakness below resistance before assuming a corrective high is in. 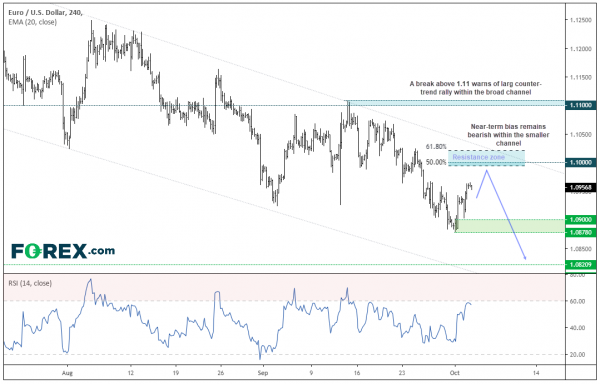 Key data to watch this week includes ISM Non-manufacturing data today and of course Nonfarm payroll employment tomorrow. This could be a rare month where the NM-PMI is more important than payrolls, as markets are so focussed on PMI weakness. If NM-PMI falls notably and closes its gap with manufacturing, it could be another bout of USD weakness and we’d expect a deeper retracement on EUR/USD. Yet, if it does what is usually does and expands at a handsome rate, perhaps traders will re-examine their bearishness to the USD and help place a cap on EUR/USD gains, before turning lower (if NFP outperforms expectations).