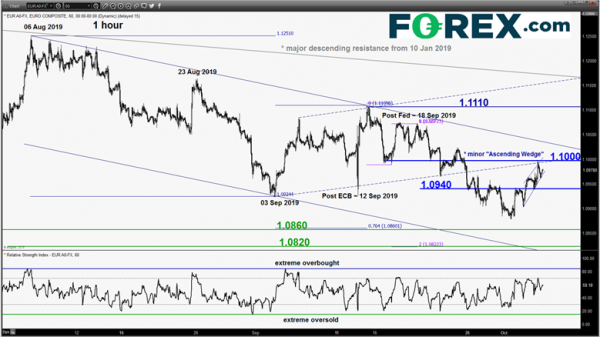 The pair broke above the 1.0950 short-term resistance as per highlighted in our previous report (click here for a recap) on the backdrop of a weaker than expected U.S ISM Services PMI data for Sep that calls for more dovish actions from the Fed. The preferred direct drop scenario for the pair has been invalidated and it pushed up towards the alternate target/resistance at 1.1000 ahead of today’s U.S NFP report.

On the flipside, a clearance with an hourly close above 1.1000 opens up scope for a further mean reversion/corrective rebound towards the next resistance at 1.1110.

GBP/USD – Recent rebound likely to be corrective, a new drop may materialise 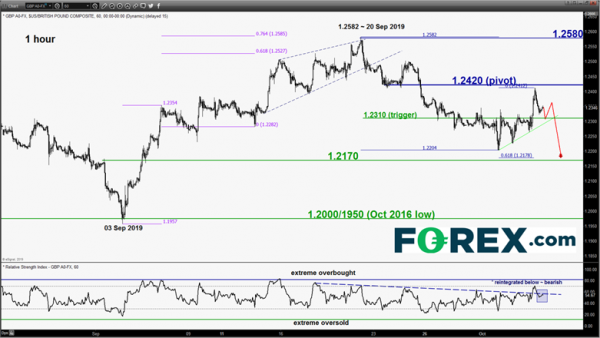 The pair has squeezed up above the 1.2345 short-term resistance towards 1.2420 (the alternate target as per highlighted in our previous report).

Right now, the on-going rebound from this week current low of 1.2203 to yesterday’s high of 1.2413 has almost retraced 50% of the prior decline from 20 Sep to 01 Oct 2019 low coupled with the hourly RSI oscillator that has indicated a failure “bullish breakout” from corresponding descending resistance in place since 18 Sep 2019.

These observations suggest the recent 213 pips rebound from 01 Oct 2019 low of 1.2203 is likely to be corrective in nature rather that start of an impulsive upleg sequence. Maintain the bearish bias with 1.2420 as the key short-term pivotal resistance for today and added 1.2310 as the downside trigger level to reinforce the bearish tone for another round of potential downleg to target the next support at 1.2170 in the first step.

However, a clearance with an hourly close above 1.2420 sees a squeeze up to retest the major resistance at 1.2580 (also the former ascending support from Oct 2016 low). 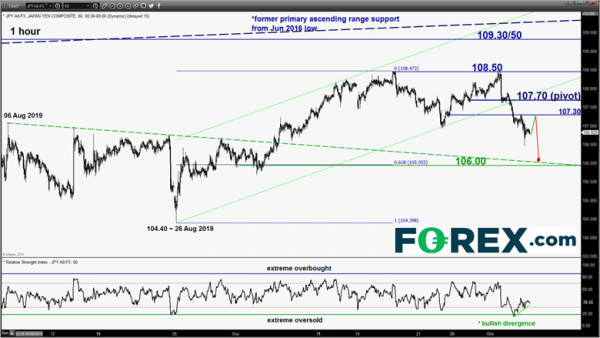 The pair has staged a bearish exit from the lower limit of the neutrality zone at 107.50 as per highlighted in our previous report, thus the bearish scenario has been validated.

Right now, the pair has staged a drop of around 200 pips from 01 Oct high area of 108.50 to yesterday low of 106.47 where the hourly RSI oscillator has shaped a bullish divergence signal after it hit at an extreme oversold level. These observations suggest the current decline is overstretched where the pair faces the risk of a corrective bounce at this juncture towards 107.30 with a maximum limit set at the 107.70 key short-term pivotal resistance before another potential downleg to target the next support at 106.00 (former range resistance from 06 Aug 2019 & the 61.8% Fibonacci retracement of the recent up move from 26 Aug low to 01 Oct 2019 high).

However, a clearance with an hourly close above 107.70 sees a squeeze up to retest the minor “Double Top” resistance of 108.50. 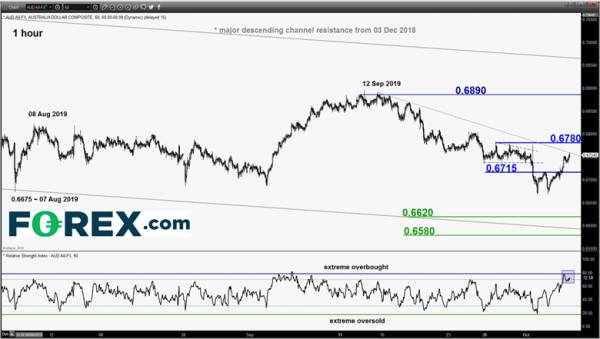 The pair has staged a squeeze up above the 0.6735 key short-term resistance and right now it is hovering right below the minor range resistance of 0.6780 that has managed to stall the recent “post RBA spiked up”.

Elements are mix at this juncture with a minor descending trendline from 12 Sep 2019 high acting as another resistance coupled with the hourly RSI oscillator that has just inched down from an extreme overbought level. Prefer to turn neutral first between 0.6780 and 0.6715. Only a break below 0.6715 revives the bearish tone for another potential downleg sequence to target the next support at 0.6620.