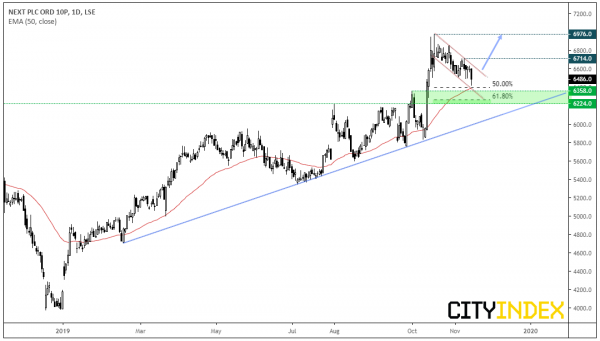 Next CFD/DFT (NXT): Since breaking above key resistance around 6,225, prices rallied to 7,000 and are now gently retracing within a tight, corrective channel. Moreover, the 50-day eMA and 50% retracement level are nearby to act as potential support. 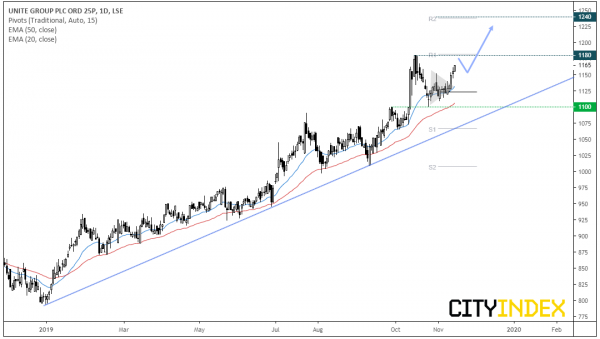 Unite Group CFD/DFT (UTG): The equity is locked in a strong uptrend, outperformed the FTSE and is on the cusp of outperforming its sector this year. After reaching 1180, it confirmed support at 1100, consolidated and is now eyeing up the 1180 highs once more. 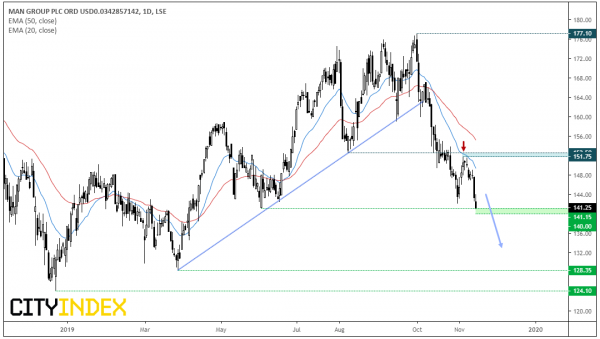 Man Group (EMG): Since the October peak, Man Group has shed just over 20% which places it within a technical bear market. The initial move towards 141 was relatively direct, only pausing slightly ahead of its break of the bullish trendline. Having retraced towards the 20-day eMA and stalling below 152.50 resistance, bearish momentum has returned and its on the cusp of breaking key support. 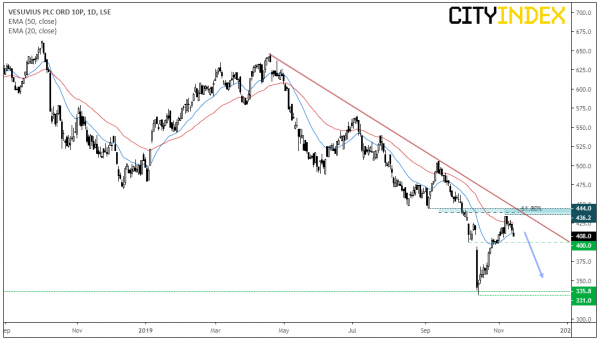 Vesuvius CFD/DFT (VSVS): Having pulled back to the 61.8% Fibonacci ratio, a swing high has formed and bearish momentum is returning. The peaks are timely and prices are accelerating away from the trendline, so we think the high is likely in. Ultimately, it appears to be an ideal candidate for bearish swing traders.

Avast CFD/DFT (AVA): Prices have only risen since breaking out of its bullish triangle. However, prices are now consolidating around 440 (right on the monthly R1 pivot) and extended from their averages, so we’d prefer to see a retracement or new level or support form before reconsidering potential longs.

Aveva Group plc CFD/DFT: The bullish trend remains strong and on our radar, having hit and broken through target. Yet just like Avast, its extended from its moving averages more than we’d like and lacks any sort of compression. So we’ll keep a loose eye on it and hopefully it will provide another entry point as we head towards Santa’s rally.

Greggs CFD/DFT: Key support held and it opted for the counter-bias by breaking back above the 200-day eMA and rallying higher. We may have seen a breakaway gap after completing a 3-wave correction around 720. If so, it should now head for and break to new highs. At time of writing, 2146 resistance stands in its way – we’re just waiting for prices to consolidate a little more before considering its potential for a breakout.