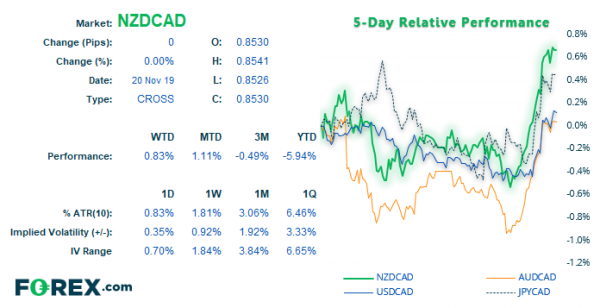 BOC’s Senior Deputy Governor Carolyn Wilkins delivered which appears to be laying the groundwork for a potential cut. Whilst she tips her hat to an economy which is “relatively well overall”, she pointed to regional differences and reiterated concerns over the “immense challenges” faced by the global economy.

On rates, whilst they “may be relatively low now” she added the bank “still has room to manoeuvre” and that “lowering rates could provide some insurance against downside to inflation”. Moreover, she added that the central bank has additional options in their tool kit such as “extraordinary forward guidance and large-scale asset purchases”.

With CPI data later today and Poloz due to speak tomorrow, we could see a further follow-through with CAD weakness should inflation disappoint and Poloz add his own dovish remarks. There’s also retail sales, GDP and PPI data ahead of their next meeting on the 4th of December. 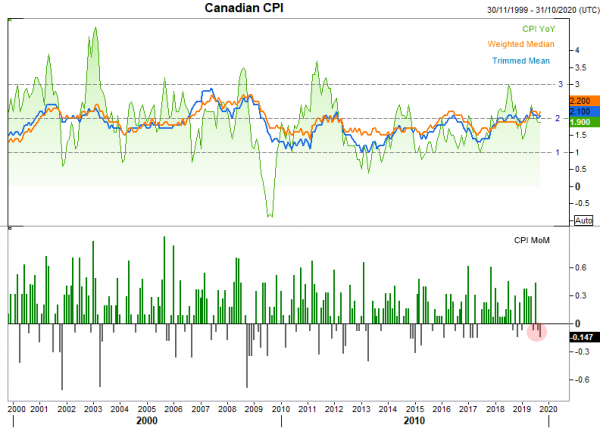 CPI: BOC year over year inflation data sits around the centre band of their 1-3% target, with standard CPI YoY at 1.9%, trimmed mean at 2.1% and weighted median at 2.2%. On a monthly basis however, CPI has contracted three times over the last four prints, with September’s read at -0.15% below a -1 standard deviations. Eventually these monthly figures will weigh on the slowly moving yearly reads, so another negative print would see a rise in expectations for BOC to cut in December or February. Furthermore, if oil prices are to weaken it could further weigh on the Canadian dollar and eventually inflation. 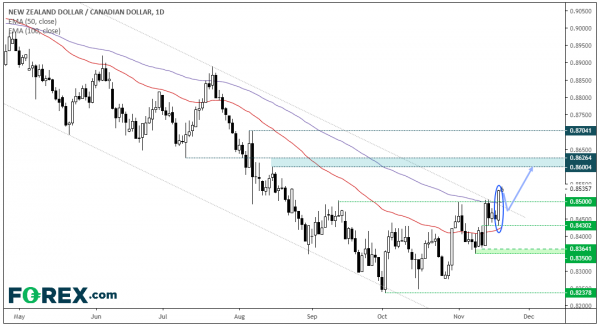 NZD/CAD was the biggest gainer of the US session, breaking key resistance at 0.8500 and closing above the March trendline to a 12-week high. Given that NZD traders remain heavily short, data is improving and TWI remains well below RBNZ’s own forecast, we continue to see upside potential for NZD crosses and CAD could be the ideal currency to pair it with, if BOC extend their dovish rhetoric and data weakens. 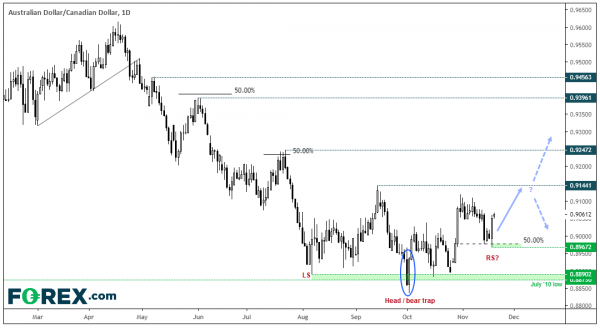 AUD/CAD also shows potential for a deeper correction, if not a reversal against its bearish trend. Declines slatted around the July 2010 low and a bullish piercing pattern confirmed a bear-trap with a false break of support. Having rebound to 0.9100, prices have pulled back and yesterday’s bullish engulfing candle raises the potential for a higher low to form. Moreover, it could be part of an inverted head and shoulders pattern.