It’s a mixed regarding USD performance overall, yet DXY points towards a near-term trough which could see a lower Euro and higher USD/JPY (at least over the near-term).

By Thursday’s close, DXY had produced is sixth consecutive bearish session. Typically, we tend to see a streak ‘snap’ around 3-4 days, so a higher run can assume the probability of the streak breaking also increases. Of course, it could just mean we see a single candle break the streak only to see a series of bearish candles reappear, but the fact that Friday produced a bullish engulfing candle on strong employment data just days ahead on an FOMC meeting suggests a cycle low could be in (regardless of whether it breaks to new highs or not). 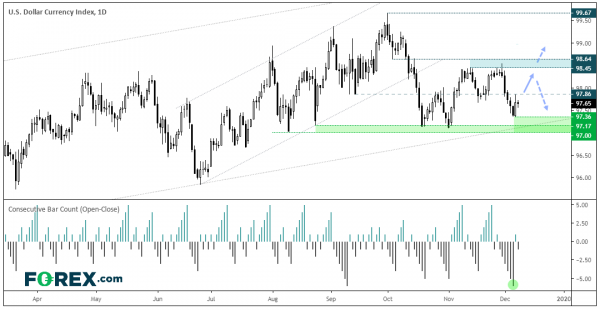 Whilst we remain bullish on USD over the near-term, we’re also mindful of the fact that December is typically bearish for the dollar, so we’ll also be on guard for USD to top out later this month and perhaps print new lows. 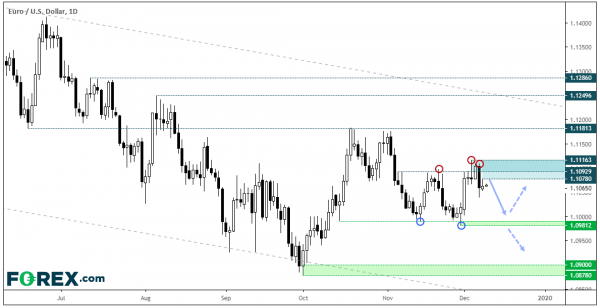 The path of least resistance for EUR/USD points lower. Yet it remains up for debate as to whether it can break to new lows, so the target is simply the lower bounds of the 1.10 – 1.11 range it remains entrapped in.

The bearish pinbar last Wednesday marked the top at 1.1116 ahead of Thursday’s bearish engulfing / outside day. Also take note that the 4-hour chart also has a bearish engulfing candle to mark a potential swing high at 1.1078. 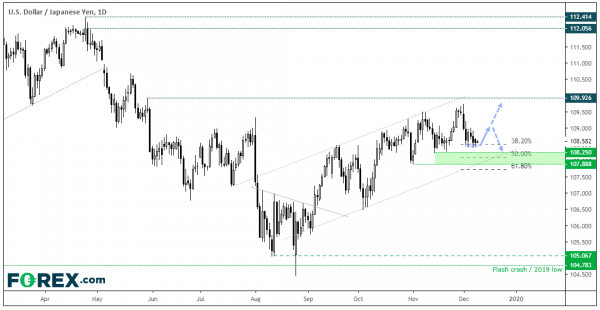 USD/JPY: The 20-day rolling correlation between DXY and USD/JPY is 0.56, so whilst not overwhelmingly strong it’s a positive correlation none the less. Yet from a technical standpoint DXY is showing signs that it may trough just after DXY; bearish momentum is waning and prices have failed to close below 108.50 for several sessions whilst producing lower wicks along the way. There’s also plenty in the way of technical support nearby including the Fibonacci levels, swing lows and the lower bullish trendline of the channel.

Part of the reason USD/JPY finds itself under pressure is because markets are concerned that tariffs will be implemented on China on the 15th December. But here are three reason’s to be on guard for a rebound next week