USD/NOK Correcting Ahead Of Inflation Data

When the Norges Bank met on December 19th, Governor Olsen said that “inflation is close to target” and that “the policy rate will most likely remain at the current level in the coming period”. The benchmark interest rate is at 1.5% and has been there since September 2019. Tomorrow these comments will be put to the test, as the Inflation Rate and the Core Inflation Rate are to be released. Expectations are for 1.6% (vs 1.6% last) and 2.0% (vs 2.1% last), respectively. The Norges Bank is due to meet again on January 23rd.

Norway is an oil exporting country. Therefore, as the price of crude oil moves higher, so does the Norwegian Krone. (Crude oil and the USD/NOK are inversely related). When OPEC agreed to cut output in mid-December, the price of crude began to slowly rise. As such, so did the value of Krone. And with inflation in check, according to the Norges Bank, USD/NOK began to sell off.

At the time, USD/NOK was trading sideways trying to navigate its way out of a rising wedge. As price began moving lower, it started retracing the rising wedge. The target for a rising wedge is 100% of the wedge. So far, USD/NOK has retraced to the 61.8% Fibonacci level of the wedge near 8.7900 and bounced slightly 2 days ago to the 200-day moving average and horizonal resistance near 8.9000. This allowed for the RSI to unwind a bit and move from oversold conditions back into the neutral range. However, today the USD/NOK put in a shooting star candlestick formation indicating prices may be ready to resume their move lower. 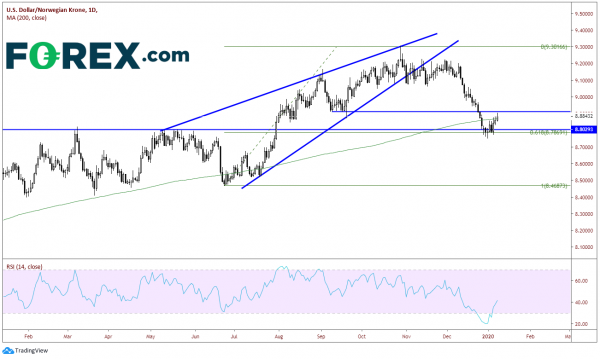 In addition to the shooting star on the daily, notice on the 60-minute chart how shallow the bounce was in USD/NOK compared to the selloff in crude futures. Since the bounce started, USD/NOK has moved from 8.7545 to 8.9034, an increase of only 1.7%. 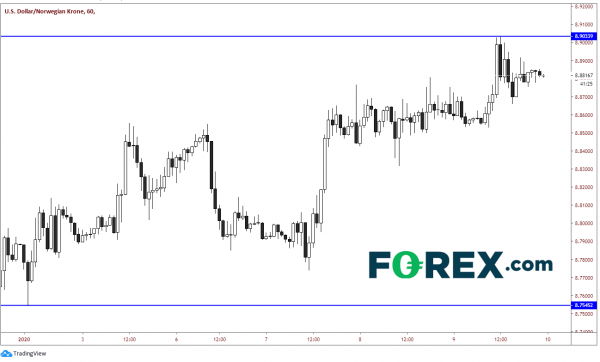 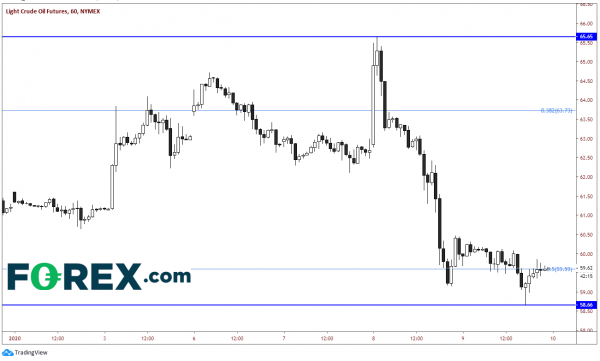 Therefore, if crude is to bounce and retrace some of the move lower, and the inflation data is stronger than expected, USD/NOK could resume its move lower…. and quickly!