If one is to look at a daily chart of the price of copper since mid-2018, its easy to see that the world economy has been fairly steady, albeit steady at a slow pace. Price has generally traded between roughly 2.50 and 3.00 over that time period, with the 200 Day Simple Moving Average around 2.70. 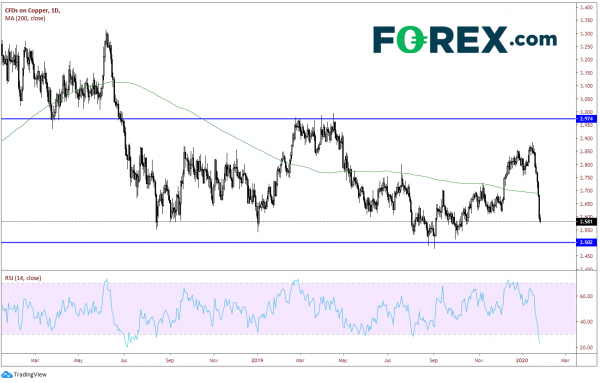 On a 240-minute chart over the last 2 months, we can see that copper had gone bid into the US-China trade agreement. Price traded from a low of near 2.42 on December 4th to a high of 2.88 on January 16th, a day after Phase One of the US-China Trade Deal was signed. However, on January 20th, as news began so spread of the new Coronavirus, copper began to trade lower. In the days to follow, as new cases began showing up around different cities in China, and then around the world, the decline in the price of copper began to accelerate. People feared (and still do) that the spread of the coronavirus will cause and economic slowdown in China and possibly elsewhere. Copper has given up all its pre-trade agreement gains, and then some (green line). Price and the RSI are currently diverging. 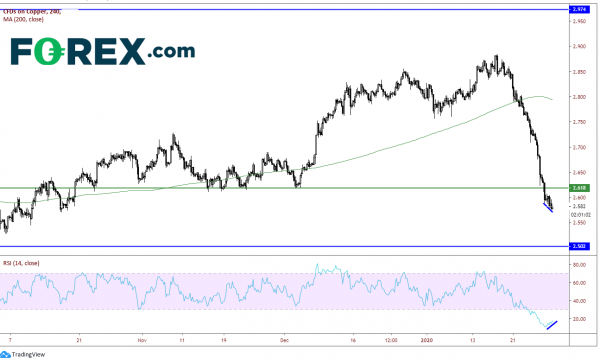 On a 60-minute timeframe, you can see that selloff from the time of the trade deal signing to current. Notice how strong the divergence is between RSI and price. 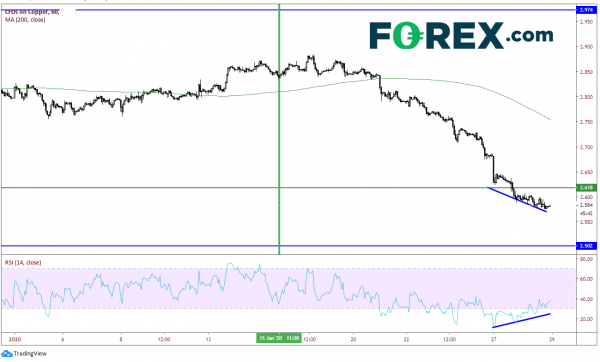 BE CAREFUL, when variables (coronavirus) are entered into price action, one cannot rely on technical alone. If the virus continues to spread copper may continue lower, especially is there are stops built up under 2.50!