Yikes!!! The GDP data out of Japan earlier during Asian hours was nothing short of awful. The Annualized Preliminary GDP Growth Rate for Q4 was -6.3% vs an expectation of -3.7% and 0.5% in Q3. Granted, Japan did introduce a new sales tax AND they had a devastating typhoon. However, those were already factored into the estimate of -3.7%!!!

But USD/JPY is immune to bad data from Japan, which has been fairly weak for the past couple decades (yes, decades). So, bad data is good data. Traders know that the government will be there to provide more stimulus if need be.

On another note, in addition to the bad GDP data concerns are growing about the Coronavirus in Japan. Japan is shutting down large public events to prevent any contagion that may occur, including emperor’s birthday celebrations and the Tokyo Marathon (except to elite runners). Could this eventually feed through to GDP as it is in China???

USD/JPY barely even flinched on the data. On a 30-minute chart, price traded in a tight range upon the release, moving over the next half hour between 109.82 down to 109.72 and back. 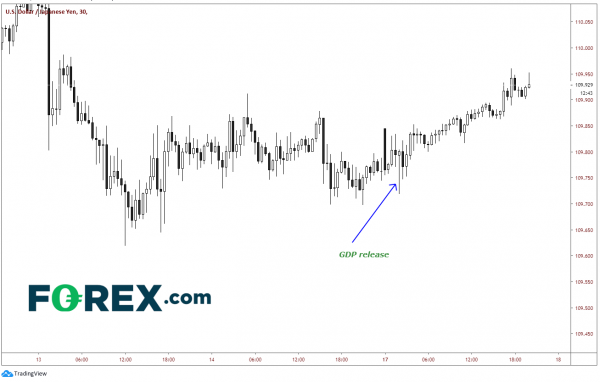 On a weekly timeframe, USD/JPY is trading within a symmetrical triangle, near the top of the downward sloping trendline. This trendline dates back to the first week of June 2015 and is just above the 200 Week Moving Average. If the pair closes above 110.30 on a weekly basis, it has immediate room to run to near 111.50. 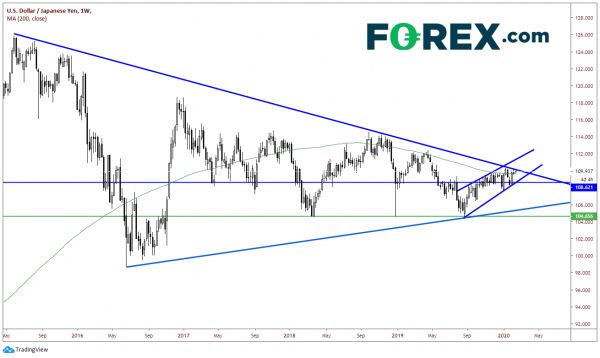 On a daily timeframe, we get a better look of how close USD/JPY is to the downward sloping long-term trendline, as well as previous highs at 110.30. There is strong support below at a confluence of supports near 108.30/50. Near this level is the upward sloping trendline from the August 23rd, 2019 lows, the 200 Day Moving Average and previous lows from February 3rd. 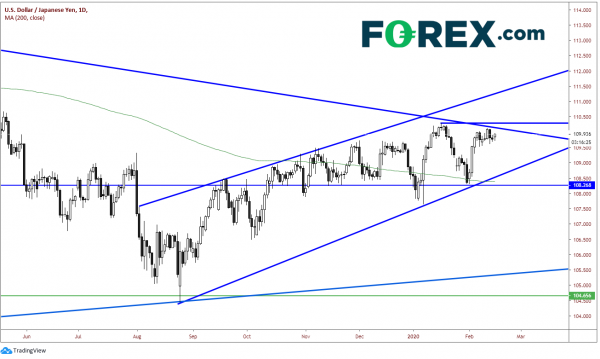 As USD/JPY approaches the apex of the long-term symmetrical triangle on the weekly chart, watch for a breakout above 110.30. There will likely need to be a catalyst to get the pair moving to the upside. However, one thing that seems unlikely to be the catalyst for a move is Japan’s economic data!