As news began to circulate through the markets earlier today that Japan’s Government Pension Investment Fund (GPIF) could possibly be reallocating funds out of Yen and into Euros and US Dollars, Emerging Market (EM) currencies began to sell off as well, in anticipation that they may be the next ones sold by the GPIF to raise capital. 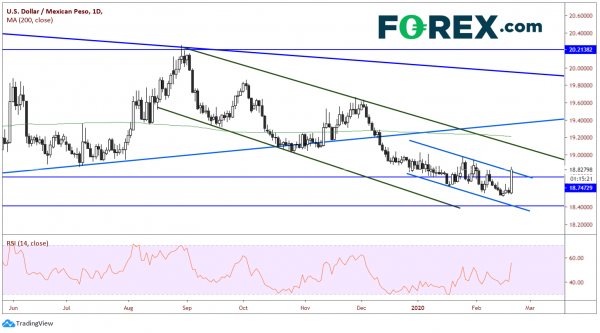 The next resistance level is the larger channel trendline near 19.1150. Horizontal resistance is just above that near 19.2000. Horizontal support comes in near the high on Tuesday at 18.6610. Below that is horizontal support near 18.5233, and then the bottom trendline of the smaller descending channel near 18.3650. Notice on the 240-minute timeframe that the RSI is overbought, so a short-term pullback is not out of the question. Bulls will look to buy dips near these levels as they anticipate a continued move higher. 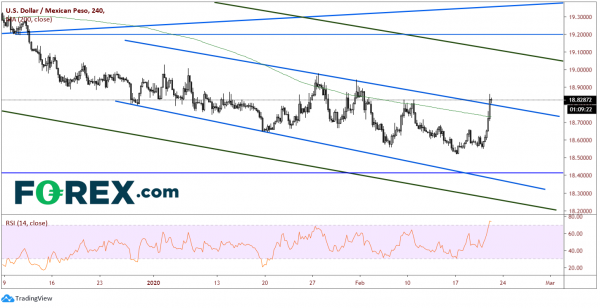 EUR/MXN is having similar price action today and the pair breaks out of a falling wedge on a 240-minute timeframe. The target for the breakout of a falling wedge is a 100% retracement of the wedge, which would target near 21.0000. There is resistance above at the 38.2% and the 50% Fibonacci retracements of the wedge at 20.4032 and 20.5160 respectively. Horizontal support (recent lows) and wedge trendline support near 20.0379. The RSI is not quite in overbought territory; however, bulls will again be looking for dips to buy near the breakout of the wedge. 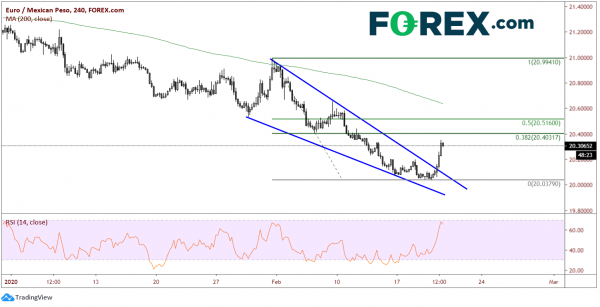 Emerging Market currencies, in general, need to be watched for the possibility of larger selloffs. Other EM currencies were bid today as well, for example USD/ZAR (up 1%). Could the US Dollar now be the safe haven currency because of the global slowdown and the spread of the coronavirus in Asia? Watch as the Global PMI’s are released throughout Friday for hints. This will be our first indicator of economic data for February and, therefore, our first look to see if manufacturing data was hit after coronavirus developments.