It should have been a relief today to find that the coronavirus pandemic which has dominated the headlines of the financial press since early March, had been relegated to side-line news. In its place, the top finance news stories today are mostly China-related, detailing a continued escalation in tensions surrounding the U.S. and China, a move by China to abandon its hard GDP target, as well as a plan by China to write a new national security law into Hong Kong.

The new security law, due to be presented today as a motion at the National People’s Congress (NPC) is aimed at outlawing activities that are perceived to undermine the central government as well as eliminating external interference in Hong Kong. In response to this prospect, stocks in Hong Kong have fallen almost 3% for the second day in a row.

Generally a rise in geopolitical tensions and sabre rattling as witnessed this week should be positive for gold, given its status as a safe haven. However, the price action following last week’s break above the $1747 high of April (in line with our call in early May here ) has been somewhat tepid.

“The rally from the March $1451 low appears to be missing a final leg higher above the April $1747 to complete a 5-wave rally.”

This raises the possibility that if gold has completed a 5-wave rally at this week’s $1765 high, it is on the verge of a significant corrective pullback. At the minimum the bearish divergence viewed on the RSI indicator on the daily chart warns that upside momentum is falling and a valid reason to tighten up stops on long gold positions.

More evidence that a pullback is looming is required. Should gold close this week much below $1735 it would leave a bearish weekly candle in place as well as bearish divergence via the RSI indicator on the weekly chart.

Presuming this occurs, a sustained break below support at $1710 would provide further confirmation that a medium-term high is in place and that a deeper pullback is underway into the $1550/1450 support region. 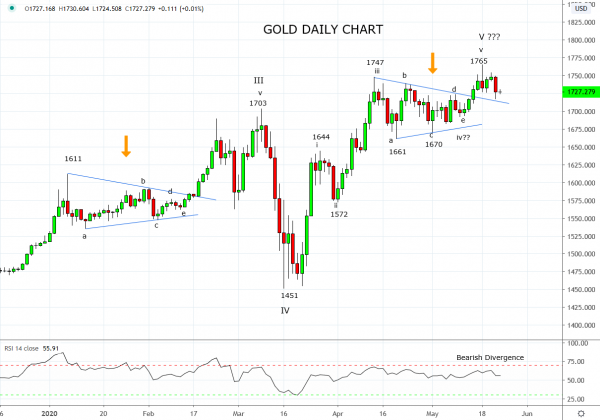