Yesterday, spot gold posted the largest daily decline since mid-April, diving 1.6% to $1,699, and confirmed our view that gold was losing steam. U.S. ADP jobs report showed a loss of 2.76 million private jobs in May, the reduction was much less than 9 million expected and 19.56 million in April.

ADP said “while the labor market is still reeling from the effects of the pandemic, job loss likely peaked in April, as many states have begun a phased reopening of businesses”. This is another sign, after a robust Caxin China Services PMI released yesterday, which suggest that major economies are getting back on track.

With Nasdaq heading closer to its record high, it appears that profit taking in gold continues and funds are flowing back to the stocks market.

Later today, latest U.S. initial jobless claims are expected to fall below 2 million, which would be down for 9th straight week. 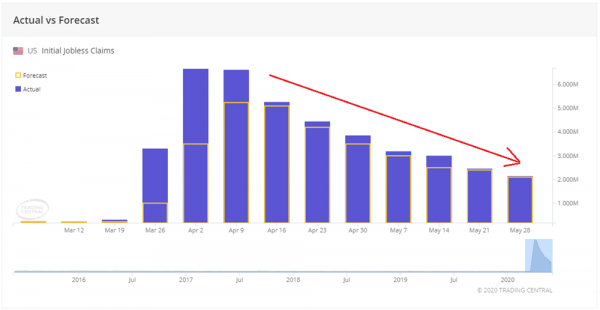 From a technical point of view, spot gold remains on the downside as shown on the 1-hour chart. Despite a modest rebound, the relative strength index shows no signs of a bullish reversal. The level at $1,713 might be considered as the nearest intraday resistance, and a break below the nearest support at $1,689 may open a path to the next support at $1,678. Alternatively, breaking above $1,713 could trigger a further rebound to test the next resistance at $1,726.