Overnight, the British pound advanced 0.6% to $1.2477. The Cable has been boosted by upbeat comments by central bank officials.

Earlier this week, Bank of England Chief Economist Andy Haldane pointed out that the recovery in Britain looks V-shaped.

Yesterday, Jonathan Haskel, a BOE monetary policy committee member, said the second quarter as a whole will not be quite as negative as expected.

Meanwhile, such optimism on economic recovery has been quenched a bit by Gita Gopinath, chief economist of the International Monetary Fund (IMF). In a discussion with the House of Commons Treasury Committee, she suggested: “I think we could end up with something much more flat. (…) It’s a little too early at this point to project what the rest of that path would look like.”

On an Intraday 30-minute Chart, GBP/USD has confirmed a Bullish Pattern of Higher Highs. 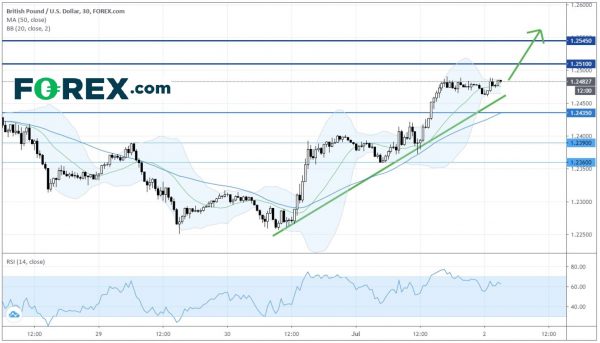 GBP/USD keeps trading at levels around the ascending 20-period moving average, which stands above the 50-period one

The trailing key support has been raised to 1.2435 (the 50-period moving average).

There Is A Variety Of Trends On Currency Majors. Investors Expect Data On The Labor Market