The US Dollar was bearish against all of its major pairs on Tuesday. On the US economic data front, Durable Goods Orders jumped 1.9% on month in the September preliminary reading (+0.5% expected), compared to a revised +0.4% in the August final reading. Finally, the Conference Board’s Consumer Confidence Index unexpectedly declined to 100.9 on month in October (102.0 expected), from a revised 101.3 in September.

On Wednesday, the Mortgage Bankers Association’s Mortgage Applications data for the week ending October 23rd is expected. Finally, Wholesale Inventories for the September preliminary reading is expected to rise 0.4% on month, in line with the August final reading.

The Euro was bearish against all of its major pairs. In Europe, the European Central Bank has reported September M3 money supply at +10.4% (vs +9.6% on year expected). In France, September PPI was released at +0.2% on month, vs +0.1% in August.

The Australian dollar was bearish against most of its major pairs with the exception of the CHF, EUR and USD.

The NZD/USD was one of today’s largest movers among the majors with a gain of $35 pips. Looking at a daily chart of the NZD/USD, price action appears to breaking above a diamond continuation pattern. The preference is for A continuation of the uptrend that started back in March at the pandemic lows. A break above 0.6795 resistance would be a strong bullish signal. However, a break below 0.6485 support would be a bearish signal with a decline to the next major support level likely at 0.638. 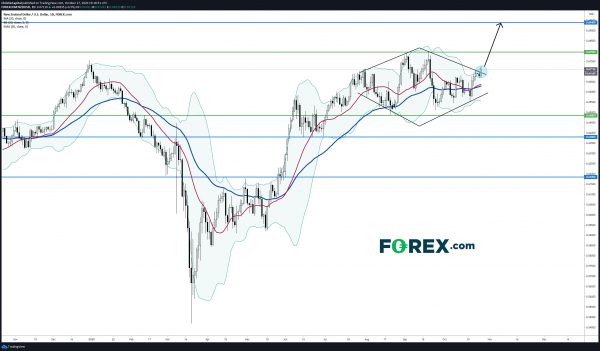