Stock markets are skyrocketing again today. The S&P 500 is approaching all-time highs as up over 175 handles off Sunday night Globex open. The index held the 200 Day Moving Average and long-term support from January 2018, and quickly began moving higher. S&Ps are currently back at trendline resistance from the prior ascending wedge and the 161.8% Fibonacci extension from the September 1st highs to the September 24th lows, near 3836.75. There are also recent highs from Jan 20-27th which could not push past that zone. Three trendlines converge above near 3875, which would be an all time high . The DJIT is also up 2% and the NDQ 100 is up 1.5%. The part that is concerning about the move is that some of the traditional correlations, such as with currencies and copper, are not holding. What’s going on? 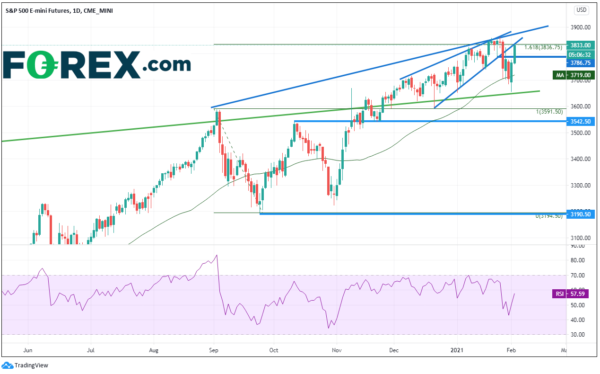 Yesterday we wrote about 1.2050 was a key level to watch in EUR/USD. With stocks moving higher, one may have expected that level to hold. However, the 240-minute chart shows that once that level was broken, the move lower continued. 1.2011 is the next support level, just in front of 1.2000. Resistance is now at the 1.2050 level! With EUR/USD moving lower, why are stocks higher? 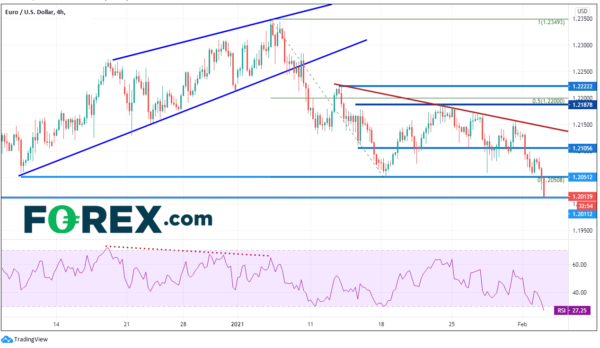 The RBA earlier was dovish, and they said they expect to continue to increase their buying program of 100 million AUD per month past the current expiration date in March. It makes sense that the AUD/USD would be moving lower. Yesterday, the pair broke lower below the downward sloping channel on the 240-minute timeframe, and today, the continued to move lower through the 61.8% Fibonacci retracement of the December 21st, 2020 lows to the January 6th highs, near 0.7600. Horizontal support is at 0.7557. With a lower Aussie, one may expect stocks to be lower as well.

China reported worse than expected Manufacturing and Non-Manufacturing data over the weekend. Traders may have concern on demand for copper, and therefore, one would expect a lower price. After reached 3.7328 on January 6th, which an extremely divergent RSI, one may expect prices to pull back a bit. The price of copper pulled back to the 200 Day Moving average near 3.5482. However, today copper is threatening to close below the key moving average, as well as, take out support at 3.4873. Copper is down 0.5% today. Yet why would stocks be higher? 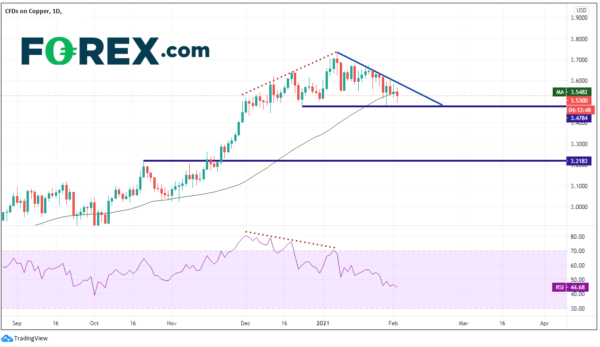 How sustainable is this move in stock indices? Could this just be a move back to levels prior to the short squeeze scare? (GME and SLV are getting crushed today) Or is this possibly just a move to buy stocks ahead of “potential” good earnings from AMZN and GOOG? Maybe! (Remember TSLA was a huge miss last week.) Is it because of the $1,9 trillion stimulus Joe Biden offered weeks ago? Or is it just continued “money that needs to be put to work at the beginning of the month”. It could be any or all these reasons. However, one could expect that something has to give. Either stocks should begin to move lower or EUR/USD, AUD/USD and Copper should begin to move higher.