Nope, it’s not a short squeeze this time! Silver is moving higher today, up nearly 3.25%, along with other commodities, including Gold which is up 1.3% as well. Commodities, inflation and inflation expectations have been moving higher, and it seems the precious metals were the last to join the party. However, as discussed in the Week Ahead, US Fed Chairman Powell will give his semi-annual testimony on Monetary Policy to the Senate Banking Committee. Powell has been extremely dovish over the past few weeks, even as commodities, yields, and inflation expectation have been ticking high. However, Silver and Gold have not been participating in the move, until today.

Silver (XAG/USD) has been in a symmetrical triangle since early August 2020. However, on February 1st, as rumors began to make the rounds that the precious metal was the next target for a short squeeze from a well know retail chat forum, traders tried to jump in front of them and pushed price above the triangle. Silver traded from 26.99 up to 30.08, only to have price give up 100% + of those gains the next day. Price pulled back into the triangle. Silver held the 61.8% Fibonacci retracement level from the January 18th lows to the February 1st highs near 26.40. Today, price again broke out of the top of the downward sloping trendline of the triangle! 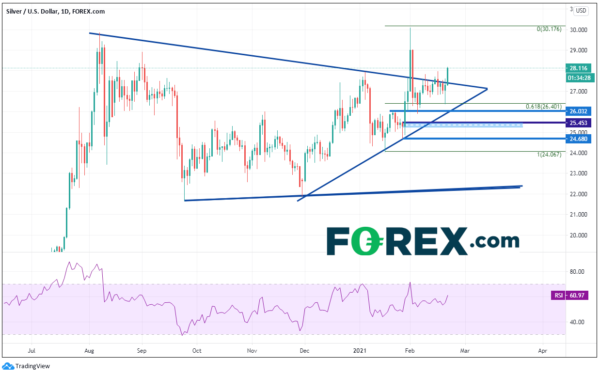 As price traded out of the triangle today, it halted at a horizontal resistance zone between the 50% and the 61.8% Fibonacci retracement level from the highs on February 1st to the lows on February 4th, between 28 and 28.50. The RSI is also in overbought territory, so a pullback is not out of the question. 28.00 acts as first support. Bulls may wait for a further pullback top 27.69 to enter the market, which is the over night highs. Below there, trendline line support crosses near 26.50 (which is also near the lows of February 18th). First resistance is at the 28.50 level, then the February 7th highs at 30.08. If price breaks above there, the 127.2& Fibonacci extension from the previously mentioned timeframe is 31.25. 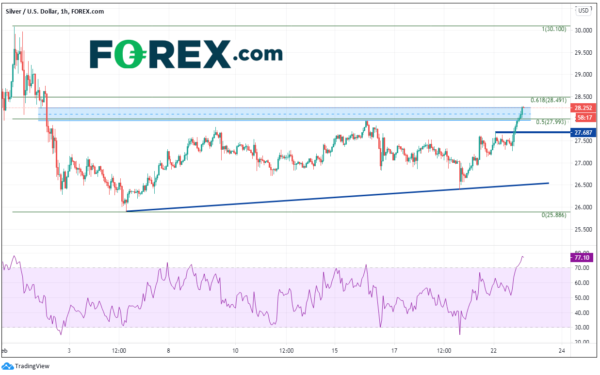 If commodities continue to trade higher, Silver should continue moving with the complex. However, the direction of commodities (and the US Dollar) may lay in responses of Fed Chairman Powell’s testimony on Tuesday.