If You Can’t Trade Bitcoin, Look To USD/RUB!

Bitcoin has had a ton of volatility lately. There are any number of reasons that the cryptocurrency could have been selling off lately:

The reason doesn’t really matter. All we know is that Bitcoin has moved lower, and based on technical analysis, it appears that it may be heading lower. 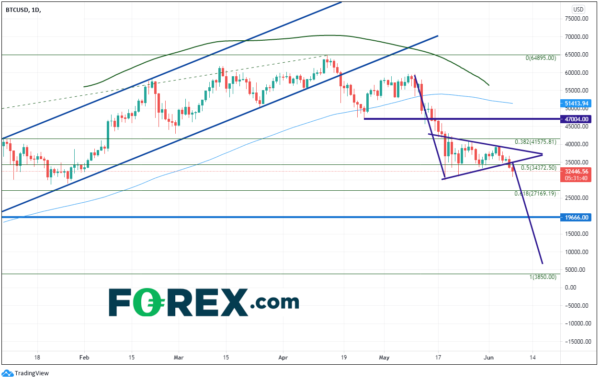 After putting in a rounding top formation through the first 4 months of 2021, Bitcoin began to move lower and toward the latter half of May. Price then began consolidating in a pennant formation near the 50% retracement level from the March 2020 lows to the highs on April 14th between 35,000 and 40,000. On June 7th, Bitcoin broke below the bottom, upward sloping trendline of the pennant. The target for a pennant is the length of the pennant “pole”, added to the breakdown point from the pennant. In this case the target is near 6,700. However, if price does move to target, it must first break through the May 19th lows of 30,066, the 61.8% Fibonacci retracement level of the previously mentioned timeframe, near 27,169, and the long-term former resistance level (now a support level) at 19,666.

USD/RUB has been trading sideways in a symmetrical triangle since the beginning of the pandemic in March 2020. After a brief false breakdown below the bottom trendline of the triangle in mid-March of this year, price bounced to the 61.8% Fibonacci retracement level from the November 2nd, 2020 highs to the March 2021 lows near 77.75 and formed a head and shoulders pattern. In early May, USD/RUB broke below both the neckline of the shorter-term head and shoulders, the bottom upward sloping trendline of the longer-term symmetrical triangle, and the 200 Day Moving Average, between 74.80/75.35. On June 8th, price took out the March 16th lows near 72.53 and appears to be on its way to the head and shoulders target of 71.50. Below there is horizontal support from June 2020 near 70.55. 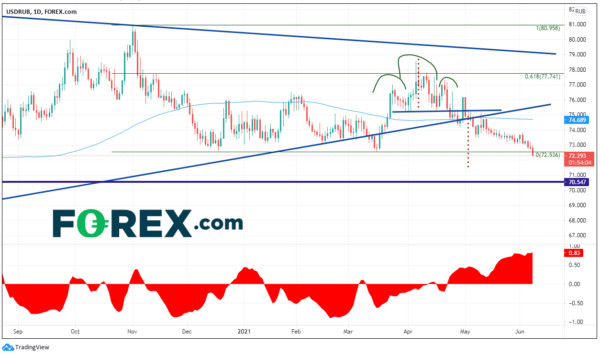 Notice that on the 240-minute timeframe below that the correlation is currently +0.85, stronger than on the daily timeframe. Therefore, it can be traded on this shorter timeframe as well. However, also notice that the RSI on the 240-minute USD/RUB chart is extremely oversold, near 21. Price may be due for a bounce towards the bottom trendline of the wedge above near 72.67, which acts as first level of resistance. There is also horizontal resistance just above at 72.75. Above there, resistance is at the top, downward sloping trendline of the wedge near 73.40. 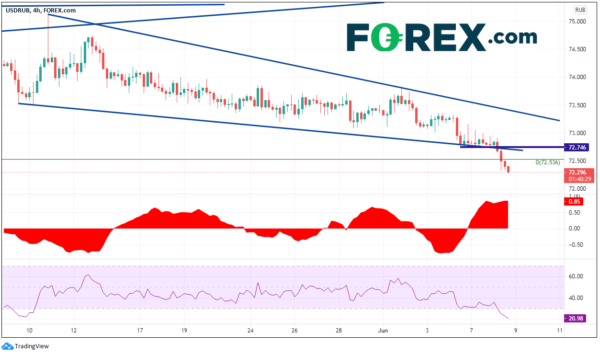 Note that the correlation coefficient won’t tell you the magnitude of the move, only how strongly related the direction is between the 2 variables. Also, correlations change over time and across different timeframes, so make sure to pay attention to see if it is changing!