The previous high was made on September 24th, as the CBRT unexpectedly cut rates to 18% from 19%. The Central Bank said that rising inflation was transitory, due to supply constraints and an increase in demand. Indeed, just over a week later, September inflation was 19.58% YoY vs 19.7% expected and 19.25% in August. The Central Bank of Turkey meets again on October 21st and despite the rise in inflation, expectations are swirling that the CBRT may cut again.

USD/TRY traded to its highest level ever today on fears that the country was on the brink of war. The pair traded above the psychological round number resistance of 9.000 to a high of 9.01751. Notice that there is a high positive correlation between US 10-year yields and the price of USD/TRY, as there is with many emerging market currencies vs the US dollar. The current correlation coefficient between US 10-year yields and USD/TRY is +0.92. A reading above +0.80 or below -0.80 is considered a strong correlation. Therefore, if US 10-years continue to rise, there is a good chance that USD/TRY will follow. Also notice that the RSI is in overbought territory, an indication the pair may be ready for a pullback. 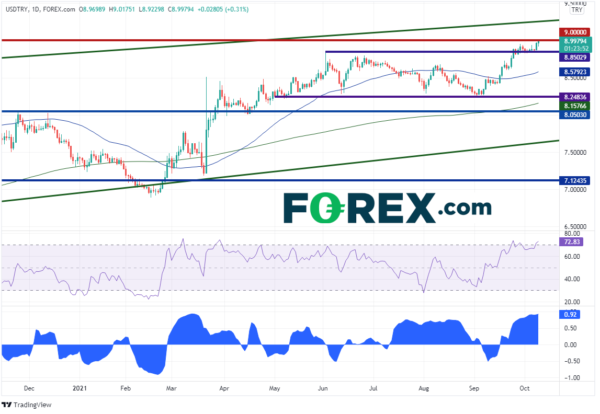 On a 240-minute chart, price has run into resistance at the top trendline of an ascending wedge. Resistance is at the daily highs of at 9.01751, which confluences with the 127.2% Fibonacci extension from the June 1st highs to the Septembe4 22nd lows. Above there is the 161.8% Fibonacci extension from the same timeframe. If price hold the 9.0000 level, horizontal support is at 8.97486, then long-term horizontal support and the bottom upward sloping trendline of the ascending wedge near 8.85029. Below there, is the September 20th highs at 8.7275. 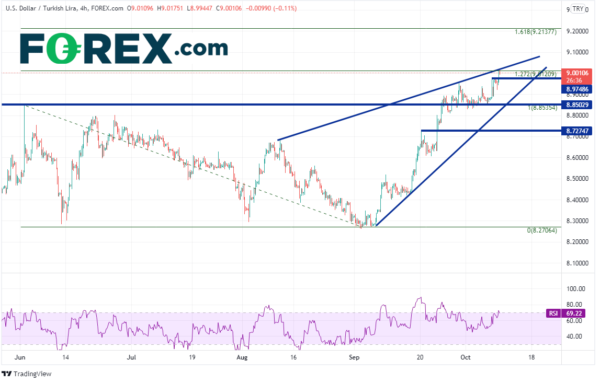