EUR/USD continues to make lower lows and lower highs. And that, by definition, is a downtrend. However, it may not have as much to do with the Euro, and it has to do with the US Dollar. The US Dollar Index broke out of a short-term symmetrical triangle near 94.40 and is desperately trying to push above a long term trendline (red) dating back to 2011. Price halted at the trendline, hear 94.56 as it moves towards the September 24th, 2020 highs of 94.76. 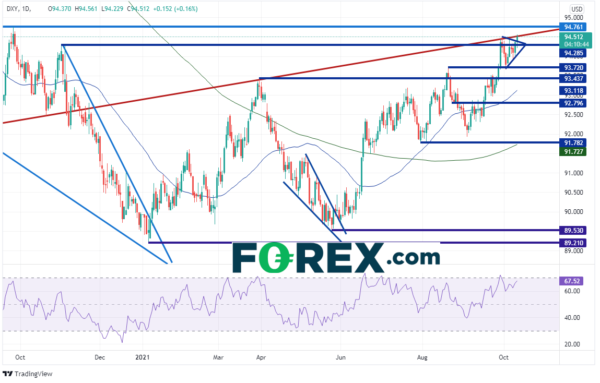 EUR/USD makes up 57% of the US Dollar Index (DXY), so it’s no surprise that as the DXY pushes towards new highs, that EUR/USD is moving in a similar, but opposite, direction. Today, the pair reached a low of 1.1524 thus far, its lowest level since July 21st, 2020. Price formed a double top near 1.1905 back in August and September, and finally broke lower on September 29th. The target for the double top is near 1.1400, however price must first pass through strong support between 1.1490 and 1.1515, which is: 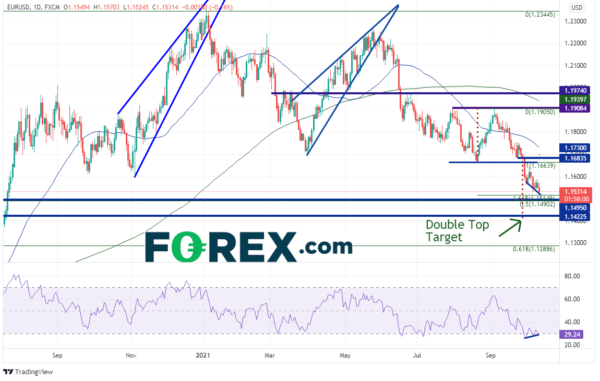 On a 240-minute timeframe, the downtrend is much more noticeable within the channel. In addition to the support mentioned above as price moves towards the double top target, there is also currently support at the bottom trendline of the downward sloping channel near 1.1460. Resistance is above at the top downward sloping trendline near today’s highs of 1.1570. If price breaks above, there is resistance at the neckline of the double top near 1.1665 and then the 50-Day Moving Average (see daily) near 1.1730. 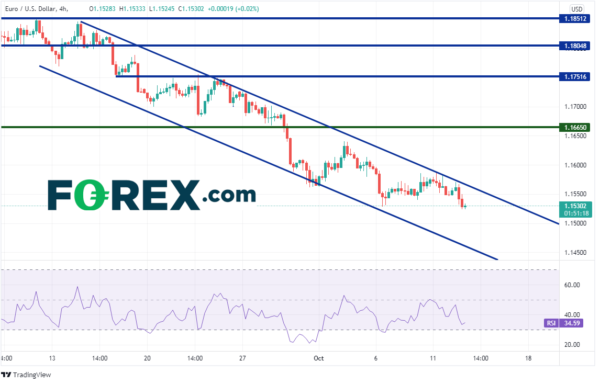