Perhaps for those used to trading the latest NFT or meme stock, the chart of USD/TRY may not look to unusual…but for FX traders, the ongoing collapse in the currency of a country in the top 20 of GDP is a truly astounding development.

Last week, my colleague Joe Perry identified the pair’s fresh record high on the back of geopolitical tensions and surging inflation, but the catalyst for the latest swoon in the lira is even more alarming. In a late-night decree on Thursday, Turkey’s President Recep Tayyip Erdogan dismissed several more of the central bank’s deputy governors, including the only one who opposed last month’s surprising interest rate cut.

In other words, traders’ fears that the nominally independent central bank is becoming hopelessly politicized are being realized, causing a widespread loss of confidence in the lira. According to central bank data, foreign investors held just $6B in government bonds at the halfway point of the year, down more than 90% from the $61.5B in Turkish bonds that foreign investors held as recently as 2013.

Turning our attention to the chart, USD/TRY is working on its seventh consecutive daily gain after blasting through the 9.00 level last week. With prices at a fresh record high, there are no levels of previous resistance nearby, though the 161.8% Fibonacci extension of the 3-month pullback that started this time last year looms up near 9.60 as a logical next target for bulls. Beyond that, the psychologically-significant 10.00 level may come into play next. 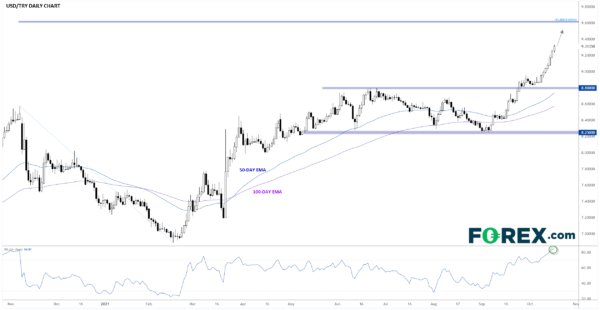