The European Central Bank (ECB) meets on Thursday and is expected to leave rates and monetary policy unchanged. The ECB would like to wait until the December meeting when new growth and inflation forecasts will be released. However, don’t write off his meeting as it may provide clues as to what the ECB may do once their bond buying program expires in Mach 2022.

There is talk that the ECB may either create a new program or makes changes to its legacy bond purchase program. Under the current bond buying program, the ECB purchases a fixed amount of bonds based on the size of a country’s economy. Some may be looking to change this based on the needs of a particular country. In addition, the EU will also release its GDP Flash estimate for Q3 and the CPI fast for October. The headline CPI YoY print is expected to be 3.7% vs 3.4% in September. Watch for wording as to how the if the ECB will try and control inflation. How much of it is still transitory?

The Bank of Canada (BOC) also meets this week, on Wednesday. With better than expected employment data and higher inflation since the last meeting, the BOC is likely to act. The central bank is expected to taper bond purchases from $C2 billion per week to $C1 billion per week. In addition, as with the ECB, watch for language and guidance regarding interest rates. Will the BOC be forced to hike rates sooner than later? Markets are currently pricing in a rate hike by April 2022 and nearly 100bps over the next year! With headline inflation running at 4.4% YoY in September, the BOC will be need to decide if the inflation is still transitory or if persistent inflation will run last longer than expected.

Since September 21st, EUR/CAD had been trading in an orderly downward sloping channel from a September 20th high of 1.5098 down to the October 15th low of 1.4319, a move of nearly 780 pips in under a month. Since then, the pair has been trading sideways as the RSI unwinds back into neutral territory. However, notice on the bottom of the chart that the correlation coefficient between EUR/CAD and the front month WTI Crude future contract is -0.93. A reading below -0.80 is considered a strong negative correlation. Therefore, if Crude Oil continues to move higher, there is strong chance that EUR/CAD will resume its trend lower. 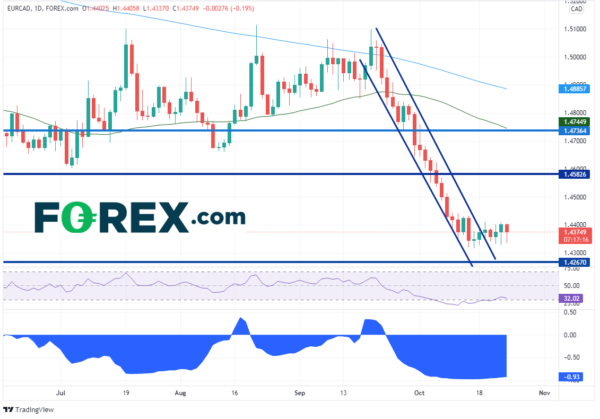 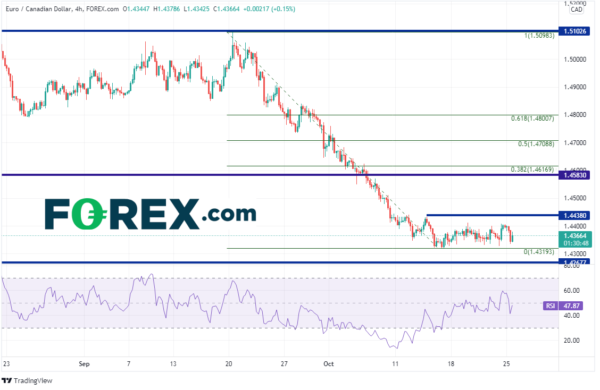 With both the BOC and the ECB meetings this week, large catalysts loom for EUR/CAD to break out of its recent range. Throw in the pair’s correlation with Crude oil, and there is potential for volatility in the EUR/CAD!