USD/NOK Getting Knocked Around

There are many variables in play this week which already have USD/NOK up 1.5% this week. Let’s look at a few of them and see what else there is to watch this week that can move USD/NOK:

Norgesbank:The Norgesbank meets on Thursday.After hiking rates at their September meeting by 25bps, Norway’s central bank said they will not raise rates again until the December meeting, for which a 25bps hike is already priced in.However, watch for hints that they may increase the pace of their rate hikes due to higher oil prices and supply chain issues (inflation).

OPEC+:Member’s of the oil cartel, plus other distinguished guests, meet to discuss whether they should increase the output of oil.At their last meeting in October, members decided to keep output unchanged at an increase of 400,000 bpd.However, with WTI prices hovering near $84, member nations may wish to increase output in order to lower prices (at the request of a few nations).

Technicals: On a daily timeframe, USD/NOK recently reached its targets for both a double top formation and an AB=CD pattern, near 8.2800.The pair bottomed on October 21st at 8.2786 and bounced.Since then, the pair has moved to 8.5308, which includes a 1.5% move higher today. The pair also created a bullish engulfing candlestick pattern.USD/NOK halted just below the 200 Day Moving average at 8.5384.There is a confluence of resistance just above the key moving average, which includes the 50% retracement from the September 30th highs to the October 20th lows, horizontal resistance, and the 50 Day Moving Average, all between 8.5548 and 8.5705.If the resistance holds, intra-day support is at Monday’s highs of 8.4718 and then todays low of 8.3943. 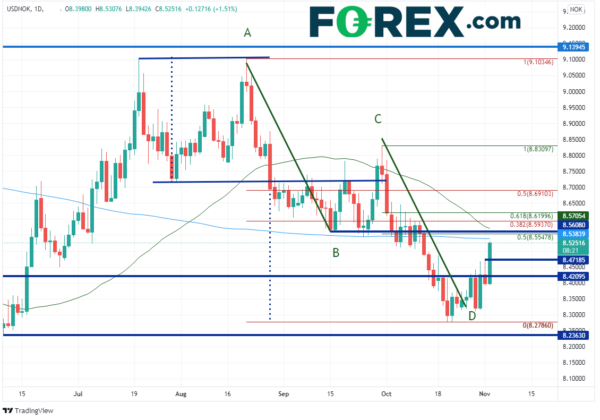