The momentum indicators are pointing to a neutral bias in the short term with the RSI holding near the 50 level and the MACD oscillator is moving sideways around the zero level. Also, the price is holding within the 20- and 40-day simple moving averages (SMAs) and the red Tenkan-sen and the blue Kijun-sen lines, all suggesting a weak movement.

In the event of an upside reversal, the 1.3000 round number could act as strong barrier before being able to re-challenge the 1.3080 resistance. A break above this level would shift the short-term outlook to slightly bullish and could lead to a push around the eight-and-a-half-month high of 1.3487.

In brief, in the bigger picture, GBPUSD has been in a bullish tendency since March 20, and a jump above 1.3487 could shift the short-term bias to positive. 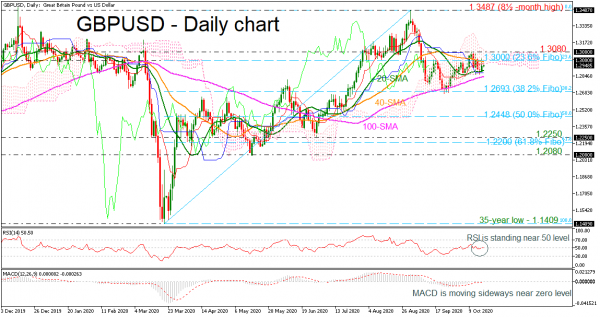