The Canadian dollar continues to show limited movement. Currently, the pair is trading at 1.3053, down 0.15% on the day. There are no US economic releases on the schedule.

Canada ended the trading week in style, as retail sales for September were much stronger than expected. Headline retail sales jumped 1.1%, up from 0.4% beforehand. Core retail sales also impressed, climbing from 0.5% to 1.0%. Analysts had projected much weaker figures, with forecasts of 0.2% for the headline figure and 0.0% for core retail sales. Despite the strong numbers, the Canadian dollar has only managed small gains on Friday.

Will consumers continue to keep the purse strings open? The Covid-19 pandemic has caused tremendous economic damage, and there are serious concerns that a resurgence of Covid could have a severe impact on the normally robust Christmas shopping season. With the Canadian economy taking tenuous steps in recovery, a disappointing Christmas could spell trouble for the economy and the Canadian dollar.

The Canada ADP Nonfarm Employment Change report continues to show declines in job creation. The October reading came in at -79.5 thousand, marking a third straight decline. Still, this was considerably better than the September release of -240.8 thousand. The ADP releases, which are derived from actual ADP payroll data, have been much weaker than the official employment releases. Employment Change for October showed a gain of 83.6 thousand, which was down from 378.2 thousand, but still higher than expectations. We’ll get a clearer picture of the strength of the labor market in the first week of December, with the release of Employment Change. 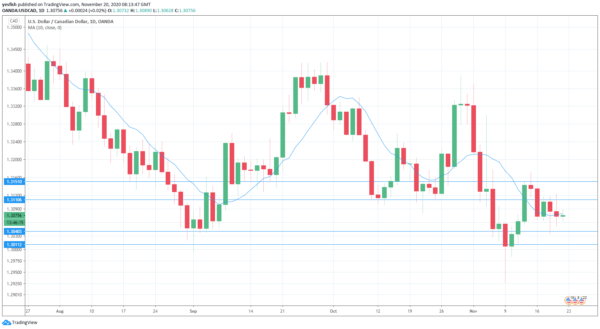