There is not much on the agenda next week, but that doesn’t mean things will be quiet as the battle between longer-term vaccine hopes and the present lockdown reality continues to rage. The highlight on the economic calendar will be the latest PMIs, especially from the Eurozone, which will reveal how much damage the latest lockdowns have inflicted. In America, the latest Fed minutes might be viewed as outdated, so it will be all about infection numbers as more states tighten their restrictions. Finally, a Brexit deal could be imminent.

The latest vaccine news sparked a wave of euphoria in global markets, but the enthusiasm didn’t last long as surging infections and fading prospects of powerful fiscal stimulus kept the animal spirits on a leash. Investors are now trying to balance the brighter outlook for next year against the covid reality right now, with most of Europe in partial lockdown and America quickly moving in that direction.

The debate is whether all the ‘good news’ has been priced in at this point, leaving markets vulnerable to any negative headlines. Admittedly, much of the price action over the coming weeks will hinge on 1) whether the virus continues to spread uncontrollably in the US and 2) whether the Fed signals it will pull the QE trigger again in December.

What’s striking is that while the stock market and commodities like crude oil were highly responsive to the vaccine news, the FX market barely reacted. Euro/dollar even moved lower afterwards, which is not what you would expect considering the greenback has been acting like a safe haven overall. This suggests markets saw the news as decreasing the likelihood of the Fed acting again with force, whereas the ECB has already pre-committed to another liquidity injection next month. 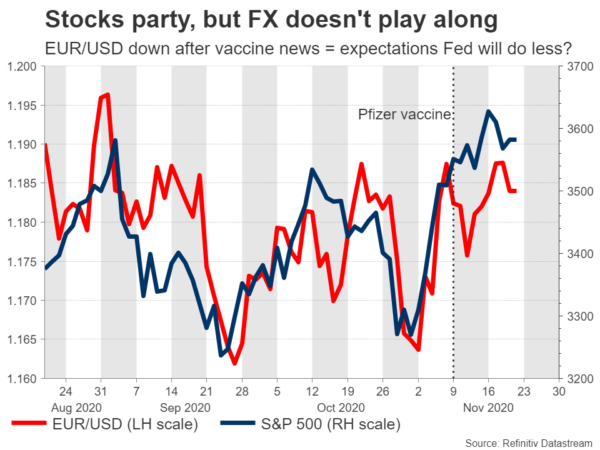 That said, Fed officials might not have much of a choice. Tightening restrictions across the US will inevitably hit growth even without a national shutdown, and Congress is unlikely to deliver substantial fiscal relief anytime soon. Plus, the Treasury is now trying to withdraw some of the emergency loan programmes that were available for small businesses, adding more pressure on the Fed to expand its own liquidity offerings.

The bottom line is that if markets sense more Fed easing is on the menu, that would argue for some upside in euro/dollar. Pointing in the same direction is a potential Brexit deal being wrapped up soon, which could boost both the pound and the euro at the dollar’s expense.

But even bearing this in mind, it is difficult to envision euro/dollar breaking above $1.20 as this region has been a line in the sand for the ECB lately. Hence, while the near-term risks around the dollar seem tilted lower, the downside looks relatively limited as well. The joker in all this is what happens with the upcoming European PMIs.

The week will kick off with a blast as the Eurozone’s preliminary PMIs for November will hit the markets early on Monday. These will be the first numbers to reflect the new lockdowns, so things could get ugly. All the indices are projected to plunge, with France expected to bear the brunt of the pain as that’s where the lockdowns are stricter. 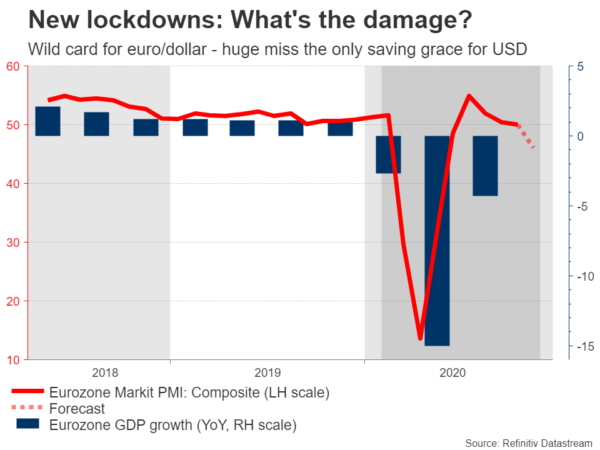 The question now is whether the actual numbers will be even worse than the forecasts. Admittedly, Europe has been in a lockdown for several weeks now, so most of the bad news should be priced in at this stage. Plus, the forecasts are extremely grim already, so a massive disappointment does not seem very likely.

Still, this data set is the wild card for euro/dollar. A major disappointment could be the saving grace for the dollar that pushes euro/dollar lower, otherwise a combination of Fed easing and a Brexit breakthrough could push the pair towards $1.20 again.

The Brexit saga may be about to enter its final act, with both sides suggesting a deal is imminent. Of course, this is Brexit we are talking about, so nothing is certain until a deal is signed. The latest updates suggest 95% of the treaty has been completed, though gaps remain on the classic issues: competition rules, fisheries, and the policing of the deal.

It seems the negotiators have done all they can by themselves, and it is now up to the politicians to make the final compromises. Specifically, the EU expects the UK to compromise on competition rules before it concedes itself on fisheries. In other words, the ball is now in Boris Johnson’s court – if he wants the deal, he has to soften his stance. 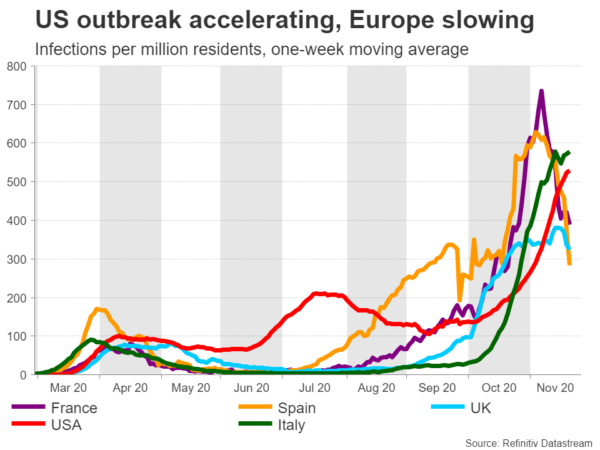 As for the pound, it has moved substantially higher lately in anticipation of an agreement deal, and if one is reached soon, it may have some more miles left in the tank. Speculative positioning on the pound is still near neutral levels according to the weekly CFTC data, which leaves plenty of upside once the Brexit smoke clears. That said, if we enter December and a deal hasn’t been reached yet, the optimism could evaporate very quickly.

The nation’s PMIs for November are also out Monday.

In the US, the main release will be the minutes of the latest FOMC meeting on Wednesday, though any policy signals might already be seen as ‘old news’ by the markets. The Fed may have been unwilling to signal a new round of QE when this meeting took place in early November, with covid infections still running low and the outcome of the election undecided, but things could be very different now.

There’s also a ton of economic data coming up. The preliminary Markit PMIs for November are out on Monday, before durable goods orders and the core PCE price index for October are released Wednesday, alongside the second estimate of Q3 GDP. None of these is usually a market mover.

The dollar may be more responsive to the factors outlined earlier, and how the US virus trend evolves. Any hints that a national lockdown is a realistic possibility when Biden takes over in January would only cement expectations for a more aggressive Fed.