Euro recovers mildly today but remains the second weakest major currency for the week, next to Swiss Franc. Dollar, on the other hand, lost momentum again. Dollar index was repelled from 101.96 resistance and is back below 101 handle. Overall, the financial markets are losing their directions. DJIA closed at another record high overnight, up 34.72 pts or 0.17%, at 20810.32. S&P 500 jumped to new high at 2368.26 but pared gains to close at 2363.81, just up 0.99 pts, or 0.04%. NASDAQ dropped for the second straight days and closed down -25.12 pts, or 0.43%. Treasury yields closed lower as recent sideway consolidation extends. Gold, however, extended recent rise to as high as 1254.8 so far today. WTI failed to break out from recent range and gyrates lower to 54.24.

It’s reported that US president Donald Trump told "some two dozen" heads of major companies that he has plans to bring millions of jobs back to the US. He was quoted as saying, "we are going to find out how we bring more jobs back". Without more details unveiled yet, the market is awaiting a joint session of Congress on February 28. Separately, the new US Treasury Secretary Steve Mnuchin indicated that the White House wanted to pass "very significant" tax reform by August. He signaled that the tax plans, together with deregulation measures, would boost US GDP growth to at least 3% in as soon as next year. Note that the US has not recorded full-year growth of 3% since 2005, while growth in 2016 was 1.6%. But after all, markets are cautious as there is no detail on anything yet.

In Eurozone, ECB executive board member Peter Praet talked down recovery in the region. He noted that "the growth pattern is still very much conditional on a substantial degree of accommodation." And, he noted that "these economies are still fundamentally fragile so no complacency is the main message." Also, Praet warned that "the recent bouts of (political) uncertainty are a source of concern, and represent a downside risk to the economic outlook." On the other hand, Bundesbank head Jens Weidmann was more positive and he said that "the upturn in the euro zone has consolidated and is increasingly secure."

On the data front, UK will release BBA mortgage approvals in European session. Canada CPI will be the main feature in US session. US will release new home sales.

EUR/USD’s recovery from 1.0493 temporary low continues today but stays below 1.0678 resistance. Intraday bias stays neutral first with a mild bearish outlook. We’re viewing fall from 1.0828 as resuming the larger down trend. Below 1.0493 will target 1.0339 low first. Break will confirm our bearish view and target parity. However, break of 1.0678 will dampen our view and turn focus back to 1.0828 resistance instead. 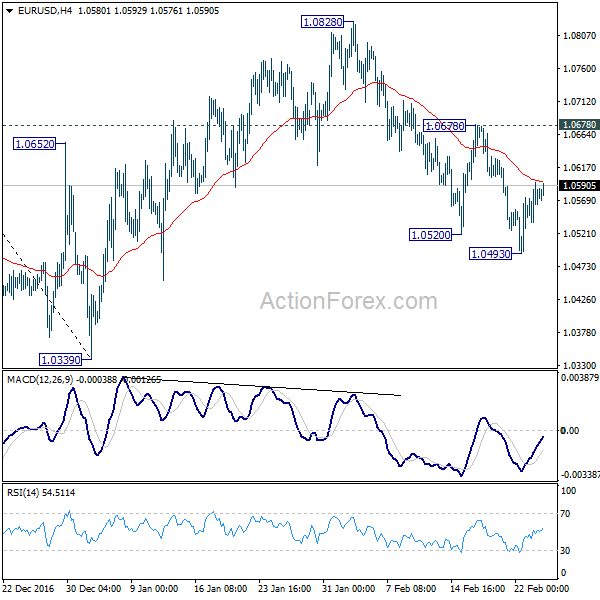 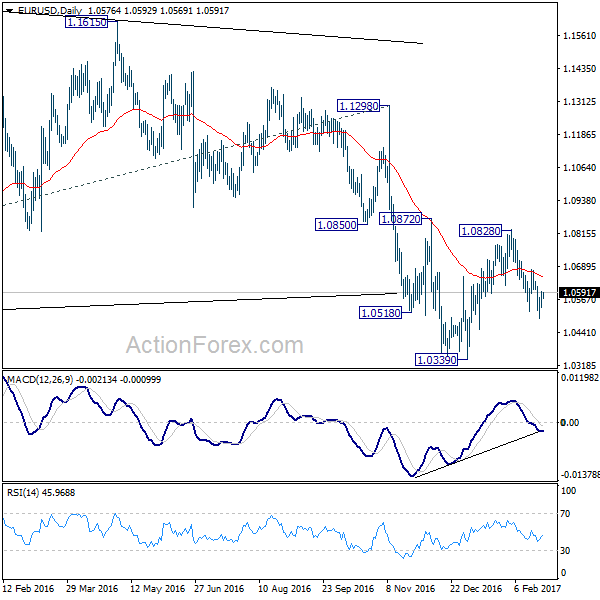