Sterling Dips as PM May Preparing for Scottish Referendum Call

Sterling dips notably against other major currencies in an other wise rather quiet Asian session. Selloff in the Pound is seen as a reaction to news that Prime Minister May is preparing for Scotland to call for another independence referendum. And that would come as May triggers the Article 50 for Brexit negotiation with EU by the end of March. It’s reported that May could agree to the vote on condition that it happens after completing the Brexit process. While Sterling weakens broadly, it’s so far kept well in range against Dollar and Euro. The larger move is seen in GBP/JPY which is heading back to 138.53 support.

Meanwhile, Dollar is mixed as attention turns to US president Donald Trump’s first address of Congress on Tuesday. Trump is expected to reveal his plan to dismantle the Affordable Care Act. Treasury Secretary Steven Mnuchin said that Trump would not touch social security spending and Medicare for now. But Mnuchin and Trump have been delivering contrasting messages about currency manipulation recently. Hence, what Trump would talk about is still wildcard.

There are also much expectation on Trump to deliver tax reform. It should be noted again that the bullish run in stocks was based on expectation of Trump’s expansive fiscal policy. However, yield topped back in December, suggesting that bond investors have turned cautious very early. And the lack of details on Trump’s economic policies also limited rally attempts in Dollar. Much volatility could be triggered by Trump’s address this week. And, the greenback could be vulnerable to selloff if Trump fails to live up to expectations again.

Busy economic calendar ahead with BoC

The economic calendar is very busy this week. But unlike the usual practice, NFP will not be released this Friday. BoC rate decision will catch some attention but would likely be a non-event. Here are some highlights for the week ahead:

GBP/USD dips notably today but stays in range of 1.2346/2705. Intraday bias remains neutral first and outlook is unchanged. Price actions from 1.1946 are viewed as a consolidation pattern, with rise from 1.1986 as the third leg. In case of another rise, we’d expect upside to be limited by 1.2774 to bring larger down trend resumption. On the downside, below 1.2346 will revive the case that such consolidation is completed at 1.2705 already. In that case, intraday bias will turn back to the downside for retesting 1.1946 low. 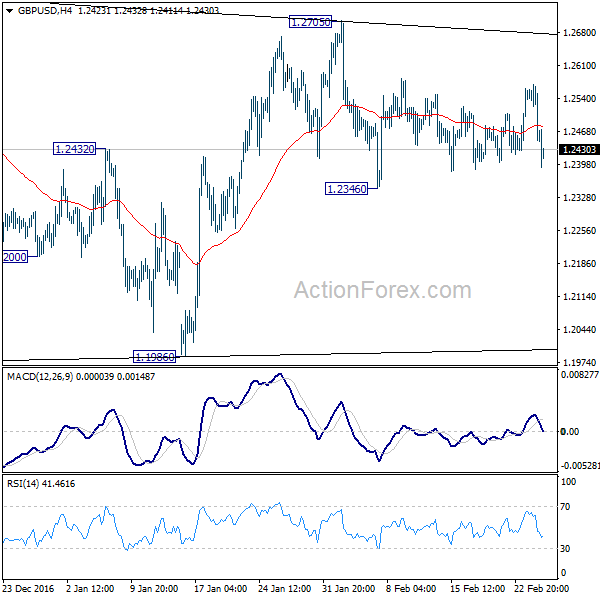 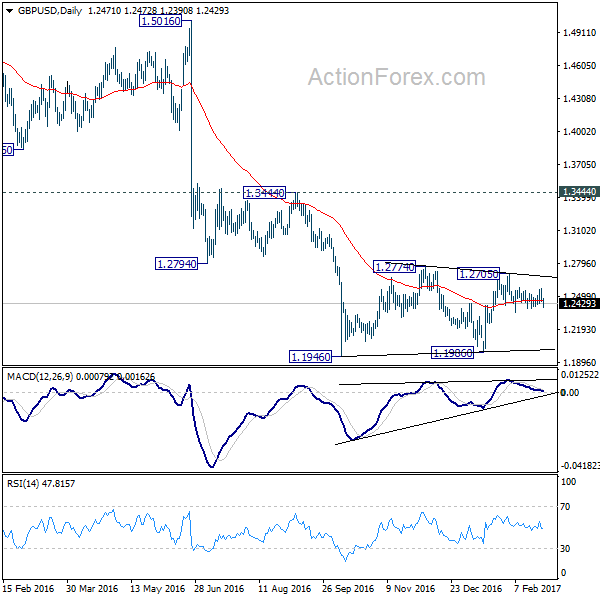