Dollar continues to ride on speculation of March rate hike and positive response to president Donald Trumps’ Congress address. Released from US, personal income rose 0.4% in January while spending rose 0.2%. Headline PCE accelerated to 1.9% yoy but missed expectation of 2.0% yoy. Core PCE was unchanged at 1.7% Yoy, below expectation of 1.8% yoy. ISM manufacturing will be a key piece of data to look at and strong reading could give Dollar’s rally more fuel. Fed will also release Beige Book economic report in the afternoon. For the time being, the greenback will like stay firm. Technically, 1.0493 support in EUR/USD and 114.94 resistance in USD/JPY should be watched.

Dollar index jumps to as high as 101.88 so far today and the break of 101.79 resistance indicates resumption of whole rebound from 99.23. Further rise should be seen back to retest 103.82 high. At this point, there is no clear sign of up trend resumption yet. Therefore, we’d be cautious on topping around there. But, as the index depended 99.11/43 support zone, the medium term up trend is expected to resume sooner rather than later. Meanwhile, on the downside, break of 100.66 minor support will turn focus back to 99.23 instead.

UK PMI manufacturing dropped to 54.6 in February, down from 55.9, and missed expectation of 55.7. Nonetheless, Markit noted that "the UK manufacturing sector continued its solid start to the year." And, "although rates of expansion in output and new business lost impetus in February, growth remained comfortably above the long-run averages. The survey is signalling quarterly manufacturing output growth close to the 1.5 per cent mark so far in the opening quarter which, if achieved, would be one of the best performances over the past seven years." Also from UK, mortgage approvals rose to 69.9k in January while M4 money supply rose 0.9% mom. BR shop price index dropped -1.0% yoy in February.

GBP/USD’s sharp fall today and break of 1.2346 indicates that rebound from 1.1986 has completed at 1.2705 already. Intraday bias is turned back to the downside for retesting 1.1946/86 support zone. The consolidation pattern from 1.1946 has possibly completed at 1.2705 too. Break of 1.1946 will confirm our bearish view and resume the larger down trend. Nonetheless, on the upside, above 1.2478 minor resistance will delay the bearish case and turn bias neutral first. 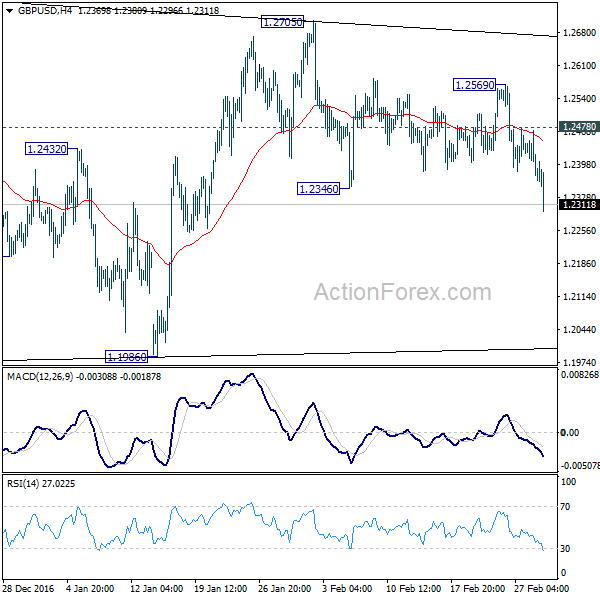 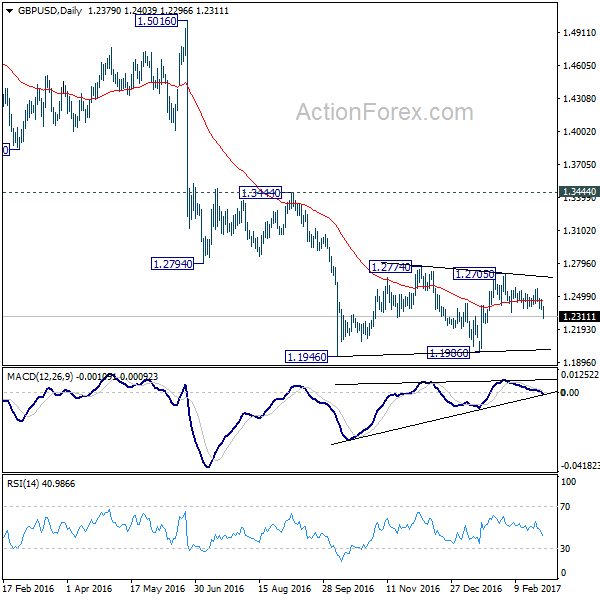