Dollar Maintains Bullishness, Except Versus Euro

Dollar stays firm against most major currencies on speculations of Fed March hike. Nonetheless, the greenback trades lower against Euro as EUR/USD defended 1.0493 near term support. Fed fund futures are pricing in more than 77% chance of a March hike after a wave of hawkish comments from Fed officials. The focus will now turn to Fed chair Janet Yellen’s speech, as well as that of vice chair Stanley Fischer today. Traders would be eager to get confirmation on their expectations. Meanwhile, next Friday’s non-farm payroll report could be the final piece of data policymakers would watch before FOMC meeting on March 14/15.

Sterling weakens against Euro today after weaker than expected services data. UK PMI services dropped to 53.3 in February, down from 54.5 and missed expectation of 54.0. Markit noted that "UK service sector firms remained in expansion mode during February, but growth momentum eased further from the 17-month peak seen at the end of 2016." And, "the slowdown mainly reflected a softer pace of new business growth, which some respondents linked to more cautious spending among consumers." At the same time, Markit chief business economist Chris Williamson said that "inflationary pressures remained the highest for six years as firms struggled with rising costs associated with the weak pound, but optimism about the year ahead remained elevated by recent standards."

Japan CPI ticked up in January

Japan national CPI core rose to 0.1% yoy in January, up from -0.2% yoy, above expectation of 0.0% yoy. That’s also the first uptick in 11 months. Tokyo CPI core, however, dropped -0.3% yoy in February, unchanged from prior month’s reading, and missed expectation of -0.2% yoy. The jump in National CPI core is seen mostly as a recent of energy prices. There is still no clear evidence of momentum in underlying inflation, including wages. And, the reading is still far below BoJ’s 2% target. It’s difficult for BoJ to start scaling back the massive monetary stimulus any time soon. Unemployment rate dropped 0.1% to 3.0% in January. Household spending dropped -1.2% yoy. Consumer confidence dropped 0.1 to 43.1 in February.

EUR/USD recovers ahead of 1.0493 after forming a temporary low at 1.0494. Intraday bias remains neutral as the pair is still bounded in range of 1.0493/0630. Overall near term outlook stays bearish with 1.0630 resistance intact. Downside breakout is expected sooner or later. Fall from 1.0828 is resuming the larger down trend. Below 1.0493 will target 1.0339 low first. Break will confirm our bearish view and target parity. However, break of 1.0630 will dampen our view and turn focus back to 1.0828 resistance instead. 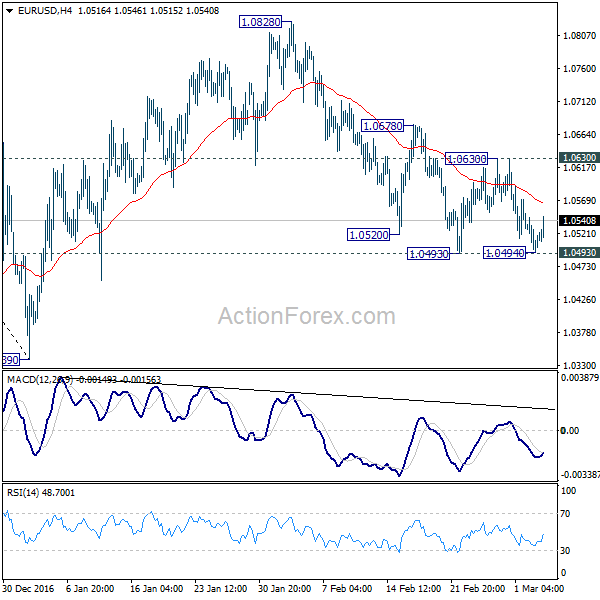 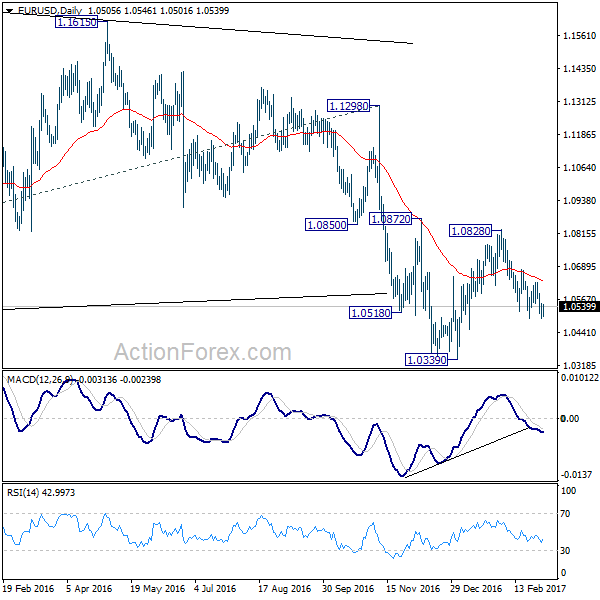