Yen Mildly Lower on a Bunch of Weak Data

The Japanese Yen edges mildly lower in very quiet holiday trading today. A bunch of weak economic data is weighing slightly on the currency. Japan national CPI core dropped -0.4% yoy in November, unchanged from October’s reading and missed expedition of -0.3% yoy. That’s also the ninth straight month of decline in prices. Tokyo CPI core dropped -0.6% yoy, worsened from October’s reading of -0.4% yoy and missed expectation of -0.4% yoy. Nonetheless, it’s hopeful that the sharp depreciation in Yen since November would eventually provide some inflationary effect on prices that help lift the burden from BoJ for additional stimulus. Also from Japan, unemployment rate rose to 3.1% in November, above expectation of 3.0%. Household spending dropped -1.5% yoy in November, much worse than expectation of 0.2% yoy rise. Housing starts rose 6.7% yoy in November, much lower than expectation of 9.6% yoy.

Yen remains the weakest major currency this month, followed by Euro. NZD/JPY’s breach of 83.36 resistance is seen as an indication that medium term decline from 94.01 has completed at 68.88. NZD/JPY received strong support from 50% retracement of 44.19 to 94.01 at 69.10. Further rise would stay in favor as long as 77.68 support holds. Sustained trading above 83.36 would pave the way to retest 94.01. We’re not anticipating a break there on first attempt. Meanwhile, break of 77.68 will argue that the cross is developing into range trading between 68.88 and 83.36 instead. 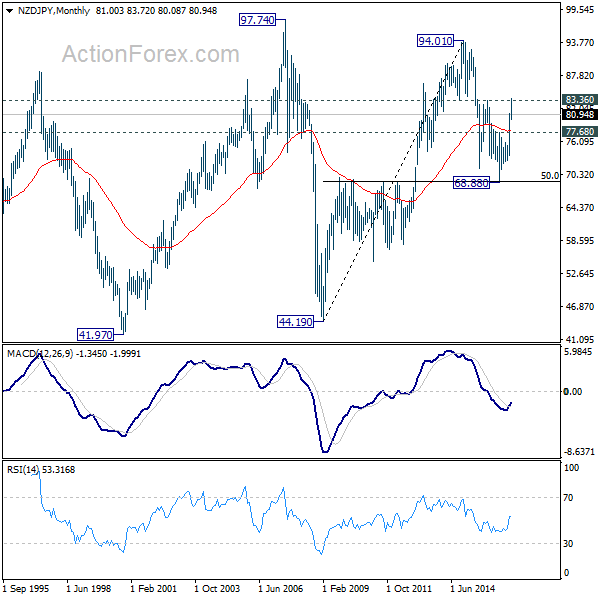 On the other hand, Dollar remains the second strongest major currency for the month, next to Sterling. The greenback has been boosted by expectation of Donald Trumps’s expansive policies, surging yield and FOMC’s forecast of fast rate hike in 2017. Trump is scheduled to take office as the 45th president of US on January 20, 2017. And Dollar’s fate will depend on what policies would Trump actually deliver. Dollar index turned into sideway consolidation after hitting 103.65. But near term outlook will stay bullish as long as 102.05 resistance turned support holds. The index is expected to target 61.8% projection of 78.90 to 100.39 from 91.91 at 105.1.9 next.

USD/JPY is still bounded in consolidation from 118.65 and intraday bias stays neutral for sideway trading. In case of deeper fall, downside of retreat should be contained by 114.76 minor support and bring another rise. Above 118.65 will extend the current rally from 98.97 to test 125.854 high. We’d be cautious on topping at 125.85 on first attempt. 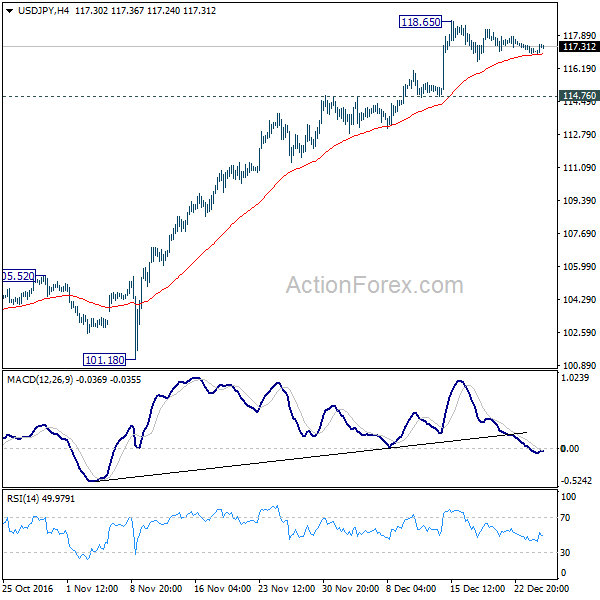 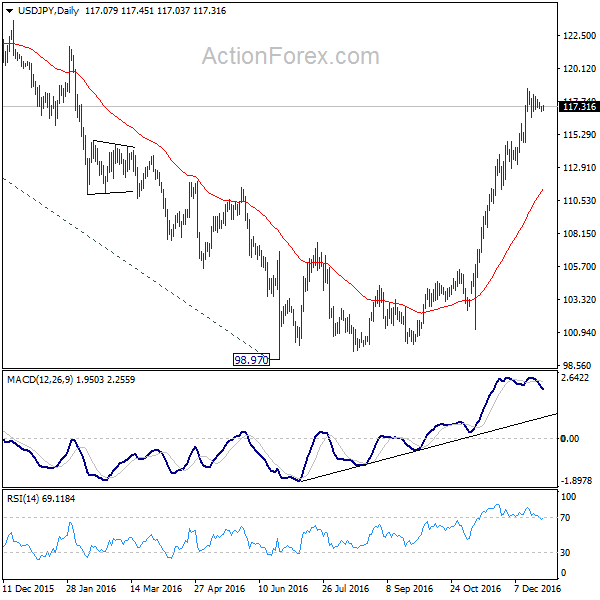