Trading in financial markets are generally subdued in holiday mood. DJIA closed up 11.23 pts, or 0.06%, overnight at 19945.04, still struggling to take out 20000 handle. S&P 500 also closed up 5.09 pts, or 0.22%, at 2268.88, but stays in recent range. Asian markets are mixed with little movements. US yields closed higher with 10 year yield up 0.02 to 2.563 but like others, stayed in tight range. Notable strength is seen in gold this week, hitting as high as 1151.7, comparing to recent low at 1124.3. There is prospect of a stronger rebound in gold in near term. WTI crude oil also strengthened mildly this week and breached 54 handle. But recent price actions suggest that it’s staying in consolidation since hitting 54.51 and more sideway trading is in favor.

In the currency market, Canadian Dollar is notably weaker than others, expect Yen, despite mild strength in oil price. USD/CAD is set to take on key near term resistance at 1.3588. While Canadian dollar outperformed other commodity currencies this month, there is prospect of a pull back in near term. Daily MACD in the AUD/CAD chart has turned above signal line, indicating short term bottoming at 0.9677. Rebound from there would now extend higher towards 55 days EMA (now at 0.9912). However, we’d expect strong resistance from 38.2% retracement of 1.0396 to 0.9677 at 0.9952. Fall from 1.0396 is expected to extend to medium term channel support at a later stage. 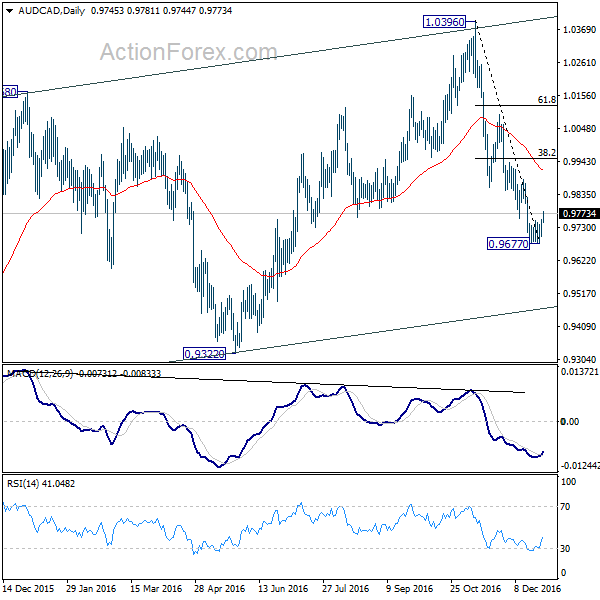 A short term bottom was also formed in EUR/CAD at 1.3817. Rebound from there is expected to extend to 55 days EMA (now at 1.4278). We’d be cautious on strong resistance from 38.2% retracement of 1.5279 to 1.3817 at 1.4375 to limit upside and bring another decline next medium term support at 1.3019. However, bullish convergence is seen in daily MACD. Sustained trading above 1.4375 fibonacci level will raise the chance of reversal. That is, whole corrective pattern from 1.6103 has completed and will turn focus back to trend line resistance (now at 1.5166). 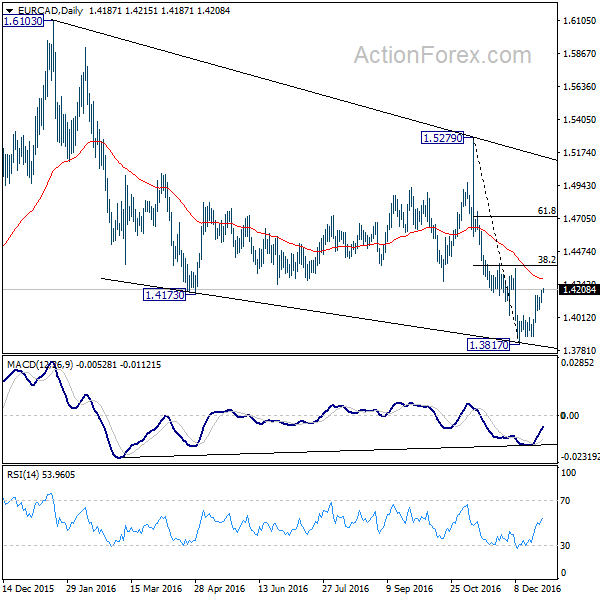 USD/CAD’s rally continues to as high as 1.3579 so far. We’d stay cautious on strong resistance from 1.3588 to limit upside and bring near term reversal. Break of 1.3471 support should confirm near term topping, likely with bearish divergence condition in 4 hours MACD. In that case, intraday bias will be turned back to the downside for 1.3080 support. Sustained break of 1.3588, though, will target next fibonacci level at 1.3838. Overall, price actions from 1.2460 low are still viewed as a corrective move. 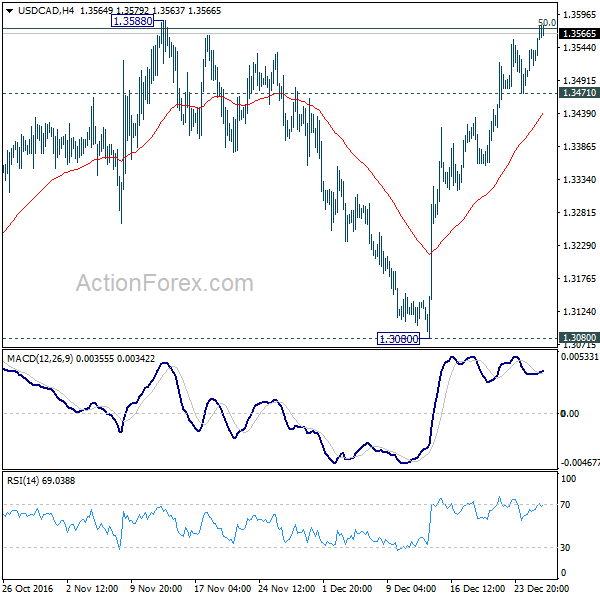 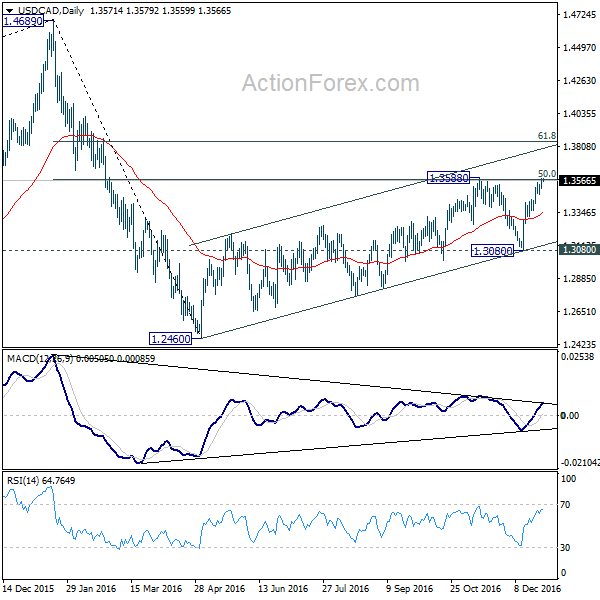