Sterling is sold off across the board today and remains weak in early US session. The pound falls on fear that UK will opt for hard Brexit and lose access to the single market in EU. On the other hand, FTSE surges to new record high at 7239. UK prime minister Theresa May. May emphasized in a televised interview that Brexit is about "getting the right relationship, not about keeping bits of membership." And she noted that the right relationship is about being "have control of our borders, control of our laws" while having the "best possible deal" for trading with EU. The comments indicated that control of immigration and law prevail access to the single markets. Meanwhile, May also pledged to set out "some more details in the coming weeks" about Brexit ahead of the March 31 deadline for triggering Article 50 for Brexit negotiations.

Technically, GBP/USD dives through 1.2200 support to resume recent fall from 1.2774. GBP/JPY also drops through 142.16 support which confirms short term reversal, topping at 148.42. EUR/GBP also breaches 0.8666 resistance to resume recent rebound from 0.8303. Among the Sterling crosses, GBP/AUD is the biggest mover today. The sharp decline and strong break of 55 day EMA confirmed short term topping at 1.7204 and completion of the rebound from 1.5665. Note that GBP/AUD was held below 38.2% retracement of 2.0535 to 1.5665 and inside medium term channel. The developments argues that larger down trend 2.2397 is intact and is possibly resuming. Near term outlook is now bearish for a test on 1.5665 low.

A report by S&P chief European economist noted that inflation in Eurozone will turn around in 2017. However, ECB would look through the rise in inflation, pushed by energy prices. In steady, he expected ECB to maintain monetary policy accommodations until core inflation returns to sustainable rising path, "not before 2018". On the other hand, Germany’s BbB banking association urged ECB to start "a very careful change in policy direction" because of pick-up in inflation. The BbB noted that "the low interest rates are a huge problem for banks, but the ECB’s interest rate turnaround should be implemented carefully."

On the data front, Eurozone Sentix investor confidence rose sharply to 18.2 in January, versus expectation of 12.8. Sentix noted "the Eurozone’s economic indices finally align with the already positive development of the indices of other world regions." And, "the region benefits from repeated announcements by president-elect Trump to establish a mutually beneficial relationship between the two countries." Also from Eurozone, unemployment rate was unchanged at 9.8% in November. German trade surplus widened to EUR 21.7b in November, industrial production rose 0.4% mom. Elsewhere, Australia building approvals rose 7.0% mom in November.

Intraday bias in GBP/USD remains on the downside for the moment. Prior break of 1.2200 confirms resumption of fall from 1.2774 for 1.1946 low. As noted before, corrective rise from 1.1946 has completed at 1.2774 and larger down trend is possibly resuming. This is supported by the rejection from 55 day EMA. Decisive break of 1.1946 will confirm this bearish case. Meanwhile, break of 1.2432 resistance will indicate that fall from 1.2774 is completed and correction from 1.1946 is extending with another rise. 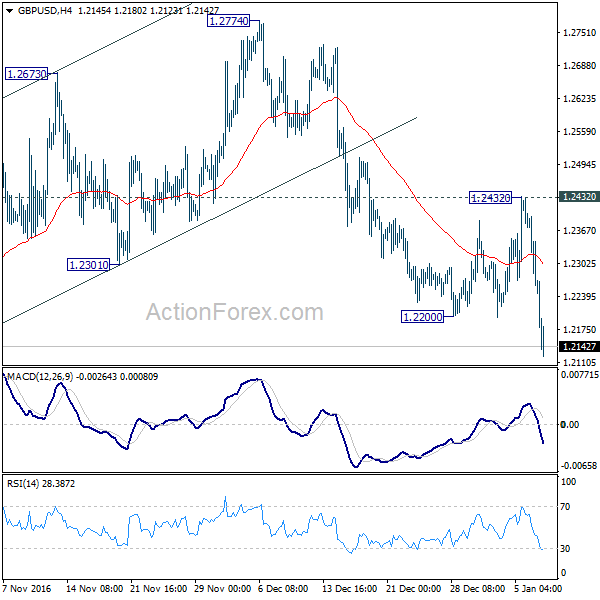 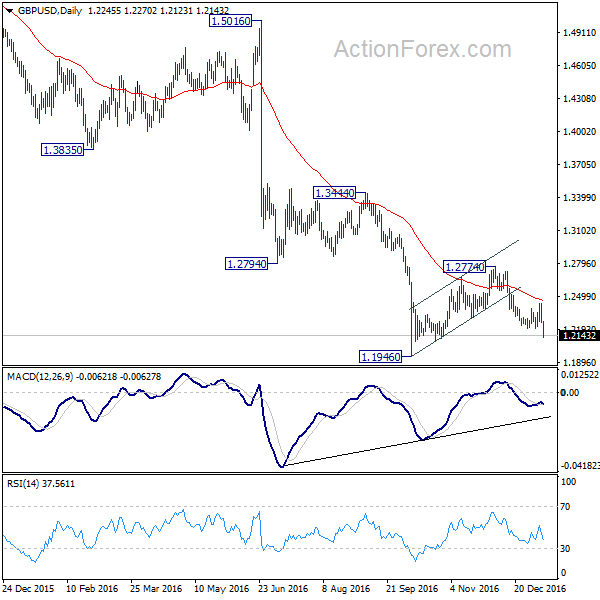 Bank of England May Not Join the Tightening Club Yet