Sterling ended last week as the weakest major currency. The Conservatives’ losing of majority in the parliament created much uncertainty on politics, economic policies and Brexit negotiation. While the selloff in the Pound was steep, it’s so far holding on to key support level against Dollar, Euro and Swiss Franc. And it seems like traders are still holding some of their bets to watch the developments in near term. Euro ended as the second weakest major currency for the week as traders were not satisfied with the tiny hawkish move in ECB’s language. And the general weakness in European majors also dragged the Swiss Franc.

While the anticipation on former FBI Director James Comey’s testimony was high, the reactions were quite muted. It looked like the markets have finally moved on with the issue while Dollar and yields were ready for a rebound. But then the steep selloff in NASDAQ on Friday reversed much of the gains in Dollar index and yields. The greenback ended as the forth weakest major currency. Commodity currencies were the strongest ones with Aussie and Kiwi leading the way. But to us, it’s the resilience of Canadian Dollar, with the background of sharp decline in oil price, that was more impressive.

Markets will continue to keep an eye on the development in UK for sure. In addition, four central banks will meet this week including Fed, SNB, BoE and BoJ.

Political uncertainty to persist in UK

After the election backslash, Minister Theresa May vowed to hand on as the Prime Minister and was preparing to form a minority government with Northern Ireland’s Democratic Unionist Party. But it remains uncertain for how long May can stay. Her co-chiefs of staff Nick Timothy and Fiona Hill resigned on Saturday for the failure of the election campaign. But that seems to be insufficient for some MPs as there were still reports of calls for May’s resignation. The MPs are particularly unhappy with May’s manifesto and named that as the turning point of the campaign. In addition, there were also criticism on the alliance with the socially conservative DUP on the latter’s anti LGBTI stance. Even if May is staying on, there are so far little clues on how she’s going to shake up her administration. May only said on Friday that she would retain five key Cabinet ministers.

Brexit negotiation to start on June 19, but how?

Any information regarding Brexit negotiation will also be closely watched this week. Formally, the negotiation is scheduled to start on June 19. It’s believed that it will still start on the date. Europeans officials have already make themselves clear that they are ready. German Chancellor Angela Merkel said that "we are preparing for Brexit" and "we are going to defend the interests of the 27 countries which will be in the EU in the future". And, "I understand that the UK is going to respect the timetable. We want to do it fast, respecting the time table."

Other Sterling risks on CPI and BoE voting

BoE meeting is a key event in UK next week, it is generally expected that the main policy rate will be held at 0.25% while the asset purchase target kept at GBP 435b. The voting will be the main focus. In particular, markets would like to see if Kristin Forbes would continue to vote for a rate hike. And head of the meeting, UK will also release CPI, employment and retail sales. Headline CPI is expected to be unchanged at 2.7% yoy in May and a surprise there might change Forbes’ mind. 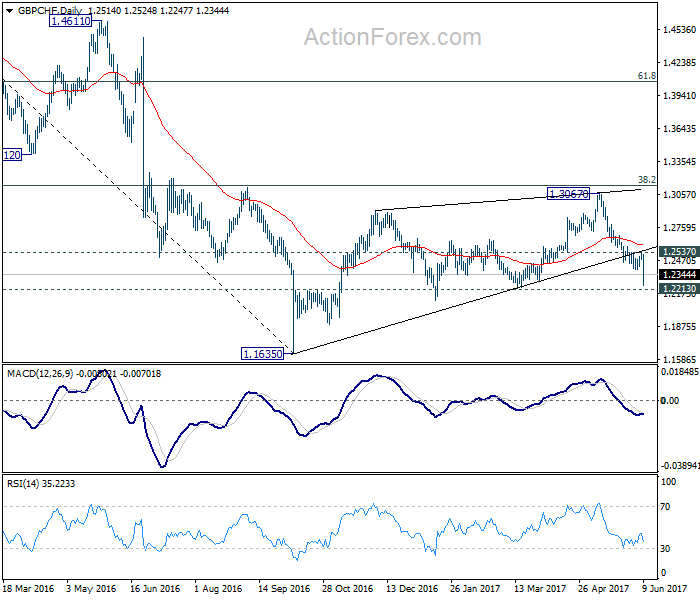 ECB kept key interest rate at 0% and deposit rate at -0.4% last week as widely expected. Asset purchase is held at EUR 60b per month, run through December this year. President Mario Draghi said risks to outlook are now "broadly balanced" as the Eurozone is enjoying "stronger momentum" as a "somewhat faster pace than previously expected. Nonetheless, he maintained that substantial degree of monetary accommodation is still needed.

And with that in consideration, ECB did a tiny step and closed the door for further rate cut. It noted in the statement that "the Governing Council expects the key ECB interest rates to remain at their present levels for an extended period of time, and well past the horizon of the net asset purchases." Previously ECB said that "… at present or lower levels… ". However, ECB maintained the open door for extending the asset purchase program as it noted that "net asset purchases, at the new monthly pace of €60 billion, are intended to run until the end of December 2017, or beyond, if necessary."

Euro holds on to near term support levels

Euro bulls were clearly unhappy with the announcements. EUR/USD struggled to find buying to break through 1.1298 key resistance and closed lower at 1.1194. Nonetheless, it’s maintaining bullish outlook by staying above 1.1109 support. EUR/JPY also extended recent consolidation from 125.80 but holds above 121.61 near term fibonacci level so far. EUR/AUD also suffered deep pull back through 1.4927 near term support. But EUR/AUD is also maintaining bullish outlook by holding above 1.4669 support. EUR/CAD also lost much momentum after hitting 1.5257 and faced much resistance from 1.5279. Some more consolidations would be seen in near term. But outlook will stay bullish for another rise as long as 1.4823. Hence, overall, Euro is now is in a consolidation phase and more upside is expected at a later stage. 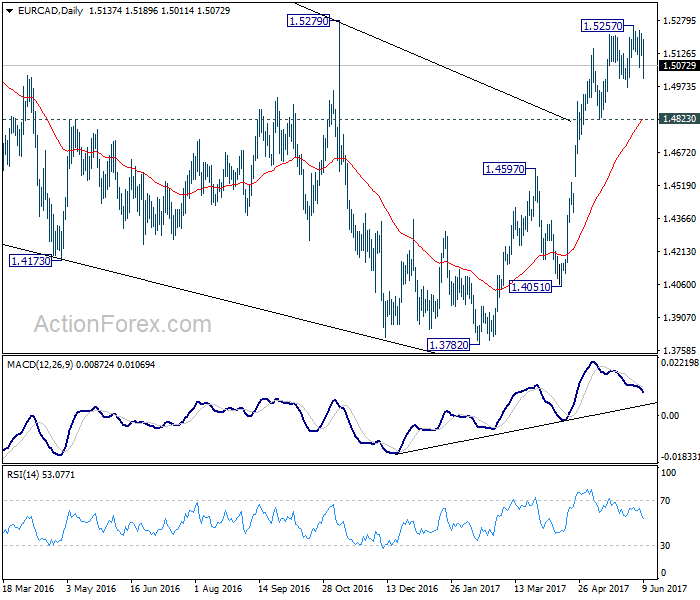 Markets generally shrugged off Comey’s testimony as no "smoking gun" for US President Donald Trump was found. Focus will now turn to FOMC rate decision. Fed is still widely expected to raise the target range to 1.00-1.25%. Fed fund futures are pricing in 99.6% chance of that. It should be noted that the base case of many Fed officials and economists is for Fed to hike a total of three times this year, followed by the start to shrink the balance sheet. However, recent weakness in inflation and job data triggered some talks that the economy might not be able to withstand three hikes this year. This week’s FOMC meeting will bare additional significance of release of new economic projections and a press conference. Markets will scrutinize the new information to see if Fed officials have changed their mind. To us, risks are more skewed to the downside for the greenback.

Developments in stocks and yields will also be watched. DOW climbed to record close at 21271.97 last week. But NASDAQ tumbled sharply on Friday, by -1.8% to close at 6207.92, way off the day high at 6341.70. The so-called "Big Five", Apple, Alphabet, Microsoft, Facebook and Amazon lost nearly $100b in market value. Some blamed the selloff on sector rotation. But it remains to be seen if it’s development into a correction of a longer term. 55 day EMA at 6063.85 is a key level to watch. Rebound from there will keep index inside medium term rising channel and maintains the trend. But a strong break there would open up deep pull back to 5842 fibonacci support.

The developments in 10 year yield and dollar index are also worth a mention. TNX dipped to 2.133 last week but tried to draw support from 38.2% retracement of 1.336 to 2.621 at 2.130 and recovered. Daily MACD also points to "possible" bullish convergence. But TNX lost upside momentum after hitting 2.229 and has clearly followed NASDAQ lower. It’s also kept well below 2.297 near term resistance and thus maintained near term bearish outlook. Further selloff in US stocks this week will drag down TNX and put focus back to 2.130. Break there would likely push TNX further lower to 2.000 handle, which is close to 50% retracement at 1.978.

A similar picture is seen in Dollar index as DXY edged lower to 96.51 but tried to draw support from 61.8% retracement of 91.91 to 103.82 at 96.46 and recovered. Upside momentum has been very week so far and there is no clear sign of reversal yet. 97.77 is the first hurdle but the real test would lie in 55 day EMA at 98.55. We’ve pointed out the risk that fall from 103.82 is developing into a medium term correction. And sustained break of 96.46 will pave the way for 91.91 key support next. And when that happens, it would be accompanied by EUR/USD’s break of 1.1298 key resistance which would trigger accelerating selling in Dollar. Hence, overall, there is prospect of a reversal in Dollar if stocks would stabilize, yield and Dollar index can build up more momentum. But over risk is much more on the downside for the greenback. FOMC meeting could be the key.

USD/JPY dropped to as low as 109.11 last week but recovered since then. Our sell USD/JPY at 110.80 was not filled and we will cancel this order first. We’re expecting Sterling to be troubled by on-going political uncertainty. The refrained selloff last week is seen as a opportunity to sell the Pound. On the other hand, disappointment on ECB limited Euro’s strengthen. But so far the pull back is shallow and corrective. We’d anticipate ECB to gradually lean more towards a neutral stance with more positive economic data. So, we’ll try to buy EUR/GBP on dip to 0.8740 this week, with stop at 0.8640. We’re trading for a break out through 0.8851 resistance for 0.9304 high.

GBP/USD’s sharp decline and break of 1.2768 support last week indicates resumption of decline from 1.3047. Also, it affirmed the case that consolidation pattern from 1.1946 has completed at 1.3047 already, well below 1.3444 key resistance. Initial bias stays on the downside this week for 1.2614 key near term support. Break there would confirm our bearish view and target a test on 1.1946 low next. On the upside, above 1.2802 will bring turn bias neutral and bring recovery. But outlook will remain bearish as long as 1.2977 resistance holds. 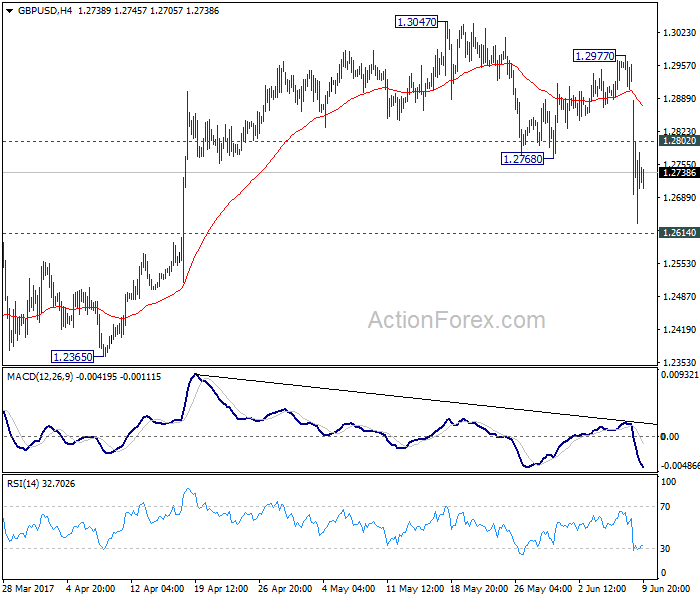 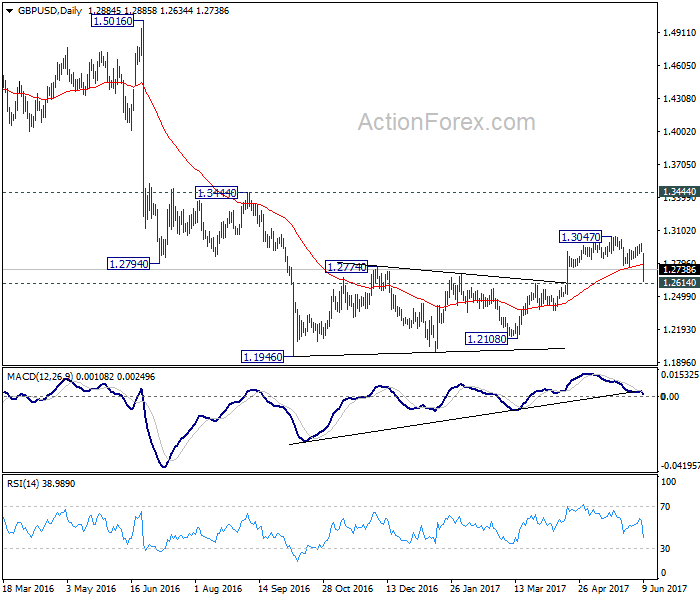 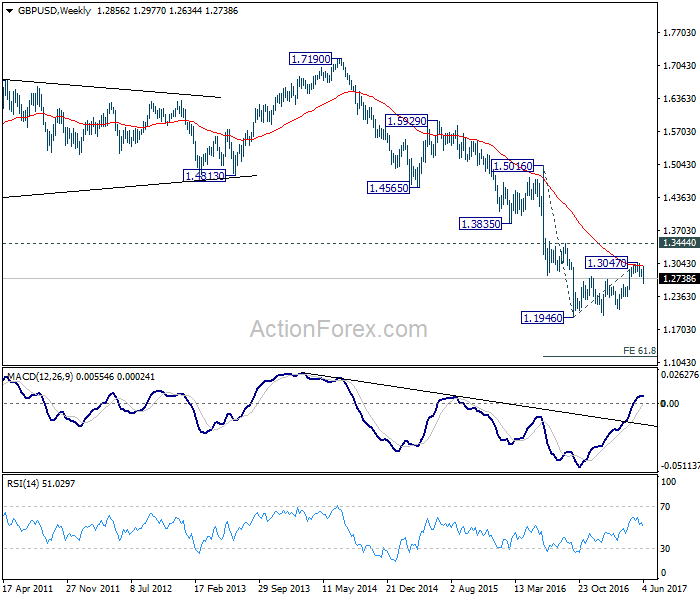 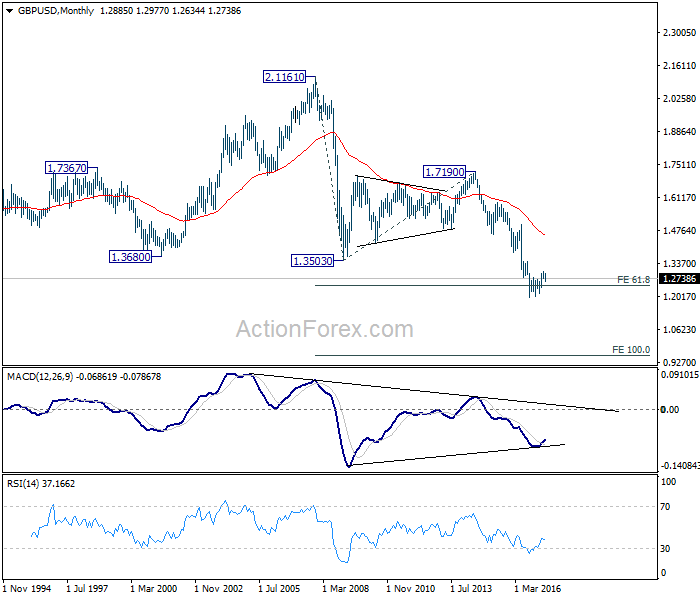