Swiss Franc Weakness to Persist, Risks Skewed to the Downside for Dollar and Sterling

While there were quite a number of key events last week, Swiss Franc came up as the surprised biggest mover. The Franc tumbled broadly as safe haven funds flowed out in accelerated pace. Franc has indeed ended the week down over -3% against Sterling, Aussie, Canadian, Kiwi and Euro. Against Yen and Dollar, Franc closed down -2.8% and -2.4% respectively. Dollar ended as the second weakest one as FOMC statement was taken as a dovish one while GDP price data missed. Also, continuous political drama in the White House means that there is still no clear light on when US President Donald Trump’s tax reform would be implemented. Commodity currencies closed generally higher as supported by surge in energy and metal prices. Nonetheless, another surprise was that Sterling ended as the strongest one as it recovered on position squaring ahead of BoE Super Thursday.

Swiss Franc and Euro are on two sides of the same coin. Funds will flow into the Swiss Franc when risks in Eurozone increase and flow out when situations stabilize. This could be clearly demonstrated by the strong rise in EUR/CHF from 1.0670 to 1.0812 on a gap open following French President Emmanuel Macron’s win in the first round of election. On the background, political risks in Eurozone, according to some ECB officials, had become "tailwinds" already. Growth momentum in Eurozone has improved, which can be illustrated by IMF’s upgrade of growth forecast. ECB is now widely expected to start at least tapering its bond purchases next year and stimulus exit is not too far away. Meanwhile, the strong rally in energy and metal prices would likely boost Eurozone inflation which further affirm the direction of ECB policy path.

Policy divergence is a key in EUR/CHF’s strong rise and Swiss Franc’s selloff. SNB chairman Thomas Jordan reiterated earlier in the week that the Franc remained significantly over-valued, indicating that he’s not ready to change the negative rates policy. But in our view, the trigger for the accelerated selloff was the successful bond sales in Greece, the first one since 2014. Greece sold EUR 5b of its five-year bond was sold at yield at 4.625%, notably lower than 4.95% back in the auction in 2014. The overall developments pushed Spanish/German yield spread to the tightest level since 2015. Italian/German yield spread also dropped to the lowest level since December. All point to reduced need for safe haven parking in the Franc. And indeed, Franc could now be viewed as a ideal candidate for carry trades as the financial markets are generally in full risk-on mode.

Swiss to be weaker than even Yen

Development in CHF/JPY suggests that there is more downside potential in the Swiss Franc ahead. Last week’s sharp fall argues that the corrective rise from 101.66 could have completed with three waves up to 118.69 already, on bearish divergence condition in daily MACD. Focus is now back on 112.48 support. Break there will affirm this bearish view pave the way to 107.67 key support level next. As we noted many times before, we’re expecting Yen to be pressured as markets enter into an era of monetary stimulus exit. Current reversal in CHF/JPY argues that the Swiss Franc could be even more pressured. 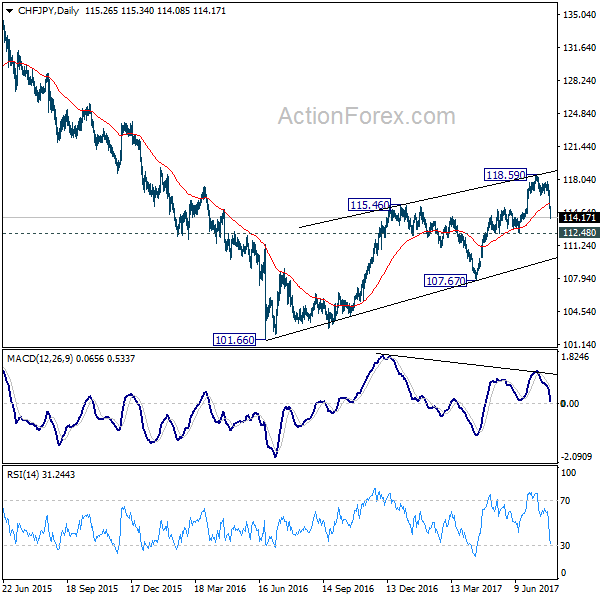 Dollar ended generally lower as markets perceived FOMC statement as a dovish one. Fed left its monetary policy unchanged, maintaining the federal funds rate target at 1-1.25%. The Fed made two tweak in the statement, though. First, it noted that balance sheet reduction would begin ‘relatively soon’, signaling that the official announcement would come in September. And that means, Fed will pushed back another rate hike to December to hold the card on its hand first. Second, policymakers revised lower the outlook on core inflation. Q2 GDP grew 2.6% annualized, up from prior 1.4% and versus consensus of 2.5%. However, GDP price index slowed to 1.0%, down from 1.9% and below expectation of 1.3%.

Adding pressure to the Greenback, IMF kept global growth forecast unchanged at 3.5% for 2017 and 3.6% for 2018. But, growth forecasts for the US was lowered to 2.1% in 2017 and 2.1% in 2018, down from April projection of 2.3% and 2.5% respectively. IMF noted the "uncertainty" over US President Donald Trump’s policies as the main factor for the downward revision. IMF said that "the major factor behind the growth revision, especially for 2018, is the assumption that fiscal policy will be less expansionary than previously assumed, given the uncertainty about the timing and nature of U.S. fiscal policy changes."

In addition, IMF said in another report that the US dollar was overvalued by 10% to 20% based on near-term economic fundamentals. Meanwhile, Euro, Yen and Yuan exchange rate are broadly in line with fundamentals. IMF also urged US to address current account imbalances and warned that "if they’re not dealt with appropriately and through the right policies, we could have a backlash in the form of protectionism."

Sterling recovered ahead of BoE, but risks skewed to the downside

While Sterling ended higher against all others last week, there was no indication of change in trend yet. Indeed it was merely traders adjusting positions ahead of BoE Super Thursday. And, it should be noted that UK was another country IMF lowered growth forecast for this year. Q2 GDP released last week showed sluggish 0.3% qoq growth only. CPI slowed sharply from 2.9% yoy in 2.6% yoy in June and that’s a key factor limiting any rebound attempt in the Pound. BoE super Thursday and PMIs would be closely watched this week.

There is little chance for BoE to hike interest rate this time. The most hawkish member Kristin Forbes has left the MPC already. It’s uncertain whether her replacement would vote for a hike. Chief economist Andy Haldane, though hawkish, seems not ready to vote for a hike yet. Overall, there would be at most three members voting for a hike, and the base case could indeed be two, just Michael Saunders and Ian McCafferty. Should either Saunders or McCafferty changes is mind, that would be a rather dovish voting. BoE’s updated forecast will also be watched.

Volatility for sure this week

Looking ahead, there are quite a number of important events scheduled this week. And volatility is like certainty. ISM indices and non-farm payroll are important data. But we’d like to emphasize that they’re not going to change Fed’s plan to start unwinding the assets in September. And Fed will need a string of strong inflation related data, including wage growth to convince it to hike again in December. Dollar’s risks to NFP are skewed to the downside and any post NFP rebound might be short-lived. In addition to that UK will release PMIs and BoE rate decision. Eurozone will release PMIs and CPI. Canada job report will be a key for the Canadian Dollar. RBA meeting and a string of Chinese data will be important for commodities and Aussie.

EUR/CHF surged sharply to as high as 1.1405 last week as recent rally accelerated. The strong break of 1.1198 resistance confirmed underlying bullishness. Initial bias remains on the upside this week. Current rise will target 200% projection of 1.0652 to 1.0986 from 1.0830 at 1.1498. On the downside, below 1.1304 minor support will turn intraday bias neutral and bring consolidations, before staging another rally.

In the bigger picture, sustained break of 1.1198 key resistance confirms resumption of the long term rise from SNB spike low back in 2015. In this case, EUR/CHF would eventually head back to prior SNB imposed floor at 1.2000. For now, this will be the favored case as long as 1.1087 resistance turned support holds. 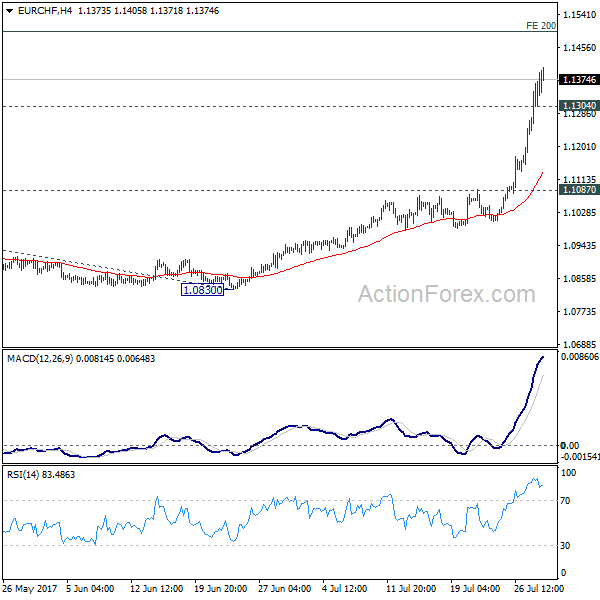 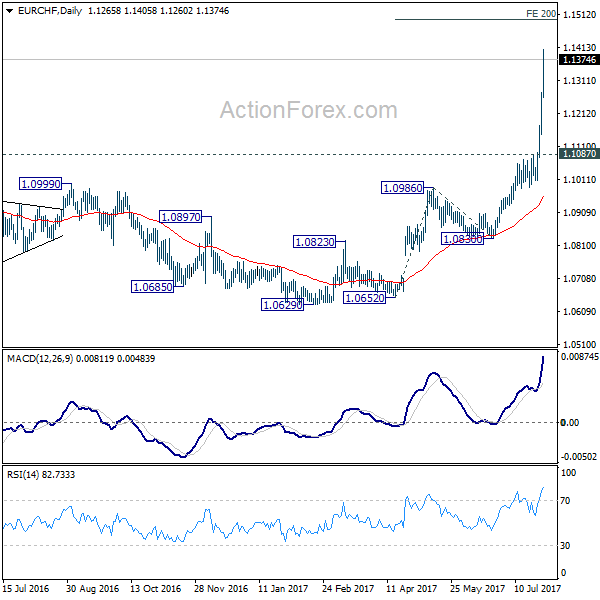 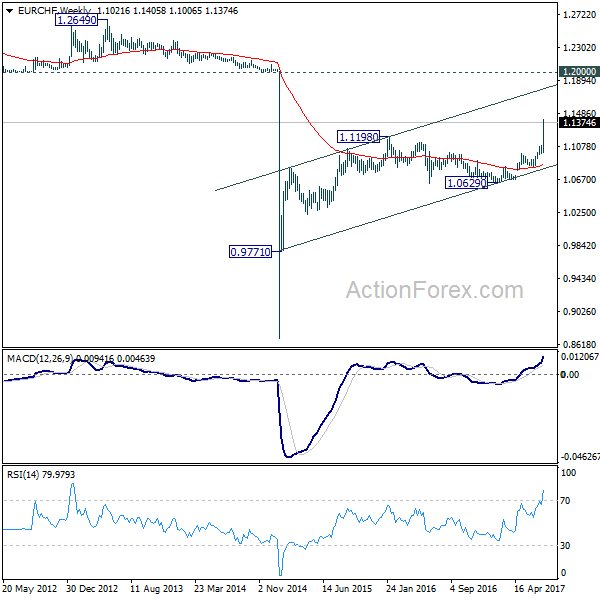 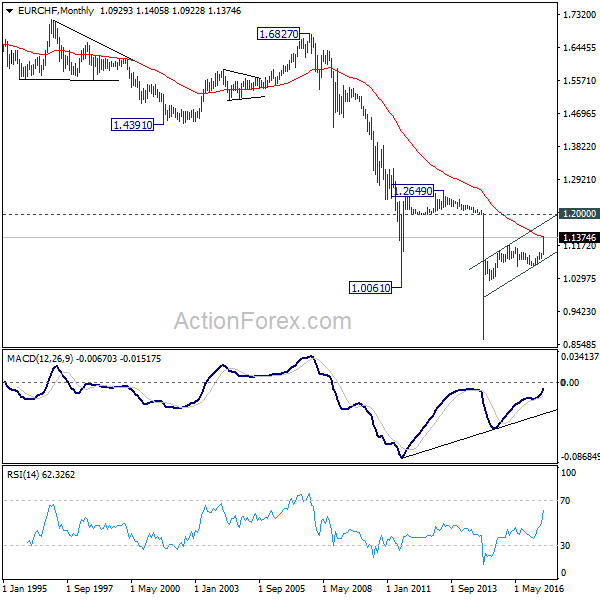