Dollar ended the weak as the weakest major currency as weighed down by a number of factors. Judging from the fact that Yen and Swiss Franc were the strongest ones, risk aversion was a key factor in driving the greenback down. There is so far no resolution to the geopolitical tension between the US and North Korea yet. While US is calling for United Nations Security Council to vote on fresh sanctions against North Korea, it’s effectiveness is in heavy doubt. There were also fears that North Korea will launch another missile to celebrate its foundation day on September 9, that is today. Also, not long after hurricane Harvey left, another one Irma is expected to land this weekend too. Some estimated the dame of Irma to be as much as USD 200b, topping Katrina that slammed into New Orleans back in 2005.

Geopolitical tensions, Trump, and Fed uncertainty to weigh down Dollar

In addition to geopolitical tensions and hurricanes, the greenback is also weighed down by falling treasury yield and fading chance of another rate hike by Fed this year. Talking about Fed, the surprised announcement of early resignation of Fed Vice Chair Stanley Fischer also raised doubts on what the group of Fed officials would become next year. Fed Chair Janet Yellen’s term will expire next February and she could follower her closest ally Fischer and leave. It’s reported that top contender, White House economic advisor Gary Cohn, is already out of the race. So, who’s going to lead Fed next? It’s question probably US President Donald Trump cannot answer himself.

Meanwhile, Trump just signed legislation on Friday to suspend the debt limit and that would keep the government running through December 8. USD 15.25b of hurricane relief funding will also be provided. However, it should be noted that it’s a deal that was struck between Trump and Democrats. 90 Republicans have indeed voted in opposition in the House. Trump also overruled his treasury secretary, Steven Mnuchin, who’s in the middle of a proposal for long term fix to the debt ceiling problem. Mnuchin was left to explain the deal to furious House Republicans before the vote. The handling of debt ceiling issue is another indication of Trump’s disagreements with his own party Republicans. And this just add more to the doubt on whether Trump is able to push through the long awaited tax reforms and infrastructure spending.

The negative factors will continue to weigh on the greenback and any interim rebound would be temporary, until we see some fundamental changes in the situation.

So far, there is no change in the expectation that Fed is going to announce the plan to unwinding its USD 4.5T balance sheet on September 20. Comments from Fed officials last week regarding further rate hike were quite balanced. But the markets were simply getting more unconvinced Fed fund futures are now pricing in only 27.3% chance of a 25bps hike in December. A month ago, that was close to 50%.

While risk aversion dragged down Aussie and Kiwi to some extents, against other major currencies, Canadian Dollar survived and ended as the third strongest one. The loonie was given a strong boost by the surprised interest rate hike by BoC. More in BOC Surprisingly Hikes Rate For Second Consecutive Meeting. Canadian was also supported by solid employment data released on Friday. USD/CAD could be losing some downside momentum as it approaches long term fibonacci level at 1.2048. But Canadian dollar is still looking bullish against other commodity currencies. For example, AUD/CAD’s break of 0.9735 support indicates that fall from 1.0344 has resumed and deeper decline should be seen to 0.9591 support in near term at least. 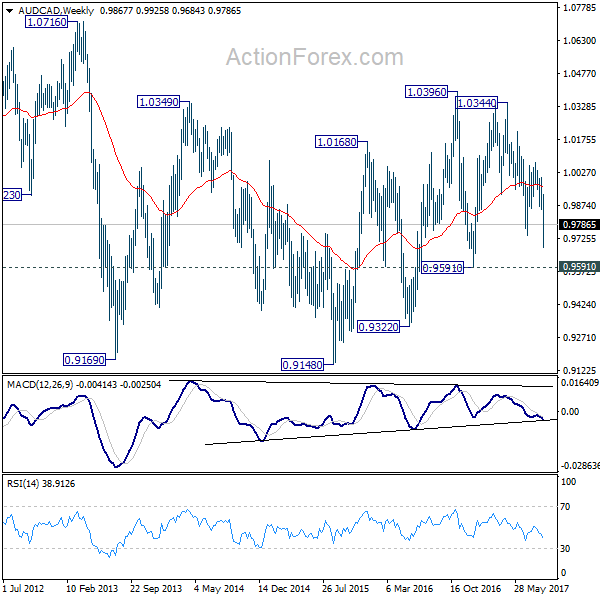 Euro was lifted against dollar last week after ECB meeting. ECB President Draghi indicated that the decision on "calibration" of the QE program will likely be made in October. More in Draghi Showed "Disaffection" Over Subdued Inflation, Admitted Discussions on QE Tapering. However, it should be noted that Euro has indeed ended the week down against, Yen, Swiss Franc, Canadian as well as Sterling. In particular, EUR/GBP’s rejection from 0.9304 key resistance will likely extend lower in near term and that would limit rally attempt in the common currency against others. 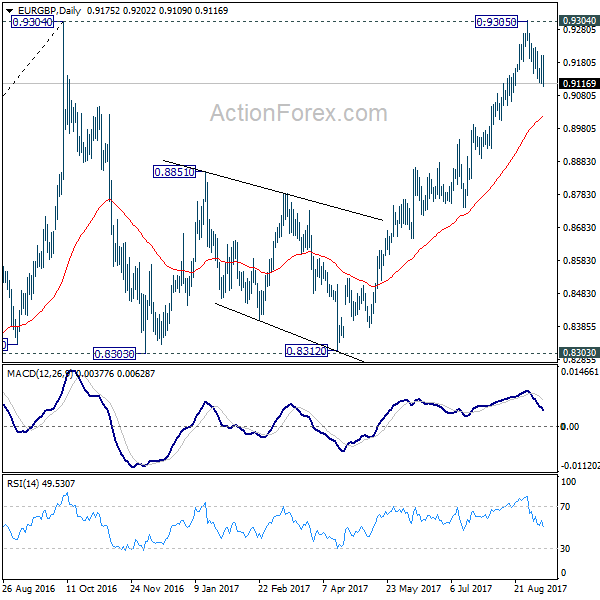 A bit week for GBP with BoE and CPI

Talking about Sterling, the upcoming week will be an important one in UK. CPI will be released on Tuesday, followed by job data on Wednesday and BoE rate decision on Thursday. There is little chance for BoE to hike interest rate this time. The focus will stay on vote splits. Hawks Michael Saunders and Ian McCafferty are staying as hawks based on recent comments. But markets would be interested to see if they change their mind if CPI data disappoints again. In addition to that, rhetorics regarding Brexit will heat up again and UK and EU officials are preparing for the fourth round of talk to start on September 18. SNB will also meet this week but we’re not expecting any surprise there.

GBP/CHF continued to engage in medium term consolidation that started back at 1.1635. It’s usually very hard to trade this kind of sideway medium to long term sideway patterns, especially during the very middle phase. For now, despite recent rebound, near term outlook stays bearish in GBP/CHF for deeper fall. The decline from 1.3067 could extend to 100% projection of 1.3067 to 1.2239 from 1.2852 at 1.2024 before completion. 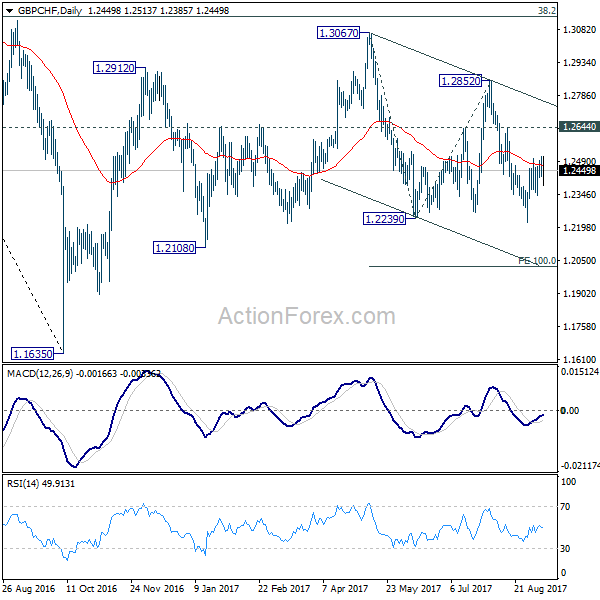 Regarding trading strategies, our EUR/USD long (bought at 1.1846) was closed at market at 1.1880 last week, making 34pts profits. That was before EUR/USD eventually surged to as high as 1.2091. While it looks a wrong decision to close that early, the concepts behind was not wrong at all. Euro has indeed ended the week mixed, as dragged down by the decline in EUR/GBP and EUR/JPY. EUR/AUD was, to a certain extent, weak, too. Nonetheless, admittedly, we didn’t expect that Dollar was that weak. Meanwhile, we bought CAD/JPY at market at 88.10 last week, but was stopped out quickly at 87.90, losing 20 pts. . Similar, not long after we’re stopped out, CAD/JPY surged to as high as 87.53.

Given that we don’t know what North Korean leader Kim Jong-Un would do in the big Foundation Day, we’ll refrain from giving any strategy first. 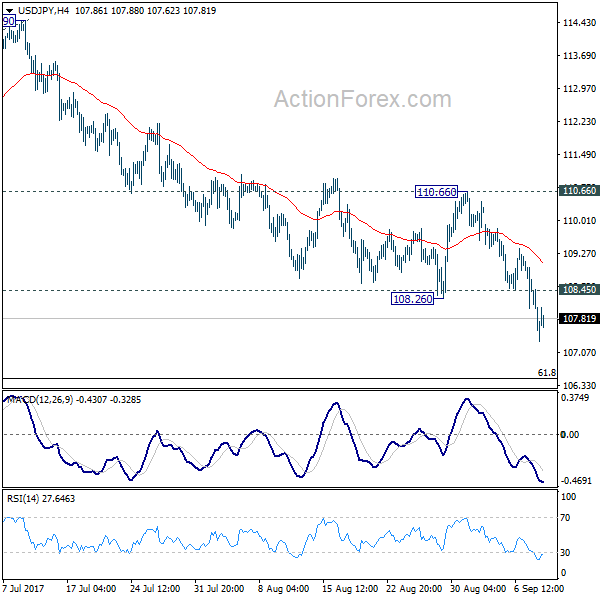 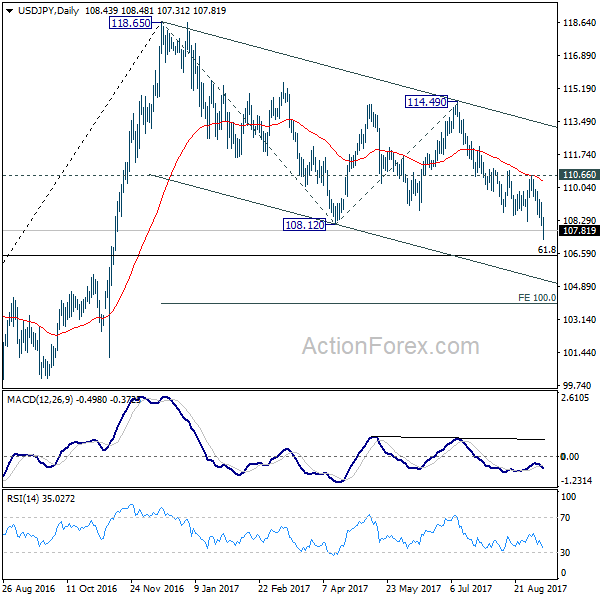 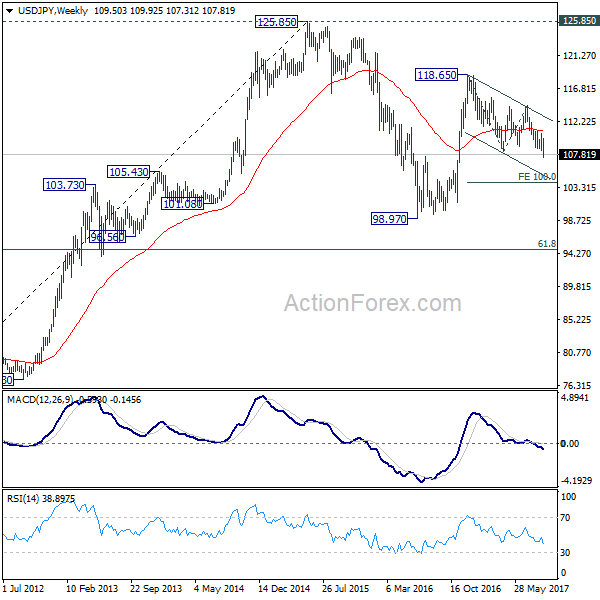 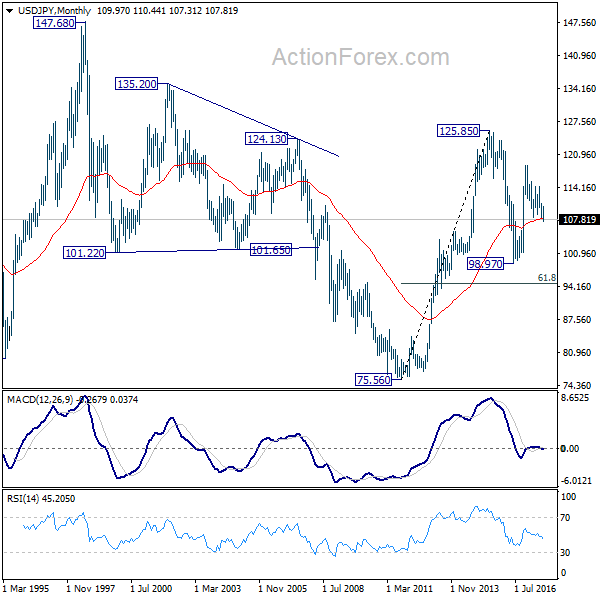