More Downside in Dollar and Yield after a Week of Volatility

There were some major surprises in the markets, much volatility and some interesting developments, last week. Dollar ended the week as the weakest major currency as markets were clearly disappointed by the outcome of the dovish FOMC rate hike. Technical developments in Dollar index and treasury yields suggest that more down would be seen in near term. There were some good reasons for Euro to surge last week. Those factors include speculations of ECB rate hike by the end of the year, as well as the Euro-friendly results of Dutch elections. But the common currency did end up as the second weakest one. In particular, the sharp pull back of EUR/CHF from as high as 1.0823 to close at 1.0718 indicates that traders are still concerned with political uncertainties ahead. On the other hand, Australian dollar ended as the strongest major currency last week in spite of weak employment data. Sterling followed as the second strongest major currency after hawkish BoE minutes. Also, FTSE 100 closed at new record high despite all the Brexit and Scexit news.

Dollar sold off on Fed disappointment

It should also be noted that Minneapolis Fed president Neel Kashkari dissented on rate hike and voted for keeping it unchanged. He explained on Friday that he’d prefer to wait until there is a detailed "balance sheet plan" before raising interest rate. He noted that shrinking the balance sheet would "trigger somewhat tighter monetary conditions." And, "after it has been published and the market response is understood, we can return to using the federal funds rate as our primary policy tool, with the balance sheet normalization under way in the background." This balance sheet normalization first, rate hike later approach is clearly different from Fed chair Janet Yellen’s and some other members’, for the moment. But more policy makers could lean towards this approach after the federal fund rate is raised a few more times.

Another thing to note is that Fed was clear that fiscal policies, with the lack of details, are not being considered in latest economic projections. Dollar bulls would likely need to at least see that realized in the projections before commiting more on the greenback’s up trend. But it would probably take some more time for US president Donald Trump to move his focuses back from travel ban and military spending into things like tax reforms and others.

TNX’s rejection from 2.621 resistance suggests short term topping again. There are two main interpretations of the price actions. Firstly, consolidation from 2.621 is extending with fall from 2.615 as the third leg. Secondly, rise from 2.314 to 2.615 is a failure fifth that ends the whole impulsive rally from 1.336. In both cases, TNX should now head to 55 day EMA at 2.435 and sustained break will target 2.314 and below. But still, in both cases, we’d expect strong support from around 38.2% retracement of 1.336 to 2.621 at 2.130 to contain downside and bring up trend resumption. This is in line with the outlook in dollar index.

To the market’s surprises BoE MPC member Kristin Forbes voted in favor of a 25 bps rate hike last week. While this had not altered the decision of keeping the Bank rate unchanged at 0.25%, the overall message sent to the public has now become more hawkish. The members voted unanimously to leave the government bond purchases at 435B pound and corporate bond purchases at up to 10B pound. Adding to the rising speculations of tightening is the minutes, which suggested that some of those who voted for unchanged policy believed ‘it would take relatively little further upside news on the prospects for activity or inflation for them to consider that a more immediate reduction in policy support might be warranted’. More in Forbes’ Dissent Would Unlikely Speed Up BOE’s Rate Hike Schedule.

The interesting development is that FTSE 100 surged to new record high and closed strongly at 7424.96 last week. It should be noted that it came with speculation of rate hike by early next year and rebound in Sterling in the background. And UK prime minister Theresa May has cleared the way to trigger Article 50 for Brexit later in the month. And Scotland is calling for another independence referendum after Brexit agreement is settled. The strength in UK stocks is indeed a statement. The coming weeks will be important to seen if both Sterling and stock could remain in sync to move higher.

Aussie to look at China stocks for guidance

The Australian dollar outperformed other major currencies last week despite disappointing employment data. The diminishing chance of another rate cut by RBA is seen as a factor as the housing markets were heating up again in recent months. Two major Australian banks, NAB and Westpac has hiked mortgage rates this month blaming surging wholesale funding costs. Meanwhile, developments in China could be another factor favoring Aussie. China’s PBoC raised key short term repo rate and medium term MLF rate last week. PBoC said that the hikes doesn’t constitute a benchmark rate increase. But some analysts said that’s a sign of acceleration in tightening. The SSE composite jumped to as high as 3274.19 before reversing sharply on Friday. It remains to be seen if the index can take out key medium term resistance at 3301.21. That could be another factor in deciding Aussie’s fate.

To sell USD/JPY this week

Regarding trading strategies, our EUR/AUD long, entered at 1.3900, was stopped out at 1.4000 with 100 pips profit last week due to the deeper than expected pull back from 1.4183. The development dampened our bullish view of medium term trend reversal and we will move away from the cross first. We bought USD/JPY at 114.00 last week but that was quickly stopped out at 113.50 as Fed disappointed the markets. As noted above, we’re expecting near term weakness in both Dollar and treasury yields. That makes selling USD/JPY a choice to ride on the developments. Hence, we will send USD/JPY on recovery to 113.50 this week, with stop at 114.50. We’d expect a test on 111.12/13 as the whole fall from 118.65 resumes.

USD/JPY’s fall from 115.49 accelerated last week and the development invalidated our original bullish view. Instead, it suggests that price action from 111.58 are a consolidation pattern and is completed with three waves to 115.49. And the corrective decline from 118.65 is resuming. 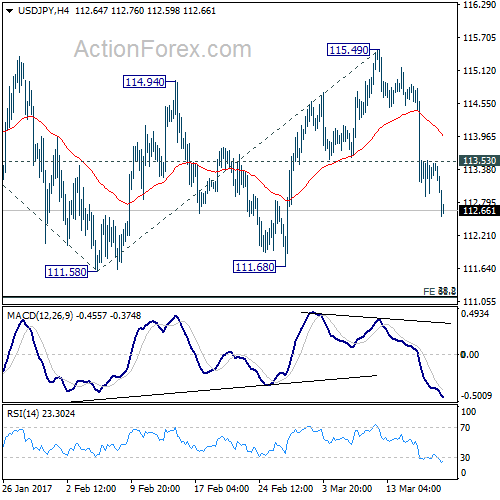 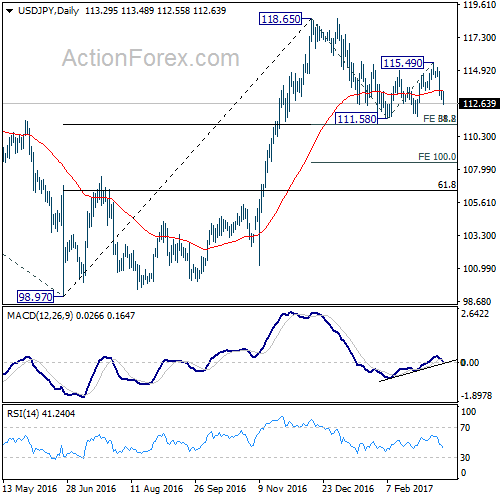 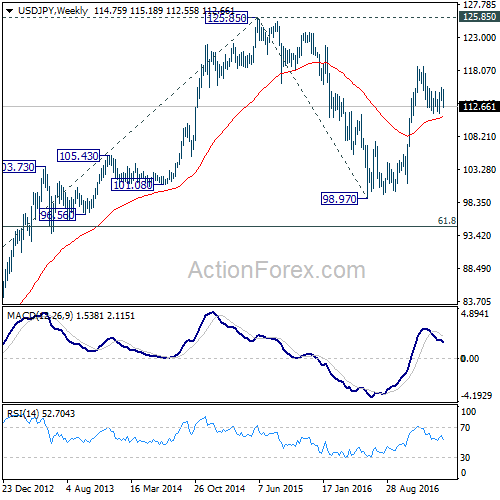 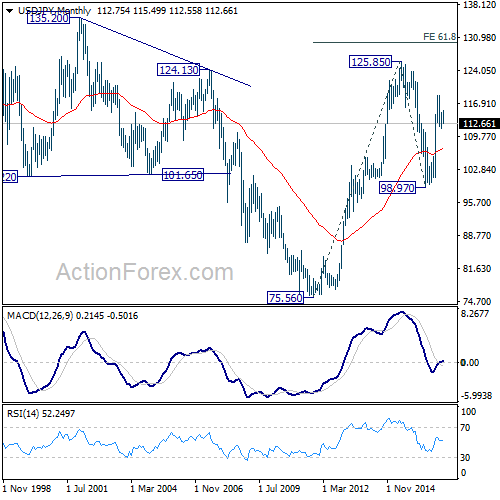