According to the Bank for International Settlement Triennial Central Bank Survey (BIS), the Foreign Exchange market (or FX or forex market) is the largest and most liquid in the world with a global turnover measuring $5.1 trillion per day in 2016.

As disclosed in the table below (courtesy of BIS), foreign exchange swap transactions cleared an impressive turnover of more than $2.3 trillion per day in 2016, trailed reasonably close by foreign exchange spot transactions at more than $1.6 trillion per day. Spot market trading activity actually fell by 19% in April 2016. This is the first time since 2001 spot turnover has decreased.

The FX market is, in effect, a global auction house for currency transactions, determining the relative value of currencies. Unlike other financial markets the FX market is decentralised – an over-the-counter market – meaning no central location or formal exchanges exist.

According to BIS, turnover by currencies shows the US dollar remains the world’s dominant vehicle currency. It was on one side of 88% of all trades in April 2016, up slightly from 87% in April 2013. 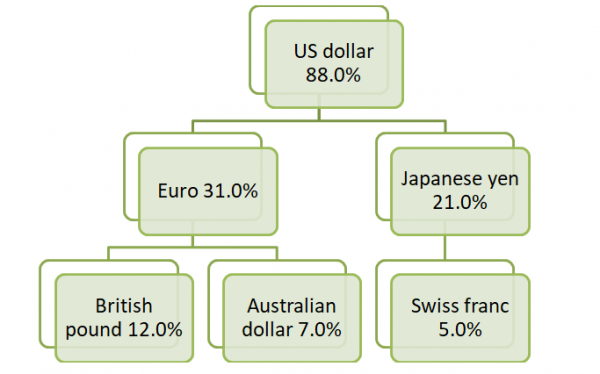 No matter which trading style you employ, familiarising yourself with some of the market’s G10 currencies (ten of the most heavily traded and liquid currencies in the world) is imperative.

Distributed by the Federal Reserve, regularly titled ‘the Fed’, the US dollar is the official currency of the United States of America.

Typically referred to as the ‘greenback’ or ‘buck’, the US dollar snatches the lion’s share in terms of daily volume in the FX market. The dollar is called greenback as the paper notes issued during the American civil war in 1861 had a distinctive green colouring on the back. The exact origin of the term buck isn’t clear, though strong evidence indicates people began calling dollars bucks in the 18th century thanks to deer, specifically with the trading of deerskins.

Long-term government stability, the world’s largest economy, and a power house in international trade, contributes to the dollar’s popularity. In addition to this, the US dollar is the world’s primary reserve currency, valued at approximately 63% of currency reserves, according to IMF figures.

Another interesting point is the greenback’s connection to commodities. The US dollar is influenced by demand for commodities as many are denominated in dollars. This indicates commodities are subject to not only market supply and demand but also to the relative value of the US dollar. As a result, should the value of the dollar decline, it’ll cost investors more dollars to purchase commodities, and vice versa.

Major currency pairs (all foreign exchange trades involve purchasing one currency and selling, hence the term ‘currency pair’) to keep an eye on containing the greenback are the EUR/USD, USD/JPY, GBP/USD, AUD/USD, USD/CHF and USD/CAD.

It is also worth observing the US dollar index. The index factors in the exchange rates of six major G10 currencies. Over half of the index’s value is represented by the dollar’s value measured against the euro. The additional five currencies consist of the Japanese yen, the British pound, the Canadian dollar, the Swedish krona and the Swiss franc. One use of this index is deciphering USD positioning across neighbouring currencies as a base for correlations. As an example, say the US dollar index is trading from demand (a form of technical analysis by way of price action) and the EUR/USD from supply, the odds of price turning lower from the said supply increases.

Issued by the European Central Bank, or more commonly referred to as the ‘ECB’, the euro is the second most traded currency worldwide. The euro, also known as either the ‘single’ or ‘shared’ currency is the official legal tender of 19 of the 28 member states of the European Union (EU). This group of states is known as the Eurozone or euro area, and holds approximately 340 million citizens as of 2019.

The popularity of the euro is primarily down to the scale and economic clout of the area it’s used: the Eurozone. The euro’s value is strongly influenced by political and economic developments.

Decisions regarding interest rates made by central banks tend to have a significant impact on their respective currencies. Inflation is another key factor affecting all currencies, including the euro. The key measure of inflation in the Eurozone is the Consumer Price Index (CPI).

Major currency pairs containing the euro to watch are the EUR/USD, EUR/JPY and EUR/GBP.

Headquartered in the heart of Tokyo, the Bank of Japan (BoJ) is responsible for issuing yen, implementing monetary policy and maintaining the stability of the Japanese financial system. The yen’s value is highly dependent on the strength of Japan’s economy, particularly its manufacturing sector. In many respects, international trade is the lifeblood of Japan’s economy.

While the Yen serves as the official currency of Japan, it is also Asia’s most traded currency. Many foreign exchange traders pay attention to economic releases out of Japan, including, but certainly not limited to, BoJ meets and announcements, industrial production figures, unemployment data and GDP numbers.

It might also interest some traders to note the Japanese yen, the third most traded currency in the FX market, and Swiss franc tend to serve well as safe-haven currencies in times of economic uncertainty. This is attributed to the fact Japan is one of the world’s largest exporters, in dollar terms. Japan has always been a large exporter and has continually exported significantly more goods and services than it imports. The result has been decades of current account surpluses, positioning the country as a net creditor to the world.

Major currency pairs containing the Japanese yen to watch are the USD/JPY, EUR/JPY and GBP/JPY.

For more than 300 years the Bank of England (BoE) has been the authority issuing British pound banknotes.

Also known as ‘pound sterling’ or ’cable’ (pound coins originally weighed one troy pound of sterling silver, giving the currency the name pound sterling – cable is also a popular nickname for the GBP/USD currency pair [the term dates back as far as the 19th century, when transactions between the British pound and the US dollar were implemented through the transatlantic cable]).

Foreign exchange traders often base the pound’s value, the fourth most traded currency in the FX market, on the overall strength of the British economy and political stability of its government. Central bank monetary policies, employment and GDP releases, among other reports, tend to have a marked effect on the direction the pound takes.

Across the board, sterling’s value has significantly declined of late, affected by the country electing to exit the European Union (EU) on March 2019, creating a somewhat divided country between those who wish to remain in the EU and those who want to exit.

Major currency pairs containing the British pound are the GBP/USD, GBP/JPY and the EUR/GBP.

The Australian dollar, often labelled as a commodity-linked currency due to its relationship with China’s movement (China is Australia’s largest trading partner, in both exports and imports while Australia is China’s sixth-largest merchandise trading partner) and the commodity markets (behind China, Australia is the world’s largest producer of gold and therefore has a positive correlation with the precious metal. So when gold prices rise, the Australian dollar typically finds support and appreciates as well), is the currency of the Commonwealth of Australia.

Issued by the Reserve Bank of Australia and representing the fifth most traded currency in the foreign exchange markets, the Aussie dollar often reacts to both local macroeconomic events and those released out of China for reasons briefly highlighted above.

Major currency pairs containing the Australian dollar are the AUD/USD and AUD/JPY.

The official currency of Switzerland and the sixth most traded currency in the FX market.

Switzerland’s reputation for financial services and relatively sound monetary policies has made the Swiss franc a ‘safe-haven’ currency, also known as the ‘’Swissie’ among the financial community. The country has a low rate of inflation and people have confidence in the Swiss National Bank (the Swiss National Bank has the exclusive right to issue banknotes in Switzerland). The Swiss franc, similar to the Japanese yen, typically advances to higher ground in times of global economic uncertainty.

An important inverse correlation to keep an eye on is between the EUR/USD and the USD/CHF currency pairs. This can help traders pin down potential reversals using a myriad of trading strategies. For example, price trading at support on the EUR/USD coupled with a similar scenario present on the USD/CHF from resistance, adds weight to a move being seen in both markets.

Major currency pairs containing the Swiss franc are the USD/CHF, EUR/CHF and CHF/JPY.

As demonstrated above, each currency has specific traits. While it is beyond the scope of an article to list all the currency pair’s twists and oddities, the piece has hopefully provided traders a foundation to expand one’s knowledge in the foreign exchange market.