GBP/NZD is the biggest mover today as Sterling suffered renewed selling. On the other hand, Kiwi and Aussie remain firm despite rally in Dollar.

Nevertheless, GBP/NZD is staying above 1.8659 support despite today’s fall. It’s technically staying in consolidation and more sideway trading could be seen. But even in case of another recovery, upside should be limited by 1.9282 resistance to bring fall resumption. 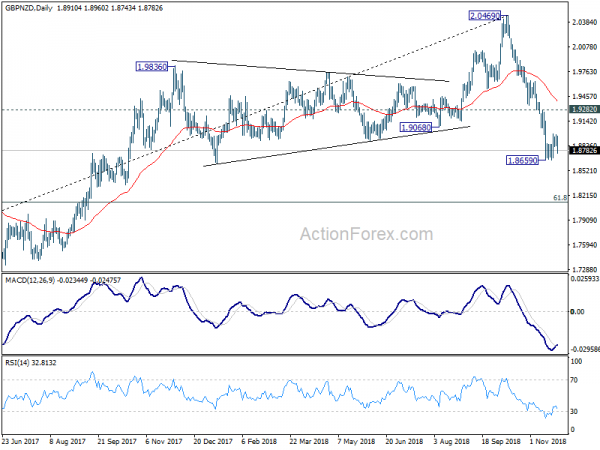 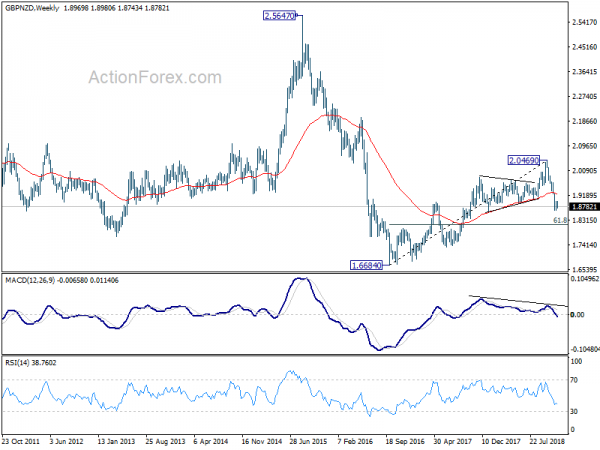 ECB: PEPP to be conducted at significantly higher pace over the next quarter

ECB said it expected the purchases under the pandemic emergency purchase programme (PEPP) to be conducted at a “significantly higher pace” over the next quarter. Though, the total envelop will be left unchanged at EUR 1850B, and the program will continue until at least end of March 2022.

The Governing Council will purchase flexibly according to market conditions and with a view to “preventing a tightening of financing conditions”. The total envelop can be “recalibrated if required”,  to maintain favourable financing conditions to help counter the negative pandemic shock to the path of inflation.

Main refinancing rate is kept at 0.00%. Marginal lending rate and deposit rate are held at 0.25% and -0.50% respectively. Interest are expected to “remain at their present or lower levels” until inflation outlook robustly converges to target within its horizon.

Fed Daly: The case for 50bps hike has grown

San Francisco Fed President Mary Daly told FT, the case for 50bps rate hike in May has grown. “The case for 50, barring any negative surprise between now and the next meeting, has grown,” she said. “I’m more confident that taking these early adjustments would be appropriate.”

Daly noted the US labor market was “very strong” and “tight to an unsustainable level”. “If you want a job in the United States, you can get one and you can probably get multiple jobs at this point,” she said. “If you’re an employer looking for workers, it’s hard to both hire them and retain them.”

“The economic recovery is progressing. Although the ZEW Indicator of Economic Sentiment has experienced a drop in June, it remains at a very high level. The decline in expectations is probably largely due to the considerably better assessment of the economic situation, which is now back at pre-crisis levels. The financial market experts therefore continue to expect a strong economic recovery for the next six months,” comments ZEW President Professor Achim Wambach on current expectations. 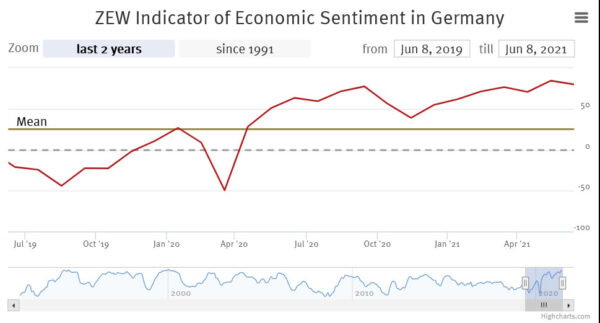 Sterling falls broadly ahead of next UK Conservative leadership voting

Sterling drops broadly this week breaking out near term support against Dollar and Yen. The next round of UK Conservative leadership voting will be held today. For now, despite the lack of public appearances, face of the Brexit campaign Boris Johnson appears to be unstoppable. Jeremy Hunt and Michael Gove are believed to have secured enough votes for the next round. Meanwhile, Sajid Javid, Rory Stewart and Dominic Raab are still battling for support. Those staying in the race after current around will compete in a BBC debate later in the evening. That would likely be Johnson’s first TV appearance since the race started. Pound is also weighed down by news that Chancellor of Exchequer Philip Hammond is “prepared to resign” over Prime Minister Theresa May’s legacy spending plans. 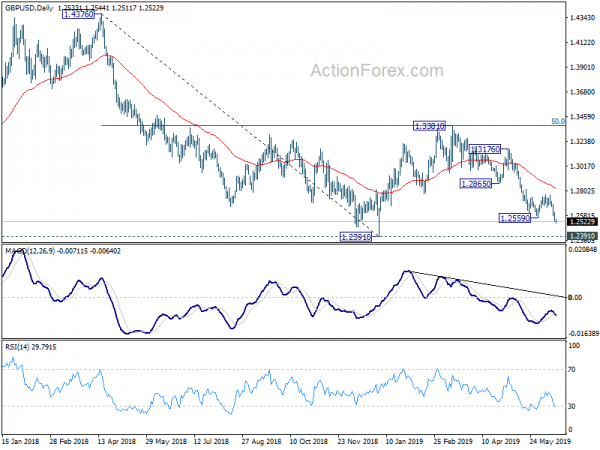 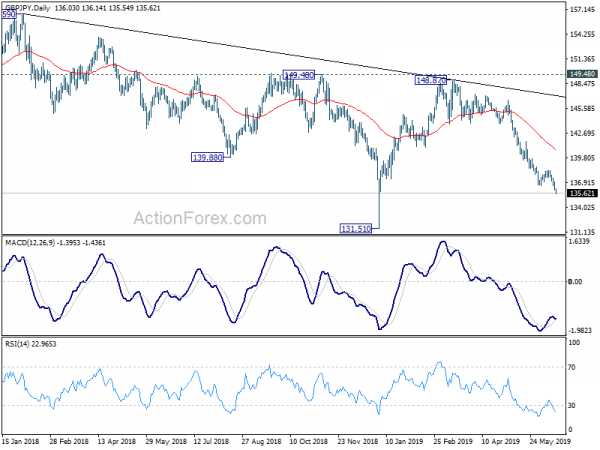 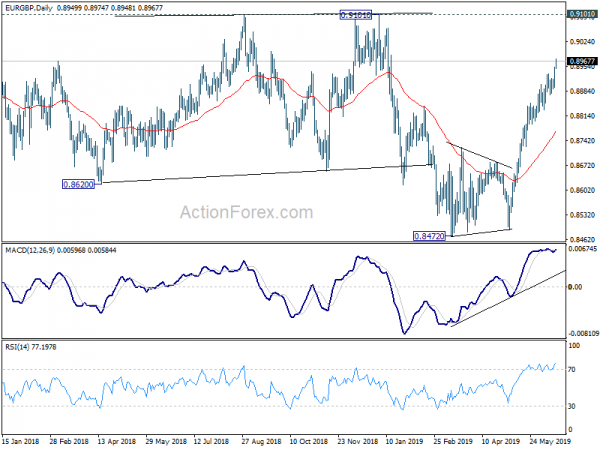 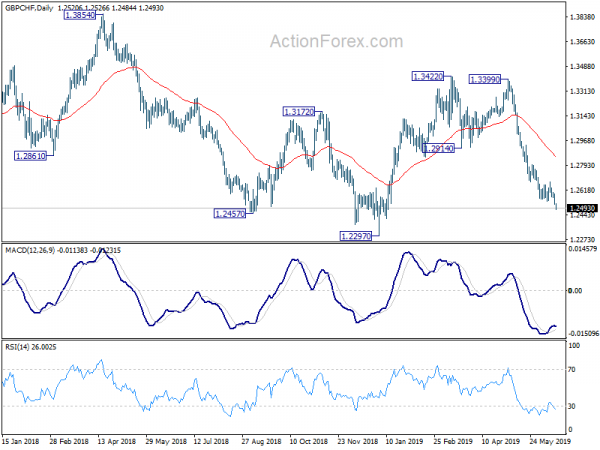 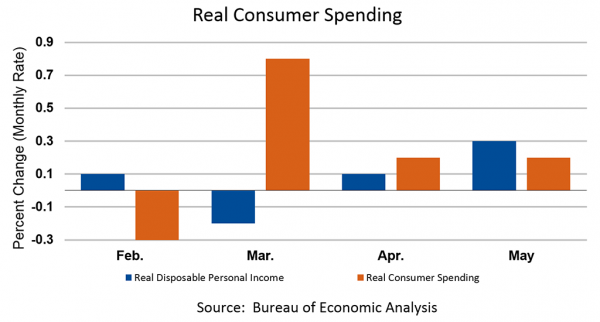 RBNZ survey: Another rate hike expected in Q1, 4-5 hikes in a year

In the latest Survey of Expectations of RBNZ, OCR expectations continued to rise in the short, medium and long term. OCR is expected to rise from current 0.75% to 1.05% by the end of Q1. Mean estimate for OCR for one year ahead was 2.11%, indicating four to five 25bps hikes. Mean two-year ahead OCR expectations were at 2.47% 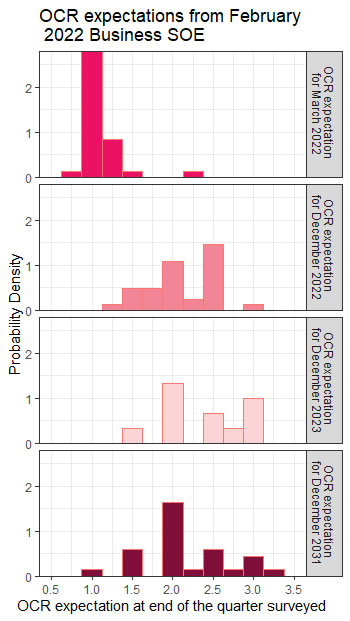 US bans travelers from Europe for 30 days, excluding goods

US President Donald Trump announced a ban on travelers to the US from Europe for 30 days, in a step to slow down the spread of coronavirus pandemic. The ban would apply to countries in the Schengen economic and travel zone, while UK and Ireland would be exempted. Also, goods are not included in the ban.

Trump said he would ask Congress for legislative action for measures to counter the economic impact of the coronavirus, including payroll tax relief. The Small Business Administration is also instructed to provide capital and liquidity to companies in need.

Separately, NBA said it will suspend its season after a played was tested positive for the coronavirus. Famous action Tom Hanks has been tested positive too while he’s in Australia. Total cases in the US surged to 1322, with 38 deaths, as of the time of writing.

Japan’s corporate goods price index dropped further to -0.8% yoy in September, down from -0.6% yoy, missed expectation of -0.5% yoy. Wholesales prices also dropped -0.1% mom, indicating risk of upstream deflation. “With the global economy still reeling from the pandemic’s pain, the pace of its recovery remains modest. That will weigh on Japan’s wholesale inflation,” a BOJ official told a briefing.

Tokyo raised coronavirus alert to the highest level today, as new daily cases hit record high above 500. Governor Yuriko Koike said the government would would take steps to combat the coronavirus “with the view that infections could reach 1,000 cases a day”.

Prim Minister Yoshihide Suga also urged citizens “once again to be vigilant about taking basic precautions… “We ask that people engage in quiet, masked, dining. I will do the same starting today,”

Dollar stays generally weak in Asian session and extends Monday’s selloff, on Trump’s attack on Fed. In a Reuters interview, Trump reiterated his comments last month that “I’m not thrilled with his raising of interest rates, no. I’m not thrilled,” referring to Fed Chair Jerome Powell.

He complained the the US is not getting any support from the Fed during his negotiation with other countries. Trump noted, “we’re negotiating very powerfully and strongly with other nations. We’re going to win. But during this period of time I should be given some help by the Fed. The other countries are accommodated.”

Trump also fingered pointed Eurozone and China for currency manipulation to give them an advantage over the US on trade. He said . “I think China’s manipulating their currency, absolutely. And I think the euro is being manipulated also.”

NAB said: “The continuing lockdown in NSW and the briefer periods of disruption across a number of other states saw a further deterioration in activity in the business sector in July… Confidence took a big hit in the month with optimism collapsing on the back of ongoing restrictions.”

“It is now widely expected that we will see a negative print for GDP in Q3. However, we know that once restrictions are removed that the economy has tended to rebound relatively quickly. We will continue to track the survey very closely for an indication of just how quickly that happens – particularly forward orders and capacity utilisation as we assess how the disruption has fed into expansion plans as conditions bounce back” 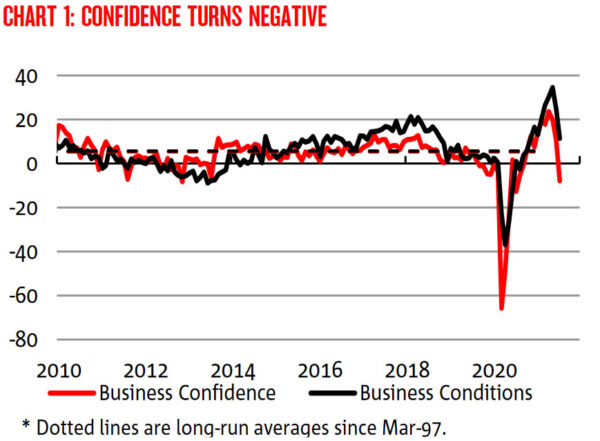 Swiss KOF Economic Barometer dropped slightly from 111.0 to 110.7 in October, better than expectation of 108.0. KOF said: “Indicator bundles of the food and beverage industry have improved clearly and are contrasted by declines in indicator bundles of manufacturing, the economic sector other services, foreign demand and the financial and insurance services, resulting in an almost unchanged overall movement.” 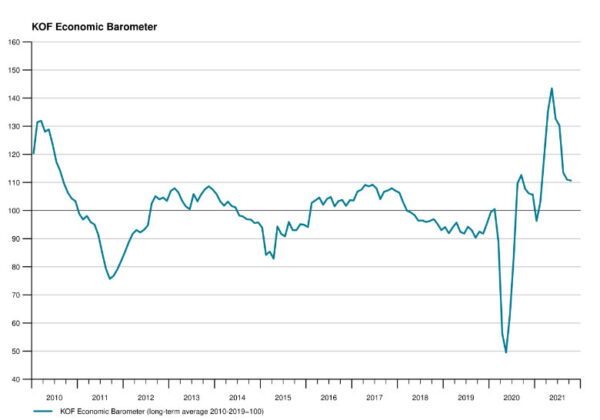 UK PMI Manufacturing was finalized at 46.2 in October, down from September’s 48.4. That’s the lowest level in 29 months, and the reading has been below 50 mark for three consecutive months.

Rob Dobson, Director at S&P Global Market Intelligence, said: “UK manufacturing production suffered a further decline at the start of the fourth quarter, with the sector buffeted by weak demand, high inflation, supply-chain constraints and heightened political and economic uncertainties…. The darkening situation also knocked business optimism down to a two-and-a-half year low… On current form manufacturing is in no position to help prevent the broader UK economy from sliding into recession.” 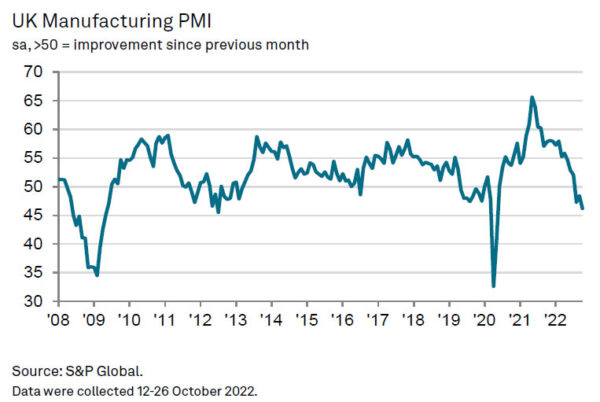 Canadian Prime Minister Justin Trudeau also expressed his optimism regarding NAFT renegotiation. He told reports that “we have a high chance of reaching a win-win-win deal for Canada, the United States and Mexico.”

And, “with the pressures of the elections in Mexico, and the U.S. elections, if we could announce something at the Summit of the Americas, that would be great.”

That is the April 13-14 summit of regional leaders of the Americans in Peru. And it’s rumored that there will be at least a symbolic NAFTA agreement reached for announcement during the summit.

Yen remains the strongest one today, followed by Swiss Franc as risk aversion dominate. Euro is suffering the worst selling as the eye of the storm lies in Italy. Australian and New Zealand Dollar follow as the weakest.

OECD raises global growth forecast to 5.8% this year, but this is no ordinary recovery

In the new economic outlook report, OECD raised global economic growth forecast to 5.8% this year, a “sharp upwards revision” from December’s projection of 4.2%. It said that “vaccines rollout in many of the advanced economies has been driving the improvement, as has the massive fiscal stimulus by the United States”. Growth is projected to slow to 4.4% next year.

The organization warned that this is “no ordinary recovery” and is likely to “remain uneven and dependent on the effectiveness of vaccination programmes and public health policies.” Some countries like Korea and US are ” reaching pre-pandemic per capita income levels after about 18 months”. But, “much of Europe is expected to take nearly 3 years to recover”. Mexico and South Africa would take between 3 and 5 years.

New Zealand employment rose 0.6% qoq in Q1, in line with expectation. Unemployment rate dropped to 4.4%, below expectation of 4.5%. That’s also the fifth consecutive quarter of decline in unemployment rate, and it hit lowest level since December 2008.

In addition, the underutilization rate dropped to 11.9%, down from 12.2%. That reflects 9200 fewer people are were underemployed. Labour force participation rate dropped 0.1% to 70.8%. Employment rate was unchanged at 67.7%.

Below is a video explanation by Stats NZ on the data.

Here is the full release

Average hourly earnings rose 0.1% mom only, below expectation of 0.2% mom.

Notable buying is seen in the Japan yen after the report, with USD/JPY driving to as low as 108.65 so far. But Dollar is steady against Euro, Swiss, Sterling, Aussie and Canadian, in tight range.