The longer-term outlook is that the Euro remains undervalued against the Dollar at its current level of around 1.15 at time of writing, and that these remain attractive valuations to consider purchasing the EU currency in the long run. However, investors want clear guidance from the European Central Bank (ECB) on when it will potentially raise EU interest rates to pull the trigger on a potential EURUSD rally.With the ECB more likely than not going to mirror memories of previous Federal Reserve Chair Janet Yellen and the Fed from 2015 by taking as much time as possible before finally raising interest rates, this is going to make investors hesitant to jump on potential EURUSD trade for a while yet.

I personally do not think the ECB and President Mario Draghi will be in a confident enough position to prepare investors for an eventual increase in EU interest rates until the end of the year, at the earliest. Expectations that the ECB will be lifting interest rates away from their record low levels by the second half of 2019 are premature as they stand. An increase in EU interest rates as we edge closer to the end of the current decade is by far the more likely scenario. This ultimately means that investors might not be prepared to consider adding material Euro purchasing positions into their portfolios until the end of the year, at least when it comes to optimism over ECB monetary policy.

Downside risk for the Euro over the rise of populist parties in Europe and headlines over the financial health of Italy will remain, but these are also not new headlines and are something that investors will need to closely monitor instead.

With it in mind that the ECB will be taking all the time it needs before providing confident signals that policymakers will be ready to raise interest rates before the end of 2019, investors will likely be looking for rounds of weakness in the USD for a jump in the Euro. This is exactly where matters get interesting for Euro bulls, because there are reasons to carry a negative view on the Greenback heading into Q4.

U.S. interest rate expectations for at least the remainder of 2018 have been priced into the U.S. Dollar a long time ago. This weakens the monetary policy divergence that contributed to the EURUSD decline earlier this year. When you also consider the likelihood of the Trump Administration stepping up the narrative on the Greenback being too strong along with comments on U.S. monetary policy from Trump – you do have reasons to develop a negative view on the Greenback.

There are alsothe massive US mid-term elections in early November that will easily be seen as the biggest political risk event for financial markets in 2018,which supports the Euro outperforming expectations if the Greenback declines on election uncertainty. Investors do not appear to have yet factored inU.S. mid-term elections into valuations, and there might be a frantic frenzy of profit-taking on the Greenback around the November event.

We have seen time and time again in the past how suddenly the Euro can rally to the upside when there is a round of investors unwinding USD positions.This is why we can’t rule out a potential EURUSD recovery before the end of the year.

The current technical outlook in the Eurodollar suggests that the pair is facing a wall of technical resistance at 1.18, and the EURUSD will need to push above this level on at least a weekly basis for investors to price in a return to 1.20 in the Euro. 1.13/1.14 looks like a potential psychological bottom in the Eurodollar over the medium term and it would probably require intense concerns over the health of the financial system in Italy to push the Euro lower than this.

Ultimately what investors might be more encouraged to consider is temptation to buy the Euro on dips.This is overall probably the most difficult outlook to provide for the final quarter, but if I were to pick a side then I would favour the longer-term view that the Euro should beappropriately valued much higher than its current levels. 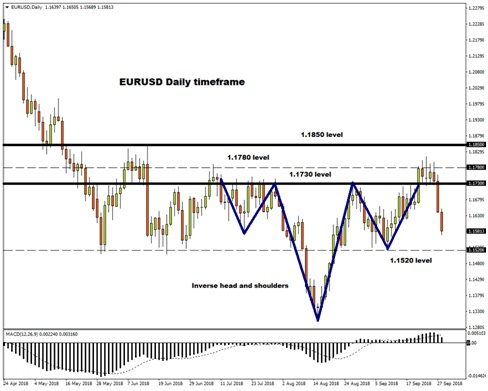 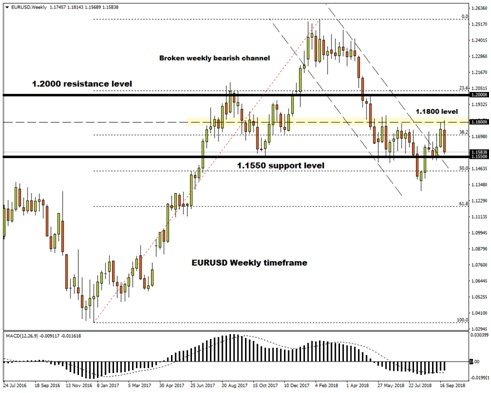 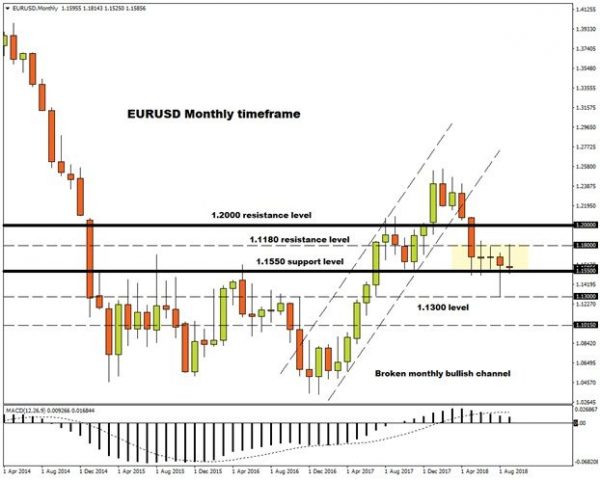