Today late in the American session (18:00,GMT), FOMC’s interest rate decision will be released. The bank is expected to remain on hold at +2.50% and currently Feds Funds Futures (FFF) imply a probability of 79.1% for the bank to do so, with the rest favoring a rate cut. Please bear in mind that the meeting is also to produce the bank’s new dot plot, the new economic projection and the accompanying statement. Given that the Fed Chair Powell, has recently switched his usual line about the bank being “patient” in favor of “acting appropriately”, we could see a similar switch in the accompanying statement. An additional dovish element could be the possible lowering of the bank’s projections as well as a lowering of the expectations of the Fed’s members about bank’s interest rate. It should be noted though, that a number of analysts maintain the view that the US financial data do not yet suggest a rate cut in the near future, in contrast with what the market expects. We maintain a base scenario of the bank remaining on hold and sounding a bit dovish in order to keep the door open for a possible rate cut in the future. Also, please be advised that volatility for USD pairs could be extended during Fed’s Chair Powell’s press conference later on. EUR/USD dropped yesterday, breaking the 1.1220 (R1) support line (now turned to resistance), as the common currency weakened after ECB Presidents dovish comments. Technically, we expect the pair to maintain a course south, as long as it remains under the downward trendline incepted since the 12th of June. Should the bears maintain control over the pair’s direction, we could see it breaking the 1.1175 (S1) and aim for the 1.1125 (S2) support level. Should the bulls take over, we could see the pair breaking the 1.1220 (R1) resistance line and aim for the 1.1260 (R2) resistance hurdle.

Tomorrow during the late Asian session, BoJ’s interest rate decision is to be announced and the bank is widely expected to remain on hold at -0.10%. Currently JPY OIS imply a probability of 90.14% for the bank to remain on hold and if so, we could see the accompanying statement gathering the market’s attention. Given the recent statement of BoJ Governor Kuroda, that the bank has further room to support the economy, we see risks skewed to the dovish side for the bank’s accompanying statement. We could see the JPY weakening on the announcement especially if the bank decides to provide further details on what form this support could take. Also, please be advised that volatility for JPY pairs could be extended during BoJ Governor Kuroda’s press conference later on. USD/JPY maintained a range bound movement yesterday, unable to clearly break above the 108.50 (R1) resistance line. We could see the pair maintaining its current movement, yet one must note that the volatility, which could be provided by the two interest rate decisions (FOMC and BoJ), could alter the pair’s direction. Should the pair come under the selling interest of the market, we could see it breaking the 107.90 (S1) support line and aim for the 107.20 (S2) support barrier. Should the pair’s long positions be favored by the market, we could see it clearly breaking the 108.50 (R1) resistance line and aim for the 109.15 (R2) resistance hurdle. 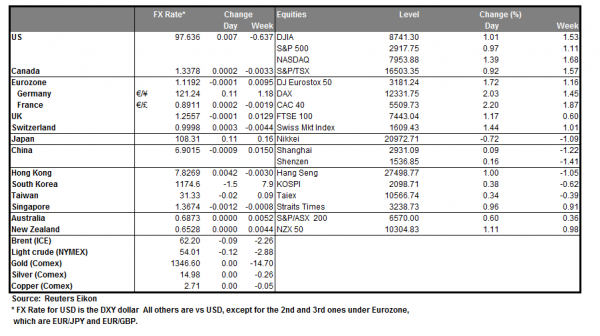