The shine is back for the precious metal which is trading up nearly 11.4 percent year to date. Most of these gains have occurred fairly recently, precisely speaking, the price started to rally on May 30th. Since then, the price is up nearly 12.87 percent. It is set to record the best monthly gain of 9.49 percent since February 2016. 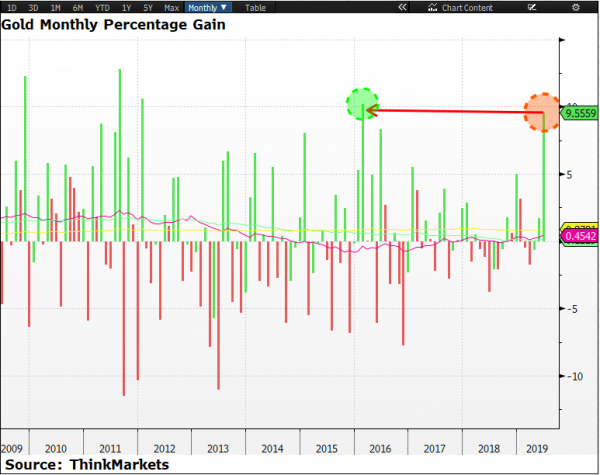 Let’s start with the monetary policy first, the dollar index is set to record the biggest monthly loss since 2018. The dollar index, DXY, is down nearly -1.85 percent this month, and this weakness in the in the dollar index has given birth to the bull rally for the shining metal. Investors have been largely worried that the US economy may fall into a recession and economic data started to support this argument to some extent. It was only fairly recently, when the Federal Reserve actually admitted that the trade war between the US and China has started to weigh on the economic health of the country. As a result, the Fed has decided that they need to move the needle on the monetary policy.

What is fairly priced into the market (with respect to the dollar index and the gold price) is that the Fed is going to cut the interest rate by 25 basis point. However, the speculators are not willing to believe this, in their opinion, the Fed is likely to cut the interest rate by at least 50 basis point. Four days ago, in our analysis, when the price was trading below $1350, we discussed that the price is likely to go above the level of $1,400 because of the change in the Fed’s monetary policy stance. Since then the price has gained more than 7.29 percent and it is trading at $1,430.

Another reason for the gold price to move higher is the heightened geopolitical uncertainty in the Middle East. The recent conflict overshooting the US drone in Iranian territory, according to Iranian officials, has escalated the tensions between the US and Iran. for the first time, the trump administration has taken a more sensible approach and adopted the approach off sanctions rather than military actions on Iran. Nonetheless, it is not to say that this hasn’t made the situation more complicated in the most sensitive area the world. Iran has said at the door is shut for any diplomatic path and this means the uncertainty well continue to rise. This is likely to keep pushing the gold price higher and it can easily cross the level of $1,500.

An important factor which investors should be paying attention to is the correlation between the gold price and the size of the negative-yield debt. The chart below shows that there is a strong correlation which means that the gold price rises as the size of the negative yield debt increases. This makes perfect sense, of course, no one likes to have negative yield debt. The safer bet is the shining metal. Given the current monetary policy adopted by the European Central Bank and the Federal Reserve bank, it is likely that the gold price may actually touch 1550 in the next few months. 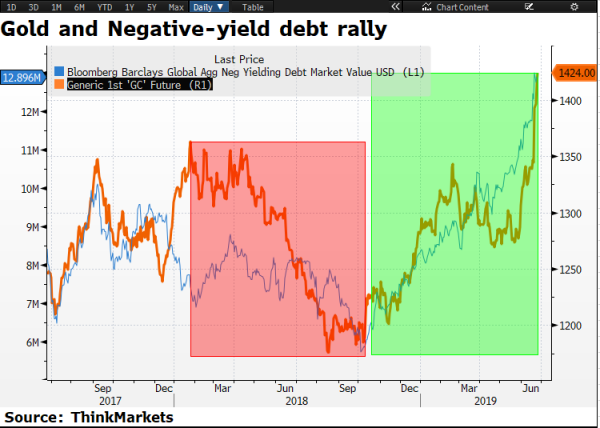 However, it is important to keep in mind that the default numbers are still fairly under control or In other words, fairly low which means that the economic situation isn’t really dire. Moreover, the earning season is also around the corner and any substantial weakness in the dollar index should help the corporate earnings unless the bigger picture makes it look dull.

To conclude, the upcoming G-20 meeting, the Fed’s monetary policy, the trade war between the US and China and the heightened geopolitical uncertainty over in the Middle East may continue to support the price of gold. For the time being, the bias is skewed to the upside for the gold price

US: Manufacturing Sentiment Falls as COVID-19 Starts to Bite

New Quarter Yet to Provide Sunshine of Hope for Global Markets

US ADP employment dropped only -27k, but coronavirus impact not fully reflected