WTI oil futures for August delivery are moving sideways below the 50.0% Fibonacci mark of the 66.60 – 50.60 downleg near 58.58 but hover above the 20-period simple moving average (SMA) in the 4-hour chart. The RSI and the MACD are losing steam as both are falling in the positive area.

If the market proves overbought, the price could reverse south to retest the 38.2% Fibonacci of 56.70. Lower, the 40-period SMA would be the next target around 55.30 before a bigger battle starts around the 54.85 barrier.

However, buyers would like to see prices running above the 58.20 resistance and the 50.0% Fibonacci region of 58.58 in the near term to put faith in the recent rally. The next obstacle is coming from the 59.70 level, registered on May 30.

In brief, WTI oil futures are looking cautiously neutral in the very short-term, while in case of a climb above 58.20, it could continue the bullish structure. 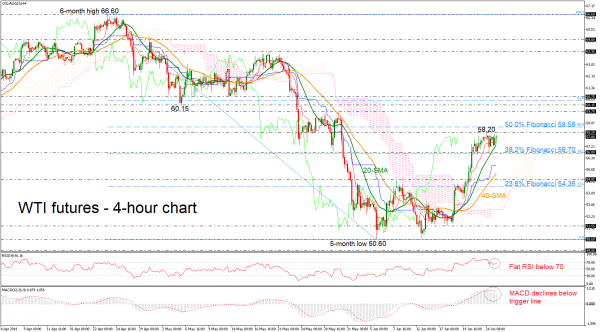 Gold Consolidates Above US 1800 But Oil Retreats